Clean engine and oil after 5 years at sea

A recent Infineum field trial of a marine lubricant using Group II base stocks ran successfully for more than 20,000 hours - five times longer than a typical test. Watch the outcome on video and read the views of the ship operator and formulators on this exciting achievement.

Watch the outcome on video

Base stock capacity in Europe has typically been Group I. However, recently we’ve seen a move towards Group II as refining capacity in Europe has been closing down. This change is a really positive change for automotive applications. However, for marine, it’s not quite such a good change. Marine applications use heavy fuel oil, which is almost the bottom of the barrel when you come to the refining process and it’s full of contaminants and asphaltenes, which are high molecular weight materials which have a tendency to agglomerate – they like to spend time together.

As we move to Group II, the natural solvency of the lubricant system is reduced. Meaning that those aphaltenes are no longer suspended in the formulation and being able to be taken to the centrifuge to remove the, causing deposits in the areas of the piston undercrown and in the cold parts of the engine causing black film or sludge, which can cause harm to the engine.

Infineum has been working as a collaborative team to identify booster solutions to address this problem and allow the use of Group II base stocks for TPEO applications. In 2011, we were in a position where we had evidence in the bench and engine tests that this product worked and in 2011 we took it to trial. We worked collaboratively with a company called Wagenborg and we successfully ran a 4,000 hour field trial, which was then extended to a period of five years, which was five times longer than it should have been.

This is the first successful Group II trunk piston engine oil field trial that has been run. Group II field trials have been run in the past, but these have failed due to excessive deposit build up. The typical field trial length is 4,000 hours. This field trial has run for more than 20,000 hours and has exceeded our expectations. It has run completely without issue and has had incredible performance.

We are operating in a very tough market at the moment, so the price comparing to the quality is very important, but also the availability of it. We would like to have good working engines, with less maintenance. What we noticed during the inspection in Norway after a year of testing; we pulled two pistons and the first thing the engine is said – “what a clean engine, we never have seen that before.” The oil was basically the same colour as when we put it in. Clean engine, clean oil, etc.

And when we opened up the crankcase doors, the first time, we noticed that the engine was very clean. We were amazed. We have three vessels, which we are calling the three plus types, they were dry docked at the same yard five years ago in Antwerp. Now we have dry docked them again at the same yard. If I compare the overhaul of the Vancouverborg and the Virginiaborg to this one, what we noticed is this engine is much, much, more cleaner than the other two. During the visual inspection of the liners was that the honing pattern was clearly visible after so many running hours that is amazing. But if I compared that to the other two vessels, these liners visually seem in a better condition and I expect the measurements should be within the tolerances. The oil remains clean and that was not only noticed by us, but it was also notified by engineers which were attending the vessel, so from that part I’m confident with Infineum, yeah.

Marine lubricants formulated with Group I base stocks and salicylate technology have delivered excellent protection to medium speed four-stroke marine engines for many years.

However, as the need to improve fuel economy and meet emissions legislation drives the automotive sector to higher quality base stocks, the demand for Group I has fallen. This has resulted in capacity reductions and plant closures, which has adversely affected price and availability. Conversely, the increased demand for higher quality Group II base stocks means new capacity has come on stream. High availability has driven down the cost of Group II, making its use in other applications, including marine trunk piston engine oils (TPEO), increasingly attractive.

While Group II base stocks bring a number of benefits, including enhanced oxidation and viscosity control, improved NOACK stability and better base number retention, their use in TPEO formulations also presents a number of challenges.

The biggest issue is the contamination of the lubricant by the fuel, in these applications typically using heavy fuel oil, which is almost the bottom of the barrel. These fuels contain high molecular weight materials called asphaltenes, which have a tendency to agglomerate.

As we move formulations from Group I to Group II the natural solvency of the lubricant system is reduced, which means asphaltenes are no longer suspended in the formulation and are less easily removed. This can result in deposits on the piston undercrown and the cold parts of the engine.

The deposits formed on the piston undercrown can prevent the lubricant from transferring heat away from the piston crown. This is a particular concern because this eventually leads to high temperature corrosion, which can cause severe engine damage.

Infineum has been working to identify booster solutions to improve asphaltene handling and deliver the required level of engine cleanliness. The new additive system has been combined with Infineum salicylate technology using Group II base stocks in a TPEO formulation.

Infineum carried out extensive bench and engine testing to validate the performance of the candidate oil. The positive results obtained enabled Infineum to take the product into a 4,000 hour field trial, which started in 2011. The trial was undertaken in collaboration with Wagenborg Shipping BV, an international shipping company that operates a modern fleet of 173 vessels.

The field trial for the new Infineum Group II marine lubricant formulation was carried out in the Victoriaborg, a Class 1A cargo vessel built in 2001. The ship is longer than a premier league football pitch and capable of carrying 450,000 cbft of freight. Powered by a Wärtsilä 6L38B engine, the vessel runs on heavy fuel oil in open waters and on marine gas oil in emission control areas to be compliant with sulphur regulations.

The initial test was scheduled to run for 4,000 hours, which for this type of ship would typically equate to one year of engine operation.

After a year of operation, we inspected two pistons and the engineers said they had never seen such a clean engine before and the oil was the same colour as when we put it in.

The pressure and temperature figures were so good that it was agreed that the trial could be extended. This decision was reviewed on an annual basis and, because the figures were acceptable, the trial continued until the subsequent dry docking – five years after the start.

The typical field trial length is 4,000 hours - this field trail has run for more than 20,000 hours and has exceeded our expectations. It has run completely without issue and has had incredible performance. 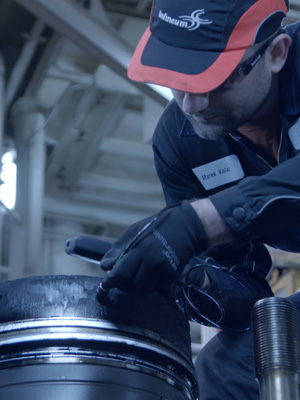 The engine was clean after 27,315 hours of operation

After five years, and 27,315 hours of engine operation, the ship sailed to Tallinn, Estonia for a scheduled inspection in the dry dock. When the crankcase doors were opened for the first time, the engineers were surprised at how clean the engine was after such an extended period of operation.

During the visual inspection of the liners we saw that the honing pattern was clearly visible – after so many running hours that was amazing.

The excellent condition of the oil and the engine was noted by representatives from Infineum, the shipping company and by the independent engineers who carried out the overhaul.

The new Infineum TPEO formulation using Group II base stocks kept the ship’s engine clean and ran without any issues over the extended field trial, which ran for more than 20,000 hours. These results indicate that formulations using the new Infineum technology can deliver the level of performance users have come to expect from Group I products.

The booster solution improves asphaltene handling and allows future TPEO formulations to benefit from the advantages offered by Group II base stocks.

As a result of this activity, Infineum has gained OEM approval for the new Group II product.