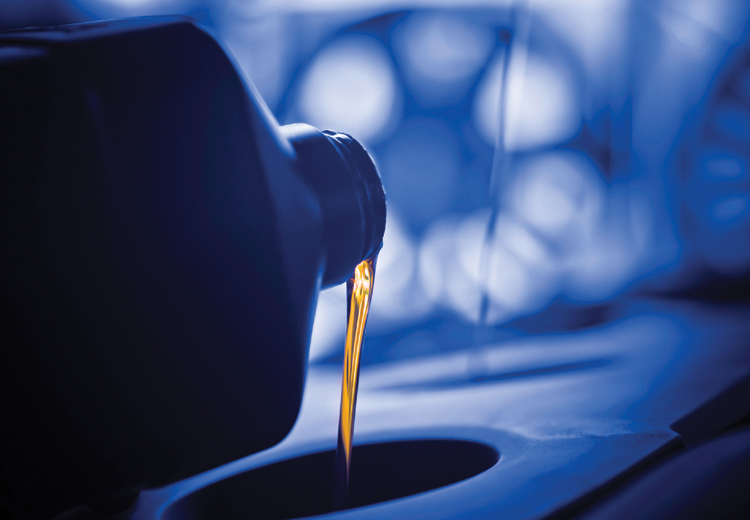 Kazuo Yamamori, Project Manager of the Tribology Material Department at Toyota Motor Corporation, talks to Taisuke Miyoshi, Infineum IL & Technical Advisor, about the drivers for the new JASO GLV-1 ultra-low-viscosity gasoline passenger car engine oil specification and explains how industry is co-operating to ensure remaining tasks are completed in preparation for its release in April 2019.

Fuel consumption and CO2 emissions regulations for passenger cars and commercial vehicles are being tightened in a number of countries across the globe as governments work to meet their carbon reduction obligations.

As a result, OEMs are looking right across the vehicle for fuel economy improvements. Powertrain electrification is one of the headline-grabbing options being explored. But, despite the anticipated investment in charging infrastructure and battery technology improvements, it is likely that by 2035 some 80% of vehicles sold will still contain an internal combustion engine (ICE). Strong growth is expected in battery electric and fuel cell electric vehicle sales post 2035. But, looking right out as far as 2050, around 60% of vehicles sold are still expected to contain an ICE – predominantly in the form of plug-in and conventional gasoline hybrids.

Fuel economy contributions from the engine oil are an important part of the equation and the use of lower viscosity fluids, which reduce hydrodynamic friction, is one of the strategies being employed. However, there is a careful balance to be struck in that these thinner lubricants must also assure sufficient hardware protection at much higher thermal loading and over longer service intervals.

Industry engine oil standards have been introduced that are used widely across the globe to provide baseline engine protection to the majority of the vehicle fleet. When used as recommended, lubricants meeting these requirements are expected to deliver a level of performance on which marketers, OEMs and consumers can rely. The current North American ILSAC GF-5 and API SN specifications cover viscosity grades at and above SAE 0W-16, while the European ACEA specifications are for SAE 0W-20 or higher. Both are under revision and are expected to be released some time in 2020.

Japanese OEMs have taken the initiative in the transition to lower and lower viscosity grades. The move to SAE 0W-20 oil began in around 1980, with first market introduction in 2000. Since then SAE J300, which defines the limits for engine oils in rheological terms, has been regularly revised. In 2010 the first SAE 0W-16 ‘style’ product was introduced and in 2013 SAE J300 was changed to cover SAE xW-16, with the first oils being delivered very shortly afterwards. SAE xW-12 and xW-8 viscosity grades were included in the SAE J300 standard in January 2015.

Japan continues to lead the way in the move to lower viscosity and the latest specification development includes SAE 0W-8 viscosity grade, for which HTHS is between 1.7 and 2.0 mPa.s and KV100 is 4.0 - 6.1 mm2/s.

While the ILSAC GF-6B performance standard is appropriate for existing SAE 0W-16 oils, Japanese OEMs are keen to introduce extra-low viscosity engine oils. To this end, work has begun on the development of a JASO standard for SAE 0W-8 viscosity grade that will use the standard ILSAC GF-6 durability tests. However, the Sequence VIF test, used to evaluate fuel economy, is not applicable for viscosity grades at or below SAE 0W-12, which highlighted the need for a new fuel economy test method.

The Japan Automobile Manufacturers Association and Petroleum Association of Japan (PAJ) formed the JASO Next Generation Engine Oil Task Force (TF) to work on the new fuel economy test method and to create a draft standard. Through 2017, TF activity focused on the development of the new fuel economy engine test and on a feasibility check of the compatibility of the ILSAC GF-6 tests with SAE 0W-8 oils.

The TF finalised the JASO test procedure and completed the verification of the draft specification in mid-2018, allowing the Society of Automotive Engineers of Japan (JSAE) to carry out the standardisation work by year-end. The preparation of the JASO standard application manual and approval preparation are now underway. The whole process has required strong collaboration between the TF, Japan Lubricating Oil Society (JALOS) Lube Quality Committee and JSAE. 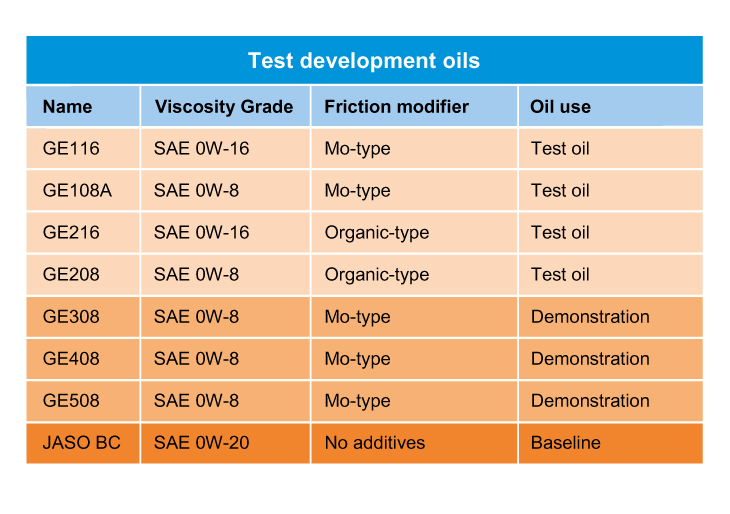 The fired engine fuel economy test procedure is run using a Toyota 2ZR-FXE, 1.797 cc engine, which is a roller type valve train hybrid vehicle engine. Four laboratories took part in round robin testing of the test oils and results indicated that the SAE 0W-8 Mo oil demonstrated 0.5% fuel economy improvement over SAE 0W-16 OFM oil. While there was some variability between the test sites, repeatability and reproducibility were good, with the mean standard deviation equivalent to or better than Sequence VIE/VIF tests.

The 1.1%, proposed fuel economy limit for the JASO GLV-1 specification, has been set based on the test results from GE108A and GE308. This limit will also discriminate against GE216.

Tests in a Nissan MR20DD, 2.0l engine running in a real vehicle, were used to confirm the results observed in the motored engine tests and to establish a method to calculate the Japanese and European WLTC fuel economy improvement. This MR20DD motoring fuel economy test was able to discriminate between the SAE 0W-8 and Mo FM effect.

The standard ILSAC GF-6 durability tests will be used in the new JASO specification, although limits for these tests are still under discussion. 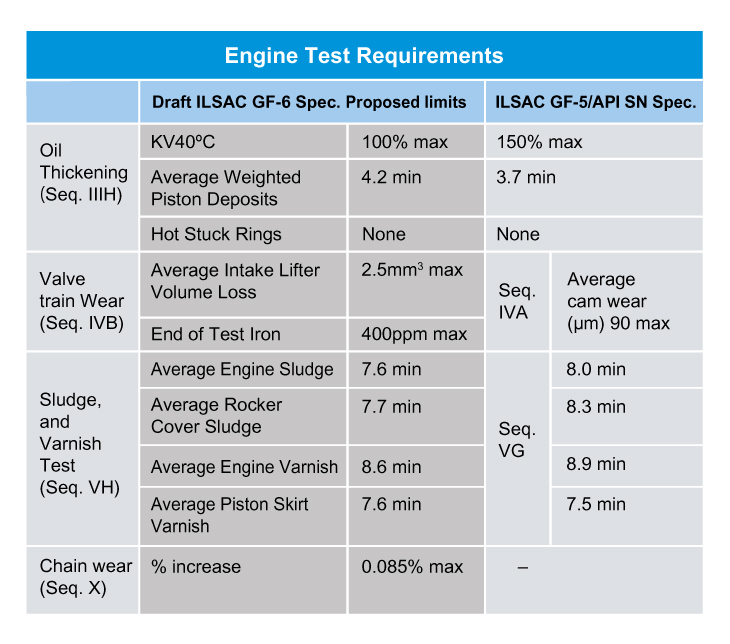 The two SAE 0W-8 reference oils, one Mo type and one organic type and the three demonstration oils were used to assess ILSAC GF-6 performance levels. Test results in the Sequence IVB, X and VH confirmed these tests can be applied to SAE 0W-8 oils.

The successful evaluation of the demonstration oils means it has been possible to draft the final JASO GLV-1 specification. 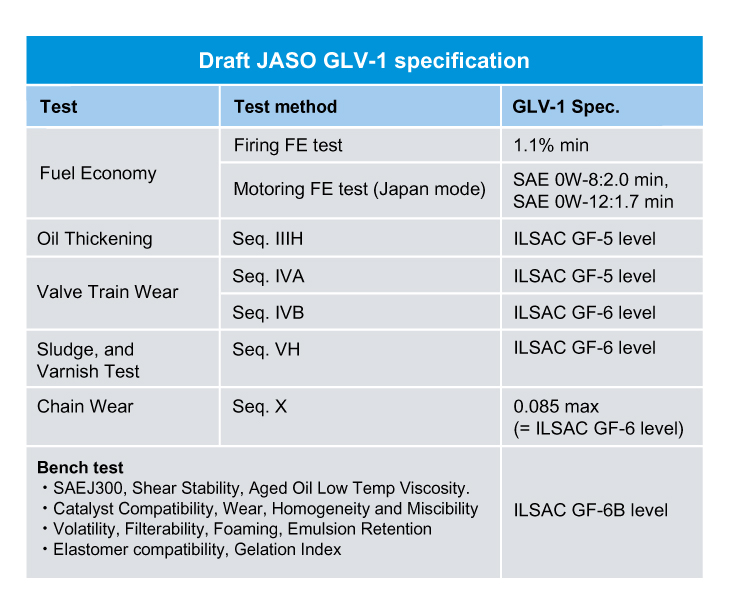 For the fuel economy test, either the fired engine or MR20DD motoring test can be used. In future ILSAC specifications it would be preferable to use the fired engine test, but a motoring test with sliding follower would also be acceptable. In this draft, the Sequence IVA has been accepted as the valve train wear test since the limit for the Sequence IVB in ILSAC GF-6 has not yet been finalised. The Sequence X chain wear test is a new test for ILSAC GF-6 and, since there is no equivalent test in ILSAC GF-5, the proposed limit of 0.085 max is being tentatively applied. However, once the ILSAC GF-6 limits for these tests have been finalised the JASO GLV-1 specification will adopt them. The other bench tests used will also follow ILSAC GF-6B limits.

The result of strong industry collaboration means that the new JASO specification is on track to be released in April 2019.

This means the targeted date for market introduction of the ultra-low viscosity JASO GLV-1 standard is October 2019 – well ahead of the anticipated date of ILSAC GF-6.

More than a chemical signature