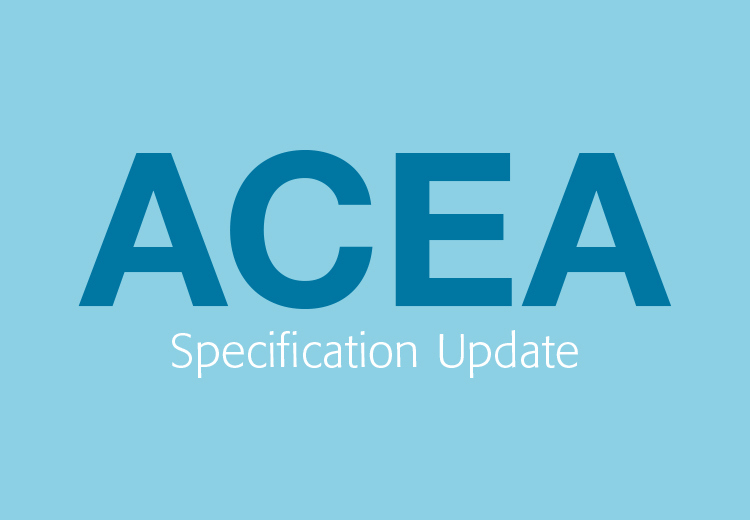 As the revisions to the ACEA Oil Sequences near completion, Uwe Zimmer, Infineum Industry Liaison Advisor reports on the unprecedented changes that have been made on the light-duty side and what they might mean for future lubricant formulations.

In January 2019, Insight reported about the upcoming ACEA Oil sequences with a projected release by end of 2020. Well, 2020 is gone and we haven’t seen an ACEA Sequence release yet, so what is going on?

We expect to see at least one more revision of the ACEA 2016 Light-Duty Oil Sequences to address the imminent drop out of the VW TDI2 (CEC L-78-99).

The release of the next ACEA Light-Duty Oil Sequences is now planned for springtime 2021.  We are expecting an unprecedented degree of change.

Two categories will be removed, to make space for two new categories. The new categories will come with additional engine tests on three performance parameters new to the ACEA Sequences, plus a new fuel economy test for ACEA C6. At the same time maintenance activities take place to replace three tests coming to end of life by successor tests and reintroduce a test for gasoline engine valvetrain wear. Not to mention tighter elastomer limits and some other more minor changes.

There was a pragmatic driver for removing some ‘old’ categories to make space for the new categories. Just adding more categories would have resulted in unmanageable complexity and a specification system that would be hard for the end user to understand.

A3/B3 and C1 categories will no longer be maintained. This reflects how the needs and markets have evolved. When introduced in the 1990s the differentiation between A3/B3 and A3/B4 was on diesel engine technology, with A3/B3 for pre-chamber diesel engine and A3/B4 targeting direct injection diesel engines. With the former technology now being history the need for A3/B3 became questionable.

For C1 the line of thinking is different, here the decision not to continue this category is more a reflection of limited uptake from OEMs and the market for lubricants according to the low phosphorus and sulphated ash requirements stipulated in C1. The guiding principle here is that ACEA categories should reflect common needs of the ACEA OEMs rather that specific needs of individual OEMs.

Beside some significant maintenance activities, the legacy categories, A3/B4, A5/B5 and C2 to C5, remain as they are.

What is new in the ACEA 2021 legacy categories?

The M271Evo is meant to replace the M271 at equal severity, despite the M271Evo test method itself being more severe. Hence, the job to be done was to compensate for this with appropriate limits. Limits were defined in the context of ACEA 2016 sequence maintenance and these limits are expected to carry over to the 2021 Sequences.

The VW TDI3 (CEC L-117) will replace the current TDI test. Again, equal severity is targeted for the legacy categories and we face the situation that the successor test is more severe. ACEA, in collaboration with ATC and ATIEL (AAA) is still busy defining suitable limits.

The Sequence IVB stands out as it is not meant to be a direct successor of any particular test but rather to fill the gap the TU3 left behind half a decade ago for a gasoline valvetrain wear test. The Sequence IVB is on Toyota hardware and has been developed for API SP / ILSAC GF-6. There is significant debate in AAA about suitable Sequence IVB limits for the ACEA Sequences. The starting point was to carry over the API SP limits, however, industry data gathered on representative ACEA oils suggest API SP limits are not appropriate as they would exclude about 50% of the tested ACEA lubricants with known good field performance.

AAA debate about appropriate limits has not concluded yet. As a first measure, to mitigate the impact on current ACEA lubricants, it has been agreed to allow the Sequence IVA as an alternative to the Sequence IVB, at least for the legacy categories.

Similar to the TDI3 the Sequence IVB has the potential to be disruptive if the ACEA limits are not compatible with the current ACEA lubricant population.

In summary we are seeing significant changes in the legacy categories which may have wide reaching implications to the current ACEA lubricant portfolio. Mitigating the impact and maintaining the integrity of the sequences is the common objective AAA is working towards.

There will be two new categories introducing the long-awaited low speed pre-ignition (LSPI) performance as a key feature. Those who have followed the API category developments will know that API issued API SN Plus to fast track the introduction of this performance feature.

A7/B7 is a new category building on A5/B5. The new features are protection against LSPI, a chain wear requirement to address wear concerns with gasoline direct injected engines and finally an all new turbocharger compressor cleanliness requirement as a preventative measure. We will discuss test details later in this article.

C6 is the corresponding reduced SAPS category, built on C5, adding the same features as A7/B7, but on top of it a new fuel economy test.

C6 is considered the most important new ACEA category as it provides aftertreatment compatibility and LSPI performance for the very important SAE XW-20 viscosity grades.

What do the new categories bring?

Further to the engine test requirements the new categories may also introduce a new TBN specification by ASTM D4739, although ATC and ATIEL strongly advised against this parameter as a fresh oil specification. The topic caused controversy within AAA and could not be resolved to everybody’s satisfaction. Such instances are rare, but ACEA’s thinking on this parameter remains unclear.

The Sequence IX LSPI test is well known in the industry, it was developed on Ford hardware for the API specifications and was first introduced to API SN Plus. Its introduction into A7/B7 and C6 is planned at API SP limits, which is supported by all stakeholders.

The A7/B7 and C6 chain wear requirement is also specified by a test developed on Ford hardware for ILSAC GF-6 - the Sequence X. There are similarities to the Sequence IVB in the sense that the introduction at the proposed API SP limits would rule out 50% of the lubricants represented in the industry data gathering mentioned above. Discussions are ongoing about how to define limits appropriate for ACEA lubricants, which are subject to different chemical constrains than API lubricants. All parties agree with the need for chain wear protection. However, given the fact that gasoline direct injection engines have been the predominate gasoline technology in Europe for almost a decade, questions arise on how much additional protection is needed. One party not being prepared to give any compromise on the limit makes finding a mutually agreeable limit look unlikely.

The CEC L-114 has been pre-developed by Toyota and completed by CEC to assess the lubricant contribution to turbocharger compressor deposits (TCCD). This diesel engine test on Toyota hardware will also find its way into the new categories A7/B7 and C6. The objective here is to promote better lubricant performance on this parameter. You can imagine the difficulty to agree limits on a completely new parameter. No surprise these discussions have not concluded yet.

Finally, we have the JASO M366 fuel economy test for introduction in C6 only, not at least to smooth the path for a wider application in the ACEA Sequences once the M111FE (CEC L-54) becomes unavailable. Projections about M111FE lifetime vary, but for subsequent ACEA Sequence issues, ACEA will need an alternative. The JASO M366 has been developed in Japan on Toyota hardware for the JASO GLV-1 specification with a focus on SAE 0W-8 and 0W-12 lubricants.

Meanwhile the JASO FE test is also available at European laboratories. With support from Toyota and the European labs, work is ongoing to see how representative ACEA lubricants perform in the test. To date the database of ACEA lubricants is small and consequently defining limits is an incredibly difficult task.

There are sometimes ‘heated’ debates about how to implement a test in the ACEA Sequences, but overall there is good collaboration and the JASO FE test is a good example of jointly bringing a test into the European Engine Lubricant Quality Management System (EELQMS), which is the quality backbone of the ACEA Engine Oil Sequences.

What is happening now?

Discussing limits on a test by test basis is already a complex task, discussing requirements in the full context of the ACEA categories is significantly more complex due to the trade-offs between requirements.

Looking at a second example. Depending how severe the limits are set, a test responding to lubricant volatility, where less volatile lubricants tend to give better results, could drive the cost of ACEA lubricants beyond the cost of today’s OEM top-tier lubricants. At the same time OEMs and end customers are keen to have cost effective lubricants.

The industry needs to avoid a scenario where the ACEA specifications drive lubricant cost, beyond that of OEM lubricants.

Aside from the business case, ACEA C6 has the potential to become the most important new ACEA category. It provides aftertreatment compatibility and LSPI performance for the very important SAE XW-20 viscosity grades, but equally it has the potential to remain a niche specification if technical hurdles can not be overcome or economics do not work out.

ACEA has a very difficult task to define the 2021 ACEA Engine Oil Sequences. In this process ACEA heavily relies on ATC and ATIEL to provide input, so that this complex multidimensional equation can be solved. Work is underway to support this.

Ultimately all stakeholders have a common objective of meaningful, fit for purpose ACEA specifications defining the baseline requirements. We will keep you posted on the progress.