Please note this article was published in July 2015 and the facts and opinions expressed may no longer be valid.

Motorcycles rev up in Southern Asia 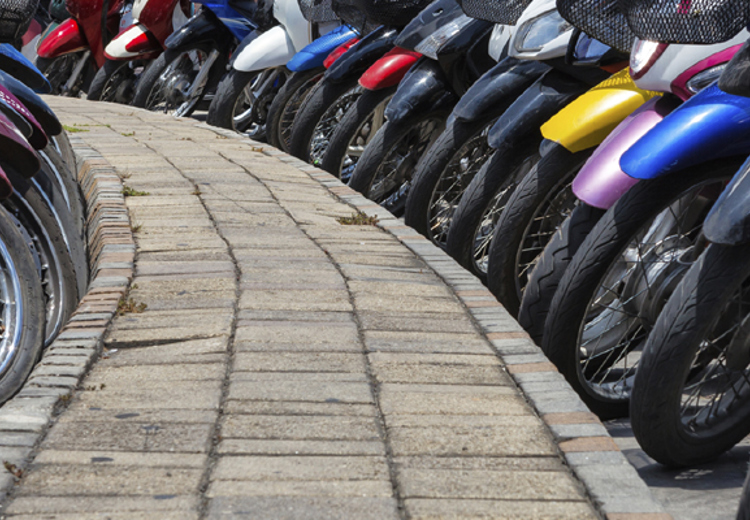 As the use of motorcycles continues to grow steadily, half a billion bikes are expected to be on the world’s roads by the end of this year - more than 70% of which will be in Asia Pacific.

However, sales growth is far from uniform across the globe. While the compound annual growth rate (CAGR) in Asia has registered a healthy 2% over the past five years, and Latin America has recorded a huge 7% CAGR increase, other regions, including Europe and North America, have registered slower growth.

It is hardly surprising then that Asia accounts for around 90% of global motorcycle production and almost 80% of global sales. Some of the most exciting growth markets are in the Southern Asian countries of India, Indonesia, Vietnam and Thailand. 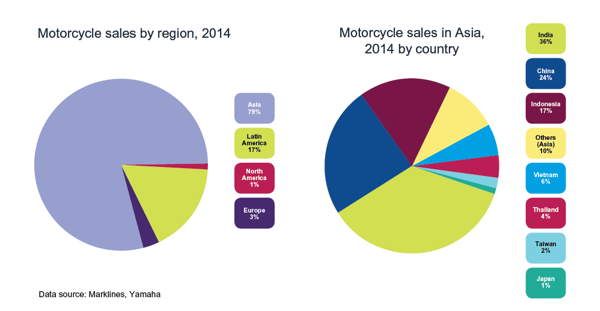 To gain a better understanding of the lubrication requirements in these growth markets Infineum conducted a survey of the four-stroke (4T) motorcycle market. 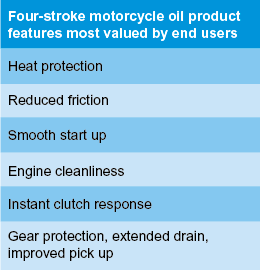 The survey focused on four of the major markets, Indonesia, India, Thailand and Vietnam, which together account for more than 45% of the world’s motorcycle population. 1,000 end users and 200 workshop owners were interviewed about their lubricant selection criteria.

To further explore quality as a key theme, users were asked to rank the product features they value most – with heat protection ranking first in the top six.

Focus groups revealed that Indonesia, India and Thailand – where product quality ranks highest – have the most potential demand for premium motorcycle products.

Riders here particularly value a smooth and quiet ride, and are looking for engine and heat protection. The concept of extended oil drain interval appears to only exist as a niche segment for high mileage bikes in markets like India and Thailand.

To provide discernible performance advantages in the key areas highlighted by our market survey, Infineum developed a motorcycle oil additive technology that can be used to formulate premium motorcycle oils. This technology is capable of delivering the next generation attributes which include: resistance to thermal stress, engine cleanliness, engine protection, clutch friction durability and gear protection and is developed to be above and beyond the performance described in current industry motorcycle specifications.

To assess the performance of the new technology, Infineum formulated SAE 5W-30 and 10W-40 prototype oils, which were tested both in the laboratory and in field trials.

One of the primary functions of any oil is cooling the engine. But, because they operate at higher temperatures and have a smaller oil volume than passenger cars motorcycles tend to generate considerably more heat.

These high operating temperatures increase the level of oxidation and the risk of oil viscosity increase over time, which means it is important for a premium lubricant to demonstrate good viscosity control over the entire oil drain interval. 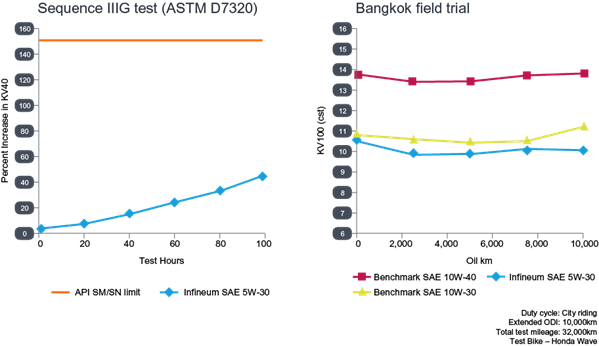 End users believe that a clean engine means they will benefit from smooth engine start up and easy acceleration.

These results were confirmed in the Bangkok field trial using an SAE 5W-30 oil formulated with the new additive technology, where good control of piston and cylinder deposits was observed.

In the eyes of end users, engine protection is essential to achieve optimum engine performance and ensure engine durability. Using the new additive technology in an SAE 10W-40 formulation, superior wear protection was noted in the industry wear test, even when the test duration was extended by 50%.

To further assess the level of engine protection an SAE 5W-30 prototype oil was tested in the field and demonstrated better wear performance, as exemplified through iron increase in the oil, when compared against the benchmark SAE 10W-40 oil, despite having the lowest phosphorus level. The benchmark SAE 10W-30 oil, which performed even better, was later used to determine the final phosphorus content of the new Infineum SAE 5W-30 additive technology. 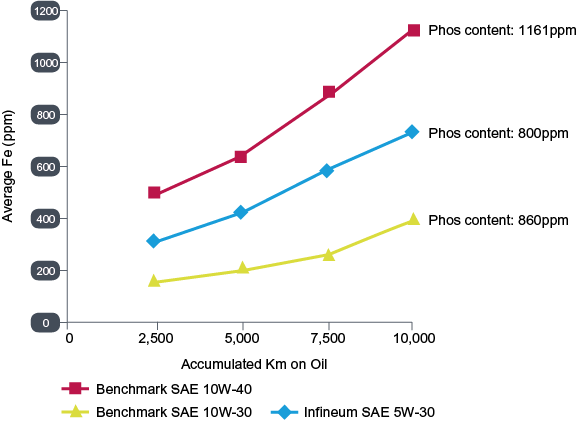 Motorcyclists look for smooth or fast clutch engagement as a demonstration of engine performance. And, because the vast majority of motorbikes have manual gearboxes, any deterioration in clutch performance is very evident to the rider through poor clutch feel and rough gear changes.

The current motorcycle oil specification measures clutch performance using the JASO T903 clutch friction test over 1,000 cycles or gear changes. This is estimated to represent approximately 700 km under real world driving conditions. Based on this assumption, the average oil drain interval of 4,500 km would equate to 7,000 cycles in the JASO friction test.

To demonstrate the performance of the new additive technology, Infineum tripled the number of friction test cycles. The SAE 5W-30 test oil maintained the JASO MA2 friction level throughout the test, while the benchmark oils showed a decrease in dynamic friction to JASO MA at the end of 3,000 cycles.

Gear pitting translates to unacceptable vibration and noise levels, which can be felt by the rider. As passenger car oils move towards lower viscosities and lower phosphorus levels their potential to cause gear pitting when used in motorcycles increases. The JASO T903 2011 standard specifies a minimum HTHS of 2.9 mPa.s for gear pitting protection since OEMs have reported issues with oils formulated to 2.9 HTHS or lower.

There is currently no test in the JASO motorcycle oil standard to evaluate gear pitting performance and the JAMA workgroup is currently developing a new test to address this shortfall. However, it is unlikely to be ready for inclusion in the next JASO revision – expected in 2016.

Motorcycle OEMs rely on HTHS measurements as one form of gear pitting protection. By formulating close to the HTHS of the benchmark oils, Infineum SAE 5W-30 additive technology achieved similar pitting performance as measured by the average hours to pitting.

At the end of the test, the Infineum SAE 5W-30 additive technology outperformed benchmark oils as measured by the average pitting and weight loss at failure. 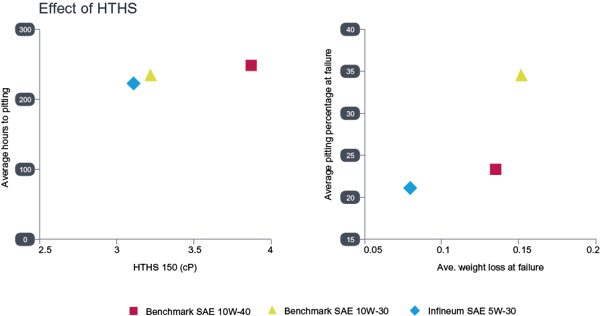 As the lubrication requirements of passenger cars and motorcycles continue to diverge, the need for oils specifically tailored for motorcycles increases.

In the near future, revisions to the JASO specification aim to better discriminate between good and poorer performing oils in the areas of clutch friction durability and gear pitting protection. This move addresses the increasing divergence between the lubrication needs of passenger cars and motorcycles.

In readiness for this, and to meet the requirements for premium products in the growing markets of Asia, Infineum has developed a novel motorcycle additive technology that addresses end users’ needs. In addition it is also capable of delivering the next generation attributes beyond the minimum requirement of the JASO specifications.

Infineum technology demonstrates that lower viscosity motorcycle oils, with the correct formulation, can provide equal hardware durability to that of higher viscosity grades.

The new Infineum technology is designed to help motorcycle engine oil marketers to capitalise on the opportunities presented by the premium markets that are emerging in Southern Asia.