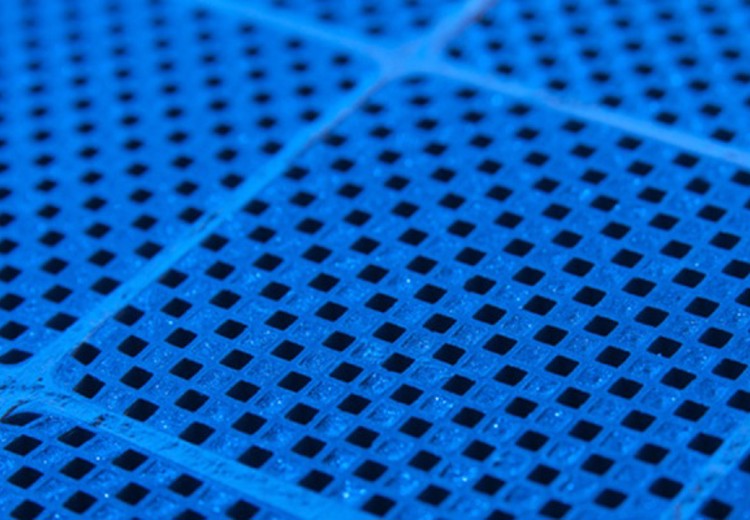 India’s population topped the billion-mark back in 1998 and has continued on a steady upward trajectory. Today, it is in second place, behind China, on the leaderboard of the largest countries by population. This growth, combined with increased urbanisation and improved individual wealth, has fuelled demand for personal mobility. And, although two-wheeled vehicles still hold some 80% of the domestic market, passenger car sales are growing. 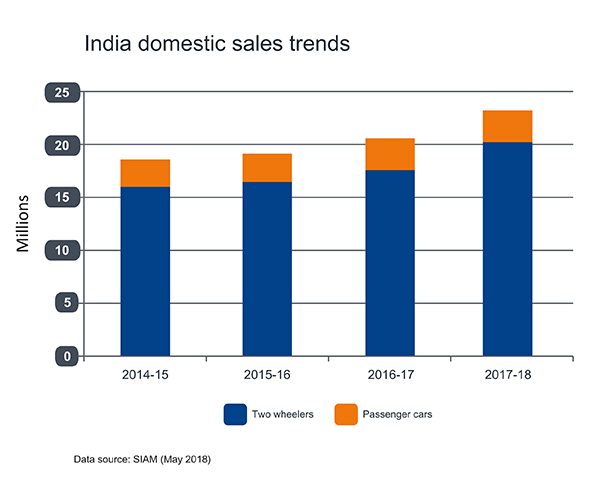 In 2017, sales of passenger cars rose the fastest in four years, reaching in excess of three million, with the strongest growth in the sports utility segment. It is estimated that there are already more than 230 million vehicles on India’s roads, and sales forecasts remain strong for the future. This might be good news for the world’s automakers, but is less welcome in terms of pollution and congestion in the densely populated cities. World Health Organization (WHO) data shows that, when looking at the small particulate matter of 2.5 microns or less in diameter, known as PM 2.5, 14 of the world’s 20 most polluted cities are in India.

This situation has prompted the Indian Government to introduce tougher emissions regulations. The current Bharat Stage (BS) IV limits (equivalent to Euro 4), which were introduced nationwide in 2017, will be replaced by BS-VI (equivalent to Euro 6) for all new vehicles nationwide from April 1 2020. Their action completely leapfrogs the previously proposed BS-V, and dramatically reduces permissible levels of a number of pollutants including PM 2.5 and NOx. In view of the serious pollution levels that have been recorded in New Delhi, the introduction of BS-VI fuels in the National Capital Region, an area surrounding the capital city, was advanced to April 2018 – two years ahead of the deadline.

According to WHO, ambient air pollution, in both cities and rural areas, was estimated to cause 4.2 million premature deaths worldwide in 2016; this mortality, it says, comes from exposure to PM2.5, which can cause cardiovascular and respiratory diseases, and cancers. The new BS-VI regulations cut PM by more than 80% from current limits. In addition, BS-VI introduces a limit for particulate number (PN) as a new parameter, with a limit of 6 x 1011 #/Km.

Diesel particulate filters are one of the exhaust gas aftertreatment options that have been adopted as an effective means of reducing both PM and PN. To comply with the strict limits in BS-VI the introduction of DPFs in Indian diesel vehicles seems inevitable.

These devices are very efficient at trapping the soot and fine particles contained in the exhaust gas; preventing their release out of the tailpipe. However, over time the trapped soot accumulates in the filter, which if not removed increases backpressure. High backpressure, caused by an overloaded DPF can compromise engine performance, increase fuel consumption and eventually lead to DPF failure or vehicle breakdown. To prevent this, the DPF must be periodically regenerated to remove the soot. However, the efficiency of regeneration is dependent on the exhaust gas temperature and thus on driving conditions.

Catalysed DPF (cDPF) is the most common particulate trap technology currently used in European vehicles. Here, the cDPF’s platinum catalytic coating is used to convert nitrogen oxide (NO) in the exhaust to nitrogen dioxide (NO2). The NO2 then reacts with soot at low temperatures and provides continuous soot burning, which is known as passive regeneration. For effective passive regeneration, exhaust temperatures must be maintained at ~350°C for a significant time period during vehicle operation. However, the low average speeds, frequent start/stop events, lengthy idling periods and short distances typical of city driving can make passive regeneration conditions difficult to achieve, which hinders regeneration efficiency.

It is therefore likely that high frequencies of active regeneration events will be required in India’s predominantly city-based diesel vehicles. Active regeneration is the combustion of soot in oxygen, which occurs at temperatures exceeding 550°C. To achieve these high exhaust gas temperatures, post or late fuel injection strategies are required, which means active regeneration often incurs a significant fuel economy penalty. The combination of these factors means the European aftertreatment layout may not, in all cases, be the most suitable for Indian OEMs.

Unlike cDPF technology, the FBC system relies on oxygen to achieve soot combustion in the filter. Because the FBC enables faster regeneration at lower temperatures it is highly suited to city driving conditions and is completely independent of NOx concentrations.

The FBC additive, which has been VERT® (Verification of Emission Reduction Technologies) certified, has been successfully used in the field for over 250 billion vehicle kilometres. With the growing worldwide adoption of DPFs, Infineum commissioned a study to compare different regeneration strategies in Euro 5 engines fitted with either a cDPF or an uncatalysed (bare) DPF with FBC.

OEM costs can be reduced by removing platinum group metal (PGM) content from the DPF. And, building on this, as the FBC lowers the temperature required to achieve active regeneration and is independent of NOx concentration, the option to reduce the PGM content of the diesel oxidation catalyst is also provided.

When the FBC additive, was used in conjunction with a cDPF, regeneration intervals increased, demonstrating that the FBC can also enhance regeneration alongside a catalysed filter. 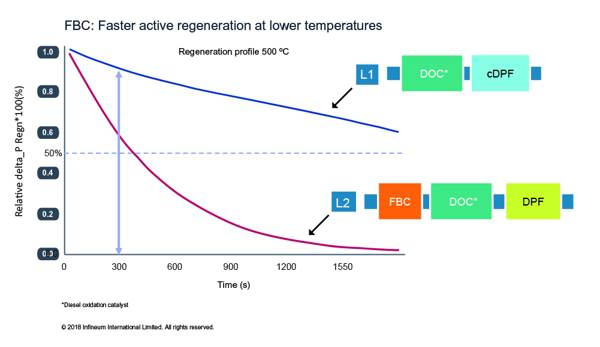 In addition, the study revealed that it is possible to gain more than 2% total fuel consumption savings with the FBC-DPF set up compared to the cDPF, since there is significant reduction in the fuel consumption penalty from regeneration (reduced temperature, time and frequency) and DPF porosity (lower inherent backpressure with bare DPF).

The benefit of FBC use has also been established in Euro 6 engines, where tighter NOx emissions limits must be met. These lower NOx emission limits will be introduced to India in BS-VI, which means OEMs will need to introduce NOx aftertreatment technology, such as selective catalytic reduction (SCR), into their vehicles. 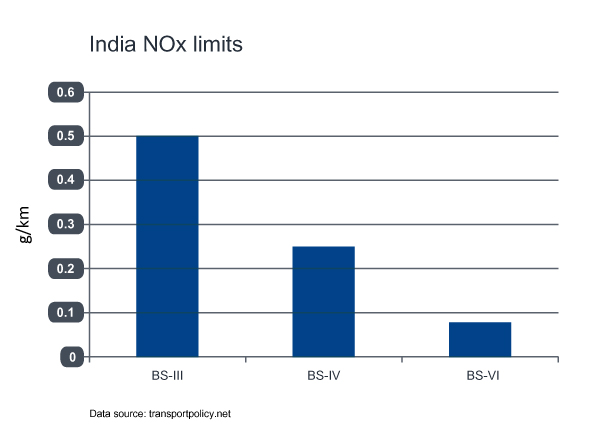 Passive regeneration’s dependence on NOx concentration can put restrictions on aftertreatment configuration in that a cDPF must be placed upstream of any NOx abatement technology. Because the Infineum FBC additive uses oxygen rather than NOx to enable regeneration it is fully compatible with a range of NOx reduction systems.

Since engine-out soot emissions are also lowered by the FBC, there is less risk of ‘face-plugging’, due to the build up of soot on the front face of the catalyst substrate. Additionally, the potential to use higher exhaust gas recirculation (EGR) rates provides an opportunity to use a smaller NOx aftertreatment catalyst, providing benefits for aftertreatment system packaging where space is limited.