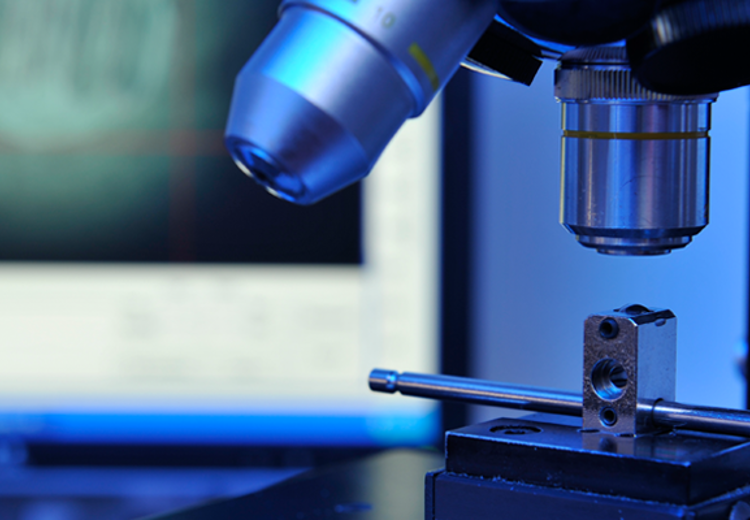 Continued advances in vehicle hardware and the increased use of more complex fuels, mean it is important to check that industry tests can still identify fuels that are fit for use. Ben Hornby, Infineum Technologist – Fuels Component and Formulation Science, assesses the HFRR test to see if it is still the best tool for measuring lubricity in today’s more complex world.

The high frequency reciprocating rig (HFRR) test was developed almost 20 years ago to measure the lubricity of diesel fuel. But, since its development the diesel fuel world has been through a period of significant change.

Fuel sulphur has fallen dramatically, crude sources have changed and the use of biofuels and highly paraffinic diesel has increased. On top of that, there have been significant improvements in vehicle hardware and in the materials used in some of the critical areas. 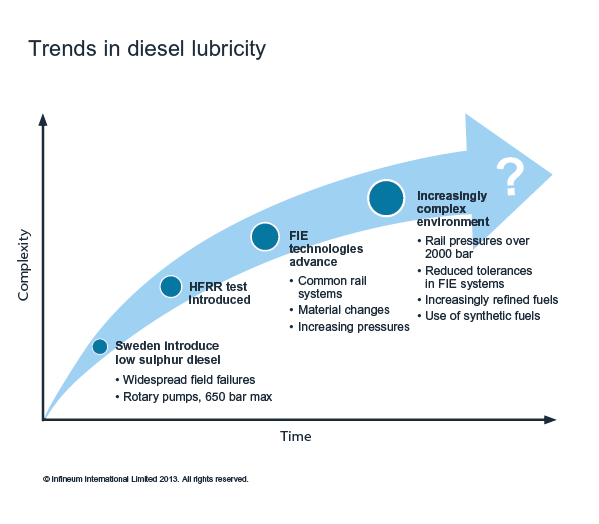 The specifications governing diesel fuel quality have gradually tightened in response to these changes to ensure the fuel at the pumps is fit for purpose and offers adequate protection to the advanced hardware used in today’s vehicles. While there have been no reported field issues related to lubricity, which indicates the HFRR test is doing its job, all these changes mean it is essential to ensure the test is still fit for purpose.

Lubricity is a critical parameter

Vehicle manufactures see diesel fuel lubricity as a critical parameter because certain parts of the fuel injection equipment (FIE) depend entirely on the fuel for lubrication. For example, a fuel with poor lubricity can cause catastrophic levels of wear to critical pump components resulting in fuel pump failure.

The lubricity of diesel fuel is defined by its ability to prevent or minimise wear in these critical areas and is a function of the way it has been refined and blended. For example, hydrotreatment to remove sulphur and the blending of diesel with kerosene to improve low temperature performance both lower the fuel’s lubricity. But, on the other hand, lubricity improver additives and the blending of fatty acid methyl ester (FAME) into diesel both improve lubricity.

Data from the 2004-2010 Infineum Worldwide Winter Diesel Fuel Quality Surveys showed an improving picture for lubricity, associated with additive treatment and increasing FAME use. In 2010 the majority of countries surveyed had an average HFRR wear scar diameter below the Worldwide Fuel Charter recommendation. 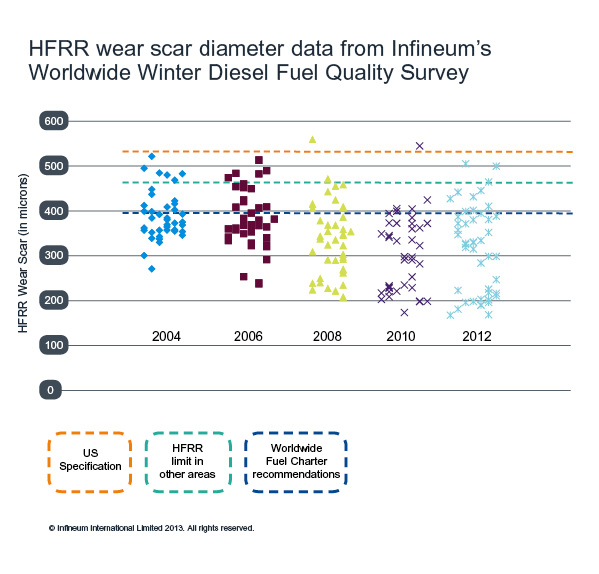 However, in 2012 a stalling in this downward trend was observed, which may be attributable to a combination of the backing off of FAME use and the tough economic climate. Whatever the driver for this trend it is clear that the accurate measurement of this important fuel characteristic is essential to ensure diesel fuels are fit for use.

The HFRR test is the industry standard method for determining lubricity, and over its lifetime its appropriateness has been reconfirmed in a number of research projects.

In 2009, for example, Infineum took part in a study, which looked at the reproducibility, precision, correlation with field data and ease of use of the HFRR test. The results clearly demonstrated that, at that point in time, the HFRR test was the best method for determining lubricity.

The considerable change in the diesel fuel market, and the increased concerns over the use of highly paraffinic fuels combined with substantial advances in fuel injection equipment have prompted Infineum to reassess the suitability of the HFRR laboratory test.

The aim of the recent work carried out by Infineum was to understand the impact of more severe contact conditions on fuel lubrication so that the industry will be ready if future FIE is more severe and requires additional protection.

The investigation looked at the development potential of the HFRR test by examining how changes in the test conditions, for example load, frequency, stroke length and additive treat rate, impact the lubricity behaviour of fossil and more advanced diesel fuels. In addition, the impact of other changes to the FIE, for example coatings and fuel components, were investigated.

The research programme concluded that although increasing the HFRR load increased the size of the wear scar it did not affect additive performance. The most significant parameter affecting the results of the HFRR test is the presence of lubricity additives that can:

The research also looked at the impact of phosphate-based surface coatings, which are used to improve the antiwear performance of engineered parts. The data indicates that these coatings do not replace the need for fuels with good lubricity, but the presence of additives can help to prolong the coatings’ lifetime.

In our investigation of fuel components, cetane improvers competed with the lubricity additives, thus increasing the wear in the HFRR. However, this effect was not observed when ester-based additives were used at higher treat rates in the fuels tested.

This work demonstrates that HFRR is a suitable test for evaluating the wear performance of fuels.

It also shows that the delivery of enhanced protection to more advanced hardware is likely to be achieved through increasing the level of lubricity additives to give fuels with a lower wear scar diameter.

As a leading technology company Infineum is committed to ensuring the tests and procedures it uses are the most appropriate to protect the FIE.

The full results of this HFRR study are published in SAE paper 2013-01-2688 titled: Pushing the Boundaries of the HFRR: Impact of Increased Test Severity on Wear by Ben Hornby, Georgina Cuckston, Rinaldo Caprotti and Iain More from Infineum UK Ltd.

The HFRR test was first pioneered by Imperial College London. In 1994 Rinaldo Caprotti and one of his colleagues at Exxon Chemical’s PARAMINS additive division (which later became part of Infineum), joined with Imperial College, London and Robert Bosch GmbH to develop the technique into a highly reproducible and accurate measurement of lubricity in diesel fuels. The results of this work were presented at the 9th International colloquium, ecological and economic aspects of tribology in 1994. In this paper, the repeatability of the test was assessed over ten tests on the same Class 1 untreated fuel under the same conditions and using a single batch of test components. The mean wear scar diameter was 651 mm and the standard deviation 10.3 mm. Confidence in the test was further verified by excellent correlation with field trial data.

The test was offered to the petroleum industry for evaluation. In 1995, following a test programme conducted by the International Organisation for Standardisation and the Co-ordinating European Council (CEC), the test was adopted by both organisations as the industry test method for lubricity.

In the HFRR test a small sample of the test fuel is placed in a temperature controlled bath, submerging the contact between a steel ball and flat steel disc. The temperature is set to 60°C and the humidity is controlled and noted. The ball is then lightly loaded with two Newton and moved back and forward (reciprocated) over the disc at a set stroke and frequency. The friction coefficient, fuel temperature and electrical contact resistance are monitored throughout the test.

After 75 minutes, the wear scar diameter on the ball is measured in both parallel and perpendicular to the sliding direction and the mean wear scar is taken.