Improving the green credentials and value of hydrogenated vegetable oils 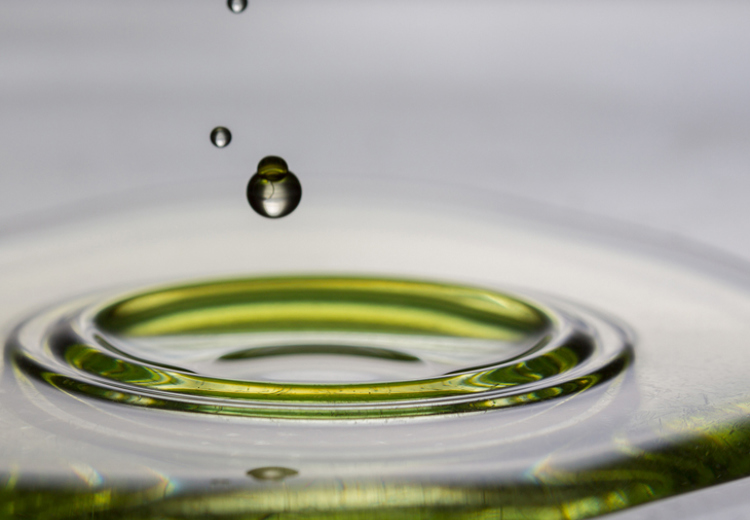 As governments and regulatory agencies work to meet their Paris Agreement commitments, tighter regulations to reduce greenhouse gas emissions from the transport sector are being introduced. These activities are driving up the use of more sustainable fuels, such as hydrogenated vegetable oils (HVOs), as an alternative to fossil-based fuels. Infineum fuels specialists, Dhanesh Goberdhan and Robin Hunt, explore how the use of tailored cold flow additive technology can help to enhance the opportunities and value available to HVO producers and users.

A significant amount of effort is required to meet the Paris Agreement target of limiting average warming to well below 2oC above pre-industrial levels and to pursue efforts to limit the temperature increase to 1.5oC. In line with their commitments to the Agreement, governments and regulatory agencies the world over are introducing measures to reduce greenhouse gas emissions. In the transport sector, policies (such as the Renewable Energy Directive (RED II)), support the use of fuels from renewable sources - although the type of feedstock used in the production of these fuels is now an increasingly regulated factor.

Produced from sustainable raw materials, such as rapeseed, palm and soya oil, or even waste and residual fat, hydrogenated vegetable oils (HVOs) are paraffinic renewable diesel fuels that are both fossil and fatty acid methyl ester (FAME) free. In addition to their green credentials, HVOs have better cetane number than fossil fuel derived diesel and superior oxidative stability properties vs. FAME. These advantages mean their use as both a biofuel and biofuel component is growing.

Both HVO and diesel fuels derived from fossil fuels contain n-alkanes. In fossil-based fuels at low temperatures these precipitate as thin rhombohedral plates, which can block fuel filters designed to protect diesel injectors and pumps. This can result in fuel starvation to the engine, leading to a loss of power and/or stalling, and even potential failure of the engine to start. In contrast, the wax that precipitates from HVO shows uncontrolled crystal growth, with larger amounts of random shaped crystals, which can also cause significant issues in terms of blocking fuel filters. In the cases shown in the photomicrographs below, the slower wax crystal growth seen in the fossil-based fuel gives rise to flat planar crystals while, for the HVO, the rapid speed, uncontrolled precipitation does not allow these plate-like crystals to form.

If wax precipitates at too high a temperature, the low temperature properties of hydrocarbon fuels such as diesel, FAME and HVOs can be negatively impacted. The degree of the impact is governed by the distribution of the long-chain n-alkanes within the fuel. The high molecular weight n-alkanes become supersaturated during cooling, which results in their precipitation. These straight chain alkanes form waxes that crystallise out of solution, which may cause filter blocking issues.

However, the production of HVO, from various feedstock oils via catalytic hydrotreating and isomerism means that not all HVOs are the same. Their final composition is highly dependent on the feedstock oils and level of isomerisation, which also impact the characteristics (e.g. cloud point) of the final fuel. This means that there is a need for additive solutions to be carefully tailored to the feedstock and process configuration.

Gas chromatography analysis reveals that finished HVOs can have very different ratios of C16 and C18 n-alkanes depending on the distribution of fatty acids in the original oil. However, this appears to have very little effect on the finished fuel characteristics. It therefore seems likely that the cloud point result is mostly influenced by the total level of n-alkanes rather than their distribution.

As HVOs are more widely used as an alternative to diesel fuel, Infineum has invested in R&D to understand their low temperature properties and in the development of products for their optimisation.

In HVO production, the level of isomerisation can be adjusted to give the required low temperature properties in the final HVO product. However, HVO manufacturing units may be set up to produce one level of isomerisation, which means this solution could lack flexibility when supplying markets with a range of different low temperature requirements. In addition, isomerism is an energy intensive process and as organisations look to meet net-zero emissions targets they will look for other options - such as additive treatment - to optimise their production.

Another option that can be used to overcome low temperature issues, and as an alternative way of deploying HVOs, is to use HVO as a blend component. That is, to produce a BX fuel by blending an appropriate middle distillate and an appropriate level of HVO to produce a fuel of the required low temperature properties. However, the properties of distillate fuels can also be highly variable, which means it is not always possible to both predict and obtain the desired cold flow properties by simply blending the two together. This is even more of an issue when producing a co-processed HVO, where issues may arise in being able to tailor production to specific cold flow properties consistently.

Infineum has identified cold flow additive solutions that specifically address these HVO challenges over a wide range of processing conditions and configuration types.

Whilst isomerisation can reduce low temperature issues by reducing the amount of n-alkane wax, the use of cold flow additives may offer more value to refiners.

Tailored cold flow additives enable the use of a less isomerised HVO and can help refiners to achieve more than a 5oC improvement in cold filter plugging point (CFPP) performance. In a pure HVO, because the fuel is highly paraffinic and the level of wax precipitation is high, the fuels will be difficult to treat. However, additive treatability improves as the levels of isomerisation increase.

Although the source of the feedstock has little effect on base fuel characteristics, it can have an impact on the fuel’s response to additives. This means HVOs produced with different feedstocks may have different additive needs, and require tailored solutions.

Clearly, the same additive technology can give different levels of additive response in HVOs with similar cloud points and untreated CFPP results. In the case above, the HVO feedstock seems to have a significant impact on the additive response of the finished fuel.

HVO as a bio-blend component

The use of HVOs as a bio-blend component is an accepted route to improve the sustainability credits of fossil diesel. This can be achieved by blending HVO with distillate diesel or by co-processing the base oil with diesel in the refinery prior to hydrotreating.

A number of factors influence the finished fuel characteristics including:

This means that blending HVO into diesel fuel can result in a finished blend with a range of low temperature properties. Infineum understands the variability in additive response and has developed tailored products to meet the requirements of various feedstocks, blend ratios and process configurations.

Additive selection for blended and co-processed HVOs is highly dependent on the overall n-alkane content of the finished fuel.

If, for example, the original diesel has a high n-alkane content this can act as a limiting factor when deciding how much and which kind of HVO can be added into a blend. 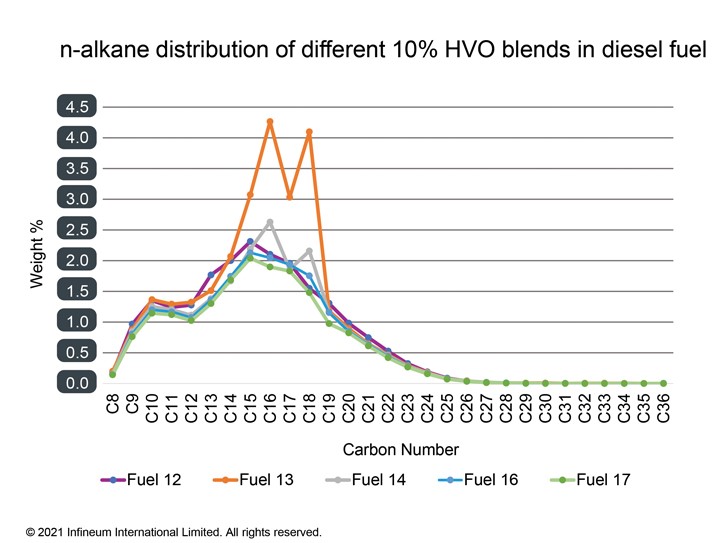 The addition of different HVOs with different cloud points, blended at 10% into diesel impacts the n-alkane distribution

Increasing the levels of HVO isomerisation is clearly one route to improve CFPP response within a blend, but the CFPP of low level isomerised HVO can also be improved by the use of specialist additives.

Different additive technologies provide various levels of performance depending on the levels of n-alkanes in the final fuel blend. Our studies have shown that as the level of isomerisation and hence n-alkane levels from the HVO increase, the more advanced chemistries developed by Infineum are needed to achieve an adequate level of cold flow performance. 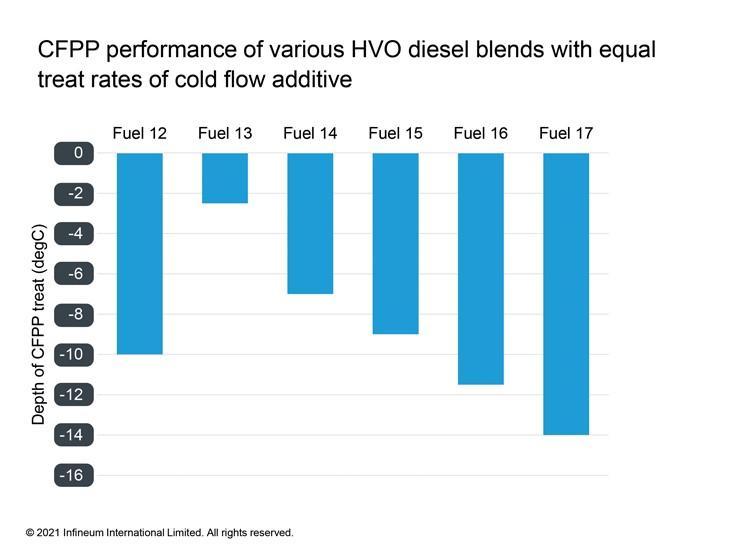 Clearly, dependant on the HVO characteristics, the choice of cold flow additive is crucial in achieving optimum low temperature performance.

The green credentials of HVOs have resulted in a growing market for these products as both a biofuel and biofuel component. A key priority is to ensure the HVO produced has the optimum low temperature performance, which is governed by the balance of iso and n-alkanes present, which in turn is influenced by the HVO feedstock and the level of isomerisation in production.

Infineum has identified a number of different methodologies that can improve low temperature properties of HVOs and HVO containing distillate fuels.

The appropriate use of advanced cold flow additive technology is one option that can help to ensure HVOs meet low temperature requirements while also delivering a number of additional benefits.

Infineum has designed additives specifically tailored to improve the cold flow of HVO. The careful integration of these cold flow additives into the HVO production or blending processes has been shown to provide both producers and end users with additional opportunities to optimise the value of their operations.