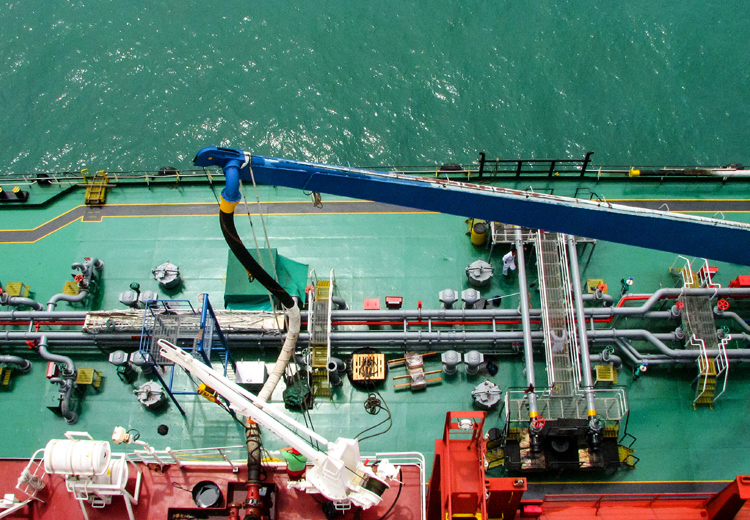 While the implementation of the IMO 2020 sulphur cuts has gone relatively smoothly, fuels with sediment levels above the specification limit have been reported. These off-specification fuels can form sludge in tanks, which can readily choke purifiers, filters, fuel injection equipment and even fuel lines themselves. Rob Ashton, Infineum Marine Fuel Additive Business Development Manager, and Steve Benwell, Global Fuels Key Accounts Manager, look at how fuels on board ship may deteriorate over time and show how certain testing protocols may give ship operators misleading information about fuel stability.

The key concerns leading up to the implementation of the IMO 2020 sulphur reduction were the stability and onward compatibility of very low sulphur fuel oils (VLSFO). After an initial influx of off-specification fuels in the fourth quarter of 2019 and the subsequent effects on refining output caused by the global pandemic, ship operators were rightly concerned. However, during the second and third quarters of 2020, the sedimentation levels in VLSFO appear to have stabilised at point of sale. The vast majority of fuels across all regions recorded a potential total sediment (TSP) of between 0.01 mass % and 0.03 mass %, which is well within the ISO 8217:2017 edition fuel standard for marine fuels specification for aged total sediment of <0.1 mass %.

While, on the surface things may appear to be well under control, ship operators are still reporting stability issues associated with VLSFO, with the real problem being related to the shelf life of the fuel. A previous Insight article has reported on the importance of evaluating fuel stability over time and how Infineum has developed an extended TSP protocol to simulate the storage conditions on board ship over an extended period of time.

This article will look at extended fuel life studies using the total sediment tests and at the Separability Number test (ASTM D7061), which is also sometimes used by some service providers. The latter widely available test, also referred to as the Turbiscan®, measures the Reserve Stability Number (RSN) by adding a fixed volume of heptane to a toluene-diluted fuel oil sample. The measurement is obtained by scanning the sample with a near infra-red source to determine the destabilisation of the solvent-diluted fuel oil sample over a 15 minute period. The test sample is then rated as shown in the table.

This test features in the 2019 CIMAC guidelines on marine fuel handling in connection to stability and compatibility. In this document, table 2 states that this test method is unsuitable to predict fuel oil compatibility.

As previously mentioned, during the first three quarters of 2020, VLSFO stability at point of sale has largely been on specification, with reported TSP of between 0.01 and 0.03 mass %. Despite this comforting statistic, stability remains one of the key areas of concern for VLSFO use. This is mainly due to the uncertainty around the shelf life of the fuel, which can be less than three months. Looking in more detail at a marine fuel sedimentation dataset from January to September 2020, relatively few off-specification samples (1.4%) from a TSP perspective have been recorded. However, the RSN data would indicate that a significant proportion (8.1%) of these fuels have low stability reserve (i.e. high RSN >10) and ideally their use should be avoided. 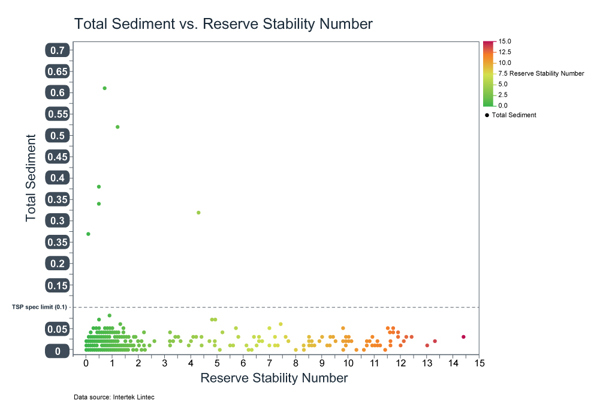 What is particularly interesting about this dataset is that the vast majority of fuels with questionable stability reserve are 3.5% sulphur heavy fuel oils, which traditionally do not experience sedimentation issues due to their predominantly polar/aromatic nature.

Drilling down into the data to look at VLSFOs specifically, the majority of fuels sit in the stable zone for TSP and RSN, however: 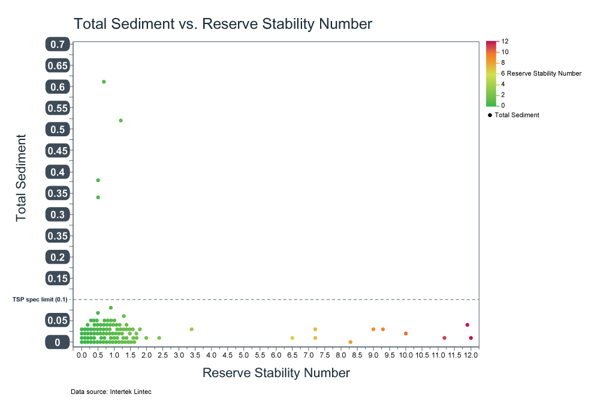 This information clearly shows that there is no correlation between TSP and RSN and hence extra care should be taken when using RSN as an indicator of VLSFO stability.

Having established that there is no correlation between TSP and RSN, it was important to assess whether longer term fuel aging would change this conclusion. Two VLSFO blends were selected for the extended fuel life study based on the fact that they were both borderline from a total sediment perspective i.e. they were close to the maximum specification of 0.1 mass %. Both fuels were stored over time at 40°C and tested for potential total sedimentation (TSP) and RSN over a four-week period. The results are charted below: 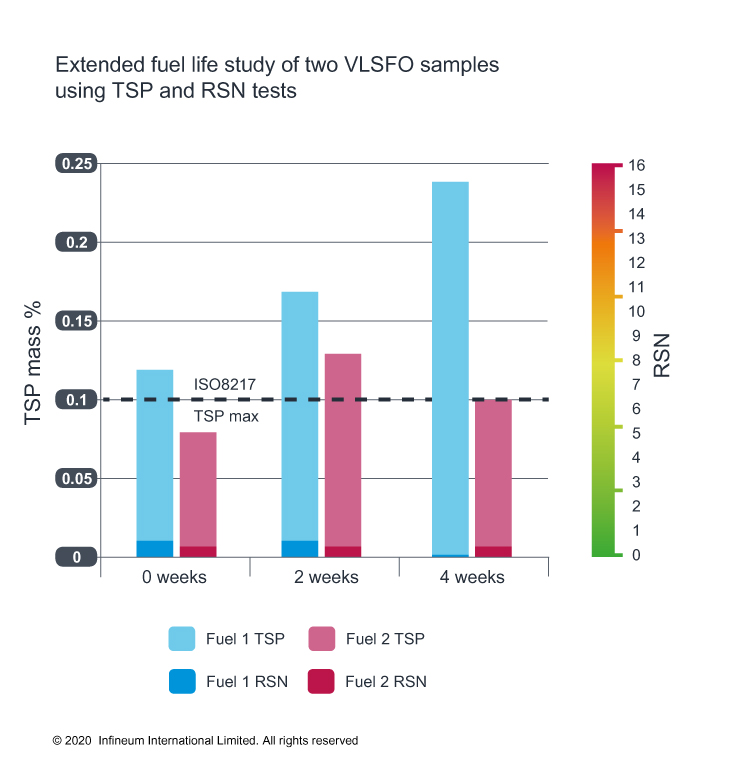 In Fuel 1, which was marginally off specification for Total Sediments at the start of the test, the TSP deteriorated significantly over the four-week period to a point where a ship operator would be very unlikely to use the fuel. However, the RSN measured by the Reserve Stability Number test determined that the fuel was in the extremely stable zone at the start of the test. Over the four-week aging period it did not show any level of deterioration, if anything, it appears to have improved!

In Fuel 2, which was marginally on specification for Total Sediments at the start of the test, the TSP deteriorated to a lesser extent than Fuel 1 over the four-week period, but was marginally off specification at the end of the test. Once again, the Reserve Stability Number test determined that the fuel was in the extremely stable zone at the start of the test and it did not deteriorate over the four-week period.

Overall, it was determined that while a deterioration in TSP was seen, there was no significant change in RSN i.e. the degradation of the fuel was not detected by the Reserve Stability Number test.

This merely goes to reinforce the CIMAC position that this test cannot be used to predict fuel stability or compatibility.

It is postulated that the issue lies with the fuel oil dilution process in the Reserve Stability Number test procedure, where the test fuel oil is initially dissolved with toluene and subsequently treated with heptane. Toluene is an aromatic solvent which is ideal for maintaining asphaltenic species in solution, whereas heptane is aliphatic/paraffinic and is not. By diluting the test fuel oil in toluene (a residual fuel mimic), the natural asphaltene solvency effect of the test fuel itself is overwhelmed by the toluene. When the heptane (a distillate fuel mimic) is added to the diluted test fuel oil, the asphaltenes are destabilised essentially from the toluene with only a very minor contribution from the fuel oil i.e. the natural contribution of the fuel oil solvency is not tested. It is proposed that the toluene/heptane ratios used in the test are too high (up to 40:1) to provide a realistic assessment of a fuels ability to maintain asphaltenes in solution over any time period.

The issue of VLSFO stability is clearly still a cause of concern for ship operators.

To ensure fuels do not cause serious operational issues it is essential to fully understand the TSP level of the fuel throughout its lifetime on board.

Our assessments, over an extended period of time, confirm the concerns held by CIMAC that the Reserve Stability Number test is unable to accurately predict the compatibility and stability of marine fuels. This leads us to conclude that operators must take extra care if RSN data is used as an indicator of VLSFO stability.

The next Marine Fuels Insight article will focus on the ways in which additives can be used to provide added security with regard to long term fuel stability.