The outlook for the refining industry in a post COVID world 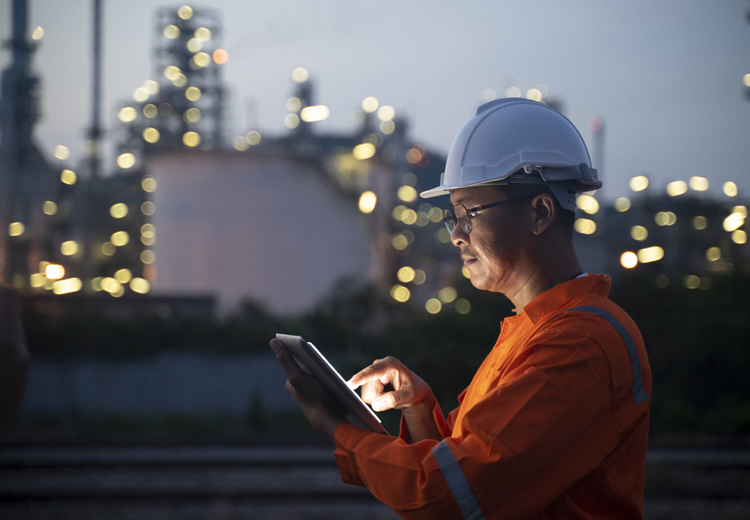 2020 was one of the most turbulent on record for the oil industry. The measures undertaken to contain the coronavirus disease triggered a sharp decline in vehicle use, grounded civil aviation, and reduced construction and manufacturing activity. As a result oil demand plummeted and, although refineries took drastic action, some have not survived. Daniel Evans, Vice President, Global Head of Refining and Marketing at IHS Markit, talks to Insight about what he sees ahead for the industry.

The lockdown measures, imposed to slow the spread of the COVID-19 virus, restricted most forms of travel and as a result global oil demand nosedived. The refining industry responded quickly by temporarily taking capacity offline and slashing utilisation rates. While some plants may never fully recover from the impact, signs of hope are emerging. As the vaccine rolls out and restrictions on travel ease, demand for some oil products is increasing, although growth in international air travel is still very cautious as new variants of the disease emerge. With a tentative recovery underway, Daniel Evans, Vice President, Global Head of Refining and Marketing from international research and analysis provider, IHS Markit, gives his thoughts on the aftermath and the future picture for refiners.

As the pandemic spread, global oil demand fell 22 MMb/d almost overnight and in response the industry quickly reduced capacity. As Daniel explains, despite the easing of restrictions, closures look set to continue, with some likely to be permanent.

“Since April 2020, 3.1 million barrels per day (MMb/d) has been slated for closure or highlighted as being at risk of closure by asset owners. We now expect at least 4.5 MMb/d to close by the end of 2025.”

Even though utilisation fell below 80%, new capacity was still being brought online through projects that were well advanced before the pandemic struck, making them difficult to delay, defer or cancel. “We expect almost 6 MMb/d of additional refining capacity to be brought online by 2025, which will worsen the refining sector oversupply arising from the weaker demand outlook.” 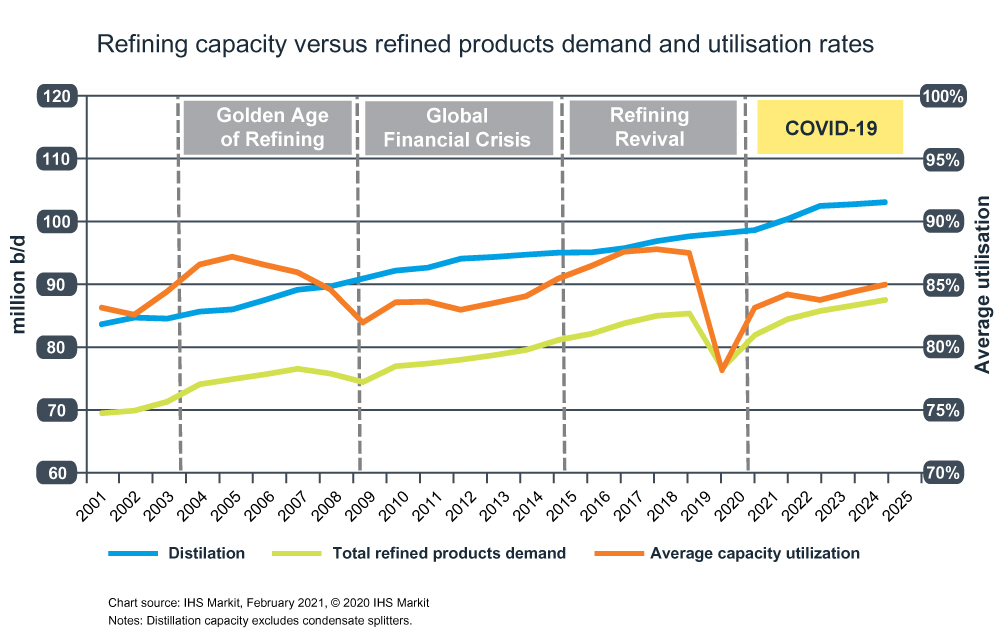 However, as Daniel continues, beyond this timeframe demand trends will significantly influence future investments. “In my view, a much more bearish demand outlook makes building the case for a multi-billion dollar greenfield investment much more challenging. The refinery of the future will need to be both greener and more integrated with chemicals. With regards to the former we are seeing refiners invest in three areas as they seek to transition their assets from fossil-fuel-machines to low carbon fuel manufacturing hubs. The first is deeper bio-integration, including bio-conversions. The second is investment in electrolysis, which will reduce the carbon intensity of the hydrogen used by refiners and potentially create a building block for less carbon intensive fuels. The third is carbon capture, utilisation and storage (CCUS). Some refiners are seeking to tie their assets into CCUS systems. With regards to petrochemical integration, we are seeing some refiners shift operations to increase the output of petrochemical feedstock and product, whilst others are investing into base and speciality chemical production.”

Daniel suggests that global consumption of oil is unlikely to reach pre-COVID levels until 2023, with some regions never fully recovering, and shifts in production are anticipated.

“From a geographical perspective, we expect the Middle East to grow its share of crude production from 31% in 2020 to 43% in 2050. All other regions will see their shares contract by 1 to 3%, with the exception of Latin America where the share will grow from 10% to 13%.”

However, as he goes on to explain, it is not only production volumes that will change but also the quality of crude oil produced. “We see a big shift from light to medium grades. Light crude’s share of the market will fall from 60% to 48% between 2020 and 2050. Most of this share will be gained by medium sour grades, which will represent more than a quarter of crude produced in 2050 (versus 16% today). As a result, refinery processes will need to become more severe and more hydrogen-thirsty, which will fuel investment in electrolysis.”

As regional demand and production patterns shift, so import and export movements of finished products will change. “Here we can see two key flows,” Daniel confirms. “First, naphtha into China and second transport fuels out from China. We expect Chinese imports of naphtha to increase considerably in both the short and longer terms to meet increasing petrochemical feedstock demand, with most regions exporting to China. In addition, length in China’s transport fuels looks set to grow, and Chinese exports into and beyond Asia are likely to increase.”

The picture is also changing in India, where demand will continue to grow strongly following the pandemic. “Indian demand is projected to increase to almost 8 MMb/d by 2050. As a result, most refined product produced in India will be consumed locally. However, that said, we do expect India to be a net exporter of both gasoline and middle distillates, with East Africa, Europe and other Asian markets all being potential destinations.”

Although many uncertainties remain, as business activity and travel pick up, global demand for refined products is beginning to recover. However, the industry is under increased pressure to decarbonise, which adds further uncertainty, something that Daniel says is likely to influence the future refined barrel split and long-term demand. “By 2024, we expect 31% of global oil demand to be gasoline, 9% jet, 32% gasoil, 7% residual fuel oil, 9% naphtha and the remainder to be other products. We see an acceleration of the energy transition being an important legacy of the COVID-19 pandemic. As a result, demand for transport fuels will face increasingly strong headwinds."

"Our long-term demand forecast is now around 8 MMb/d lower than our pre-COVID forecast.”

The rate of plug-in electric vehicle penetration into the passenger car market is one factor Daniel suggests will have an impact on these future demand projections. “E-day is coming! By 2026, it’s likely the costs to build a battery electric vehicle (BEV) will reach parity with those of a conventional car. In our base case we forecast that by 2050 less than half of the global fleet will be conventional gasoline or diesel cars. However, almost two-thirds of miles driven will still be oil-powered due to the role of mild and plug-in hybrids. For example, in emerging markets, where the infrastructure to charge BEVs may be lacking, hybrids could play a big role for some time to come.”

This continued use of the internal combustion engine in the vehicle parc means in the near-term demand from the transportation sector should grow. “We expect oil demand and demand for refined products in the transportation sector to rebound beyond 2019 levels and grow into the 2030s. Total liquids demand is likely to peak in 2036 and fossil fuel demand to peak in 2032, due primarily to increased penetration of biofuels. Although, as I’ve already said, we have revised 2050 demand projections down versus our pre-COVID view, with an accelerating energy transition the main reason for this change.”

Increasing use of biofuels

Beyond electrification, the transportation industry is also increasing its use of biofuels. In Europe this has been in response to the introduction of the Renewable Energy Directive (RED) that sets a renewable energy share target for road and rail transport. Progress to the 2020 target has been good, with the region only slightly behind the 10% target. However, RED II has now been issued with a new target of 14% in 2030 that will be more challenging for refiners to meet. And, as Daniel continues, compliance is likely to vary significantly from country to country. “Some countries will go beyond RED II targets. This is already being reflected in national level policy in Scandinavia and the Iberian Peninsula. Other countries will fall short. Renewable electricity, the electrification of the vehicle fleet and increased penetration of biofuels in the on-road and aviation sectors will all contribute towards moving towards RED II targets.”

One key challenge here is that the 7% blending limit of FAME with diesel means it cannot provide the required 14% bioenergy share. As Daniel explains, this has led to a growing interest in hydrogenated vegetable oil (HVO) in the European and global markets.

"We expect over half of this capacity will be greenfield with the remainder being co-processing and bio-conversions. In the period to 2025, sufficient low carbon intensity feedstock should be available but, in the longer run, the availability of these feedstocks will be a challenge. Our expectation is that sustainable aviation fuel mandates will contribute to increased demand for HVO and the need for further investment. From a feedstock perspective, we can see challenges in further scaling the used cooking oil market and as a result other low carbon intensity feedstocks may be pulled into HVO production.”

In the US, the Renewable Fuel Standard 2 sets annual volumes of biodiesel blends. Currently five plants produce some 400 million gallons of renewable diesel per year and capacity looks likely to increase in the next few years with expansions, conversions and new builds. “As climate change policy advances, refiners might see increasing incentives to use HVO as a blend stock in diesel,” he suggests. “This could occur either through more stringent national renewable fuel standards or as more regions adopt low carbon fuel standards similar to those in place in California and Oregon. As an example, California suppliers have increased the HVO content in diesel to over 15 volume percent in 3Q2020 versus less than 5 volume percent in 2015 to comply with the state’s increasingly stringent gasoline and diesel carbon intensity targets. In addition,” he continues, “HVO can have excellent cold flow properties which we expect to remain an important consideration for fuel performance in this market and US refiners will likely need to continue monitoring the cold flow performance of the diesel fuel they supply to the market. Here, climate policy and the diesel blending strategies that result could make meeting market needs easier over time.”

In Infineum’s view, the selection of an appropriate HVO cloud point and blending share along with the use of specialised cold flow additives, designed to treat narrow fuels, are key to the cost effective achievement of targets while ensuring trouble-free operation.

In summary, whilst things may look pretty bleak for the refining industry over the next five years – with significant restructuring required to return profitability to the industry – Daniel expects the industry to become increasingly dynamic. “We expect activity to hot up in the refining space. We won’t just see asset closures, but also transactions and investments as refiners revisit their refining strategies.” Daniel concludes, that the lessons from 2020 and an increased focus on decarbonisation and Environmental, Social and Governance (ESG) are likely to influence future refinery strategies and portfolio decisions. “Refiners are facing two main challenges. Firstly, they need to adapt to a changing market, one where fuel demand growth is slowing and yet chemical demand continues to grow. Secondly, they are facing increasing pressure to reduce the emissions footprint of their assets and the fuels they produce."

"To attack these challenges we expect to see deeper integration into growing petrochemical markets and adoption of lower carbon intensity strategies to become the norm."

"In Europe and North America, we see that investments in biofuels or hydrogen are helping some refineries reposition for the longer term, with several facilities that have announced permanent shuttering of crude oil processing converting to renewable diesel production. Meanwhile in Asia, refiners are exploring options for better integration with petrochemical facilities. One thing seems clear to me, growth-focused fuels-only refining investments and strategies are a thing of the past.”