Exploring the changing base stocks market in the age of sustainability 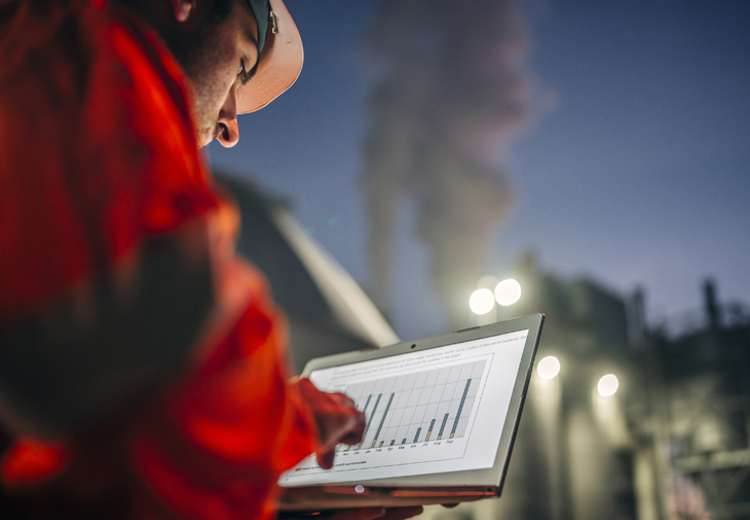 For quite some time, the global market for base stocks has been shaped by supply and demand, with performance driving the need for a particular base stock for a specific application. Developments over the past two years, however, have altered the industry in fundamental ways.  Anuj Kumar and Sharbel Luzuriaga from Kline share their thoughts on the changing market and the new emerging factors that will play a key role in how the base stocks industry evolves over the decades to come.

The past decade was marked by rapid expansion in base stock capacity, with the pace of retiring inefficient plants relatively slower. Almost all the capacity shutdowns were for Group I base stocks, due to the decline in acceptance and suitability of these products for automotive engine oils, along with the growing competition from high-performance base stocks such as Group II and III. At the same time, the global demand for base stocks has begun to plateau, with several regions in the world experiencing declines.

The COVID-19 pandemic severely impacted the market during the first half of 2020; by the second half of the year, demand for global finished lubricants began to recover. In some markets, demand rebounded to almost pre-pandemic levels on a month-over-month basis. Nonetheless, the global market experienced a significant drop in demand due to the lockdown months in 2020. 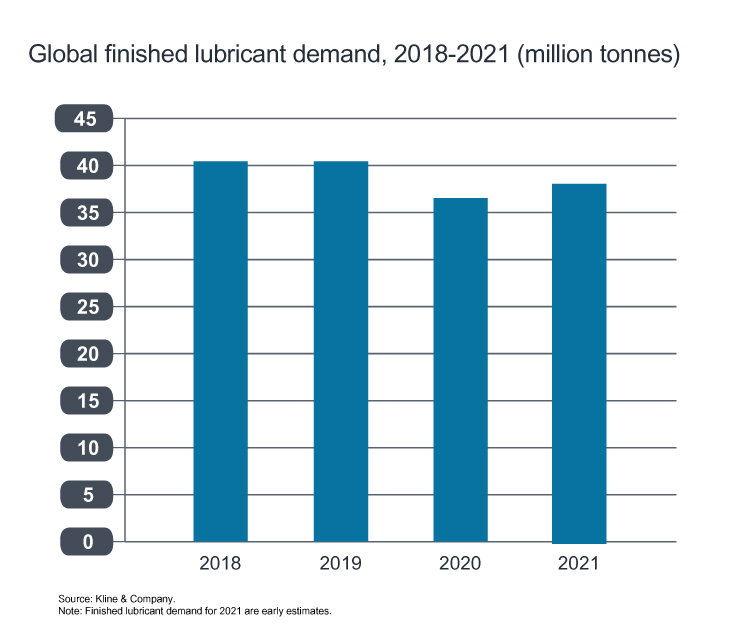 While the demand for finished lubricants approached traditional levels during the second half of the year, the market faced a base stock supply shock. With the demand for fuels failing to keep pace, refiners across the world were forced to operate their fuel units at a lower rate. This resulted in a reduced supply of feedstock for base stock production, as feedstock production is tied to fuel production. This issue was more pronounced among low-complexity refineries, particularly those producing Group I base stocks, as they had reduced flexibility in reacting to the situation.

Demand for transport fuel has inched closer to pre-pandemic levels, but this has not been the case for aviation jet fuel, which has continued to languish due to the ongoing negative effect of COVID-19 on the airline industry.

This trend has impacted the availability of feedstock for base stock production, with prices remaining at higher levels even as demand has continued to recover. Demand for jet fuel witnessed some recovery by the end of 2021; however, demand did not return to pre-pandemic levels, thereby constraining base stock supply. 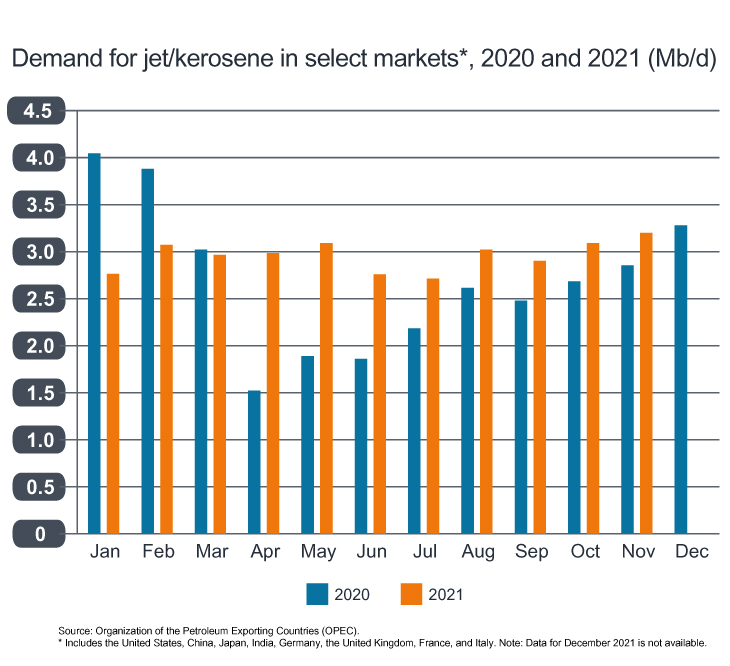 The present environment in terms of base stock supply is interesting, with the global market facing supply constraints despite having much higher capacity than demand. The current operational issues faced by base stock plants are due to factors beyond the lubricants/base stocks market purview. Further recovery of utilisation rates among base stock plants will be contingent on how quickly demand for other fuel products recovers, especially jet fuel.

Recently, air travel has increased considerably, hinting that a recovery in demand for jet fuel may be around the corner.

The crisis faced by the global market due to the COVID-19 pandemic resulted in changes in the way base stock buyers evaluated their sourcing options. The vulnerability of the global supply chain was exposed, as blenders across the world were not able to secure base stock supplies to meet their requirements. What resulted was a period of panic buying, with blenders snapping up whatever they could get. This has also shifted the preference among blenders to source from sellers with a more resilient supply.

While blenders continue to source from global markets, there is a growing trend toward exploring supply options that are closer to home.

The global base stock market was consolidating even prior to COVID-19, gradually transitioning from a model where an in-house supply of base stocks was key to one where merchant marketers have gained prominence. Small and marginal base stock players have been exiting the market, while a few mega suppliers that have a global presence have increased their prominence. These mega suppliers have a much wider geographical spread of their production bases and multiple stock points, which addresses blenders’ emerging need to have a supplier closer to their operations. At Kline we anticipate that this trend will gain traction in the future and that merchant marketers will assume greater significance in the base stock supply chain.

While Kline suggests the outlook for global finished lubricant demand appears bleak, base stock capacity expansion continues unabated. A lot of new base stock capacity is either under way or in the planning stages. Much of this capacity growth is being considered in China and India, with both nations being major importers of Group II and III base stocks. Establishing these capacities is aimed at reducing the import dependence of the respective countries.

Elsewhere, new virgin base stock capacities are being planned in the Southeast Asian markets (Shell and ExxonMobil in Singapore), South America (Petrobras in Brazil) and Europe (refiners in Russia and the CIS region). In a market environment where the outlook for finished lubricant demand is flat, at the best, and likely negative, the new capacity additions will increase competition in the base stock supply market. This may serve as a catalyst for the closure of not only the inefficient base stock plants, but a few others as well.

Sustainability — the next megatrend

Sustainability is expected to be one of the key megatrends that will shape the future of not only the lubricants industry, but the entire industrial segment. The challenge of climate change has drawn worldwide attention among policy makers and various companies, who are now working to reduce the total carbon footprint and eventually to become carbon-neutral or carbon-negative. While efforts are in the very early stages, and while there are multiple routes that companies can adopt in their endeavor to reduce their carbon footprint, the entire concept is gaining traction, with companies making significant commitments toward this goal.

Kline expects this could impact the base stock industry in a number of ways:

It is generally believed that the growing penetration of EVs will result in a decline in demand for base stocks. Further, with Group III being the primary base stock used in passenger-car motor oils (PCMOs), demand for Group III base stocks will also decline. However, Kline’s analysis reveals that Group III demand will be much more resilient, with the outlook being contingent on several factors:

Therefore, while the overall demand for base stocks from the PCMO segment will decline, Group III base stocks will be supported by the rapid transition toward SAE 0W grades, which use Group III and PAO base stocks.

The current stage of lubricant-formulation development is undergoing a technological shift. PAOs are being replaced by Group III base stocks, particularly in those formulations that do not explicitly require the inclusion of PAOs to gain approval by the respective OEM. Lately, it has been observed that even the key PAO-based synthetic lubricant marketers have gradually transitioned to a Group III-led formulation approach, with PAOs being used in select grades only on an as-needed basis, to reduce costs. The primary reason behind this shift is the growing differential between Group III and PAO prices.

The supply of PAOs is considerably smaller than that of Group III/III+ base stocks, which may create availability concerns among lubricant blenders.

Nevertheless, PAO demand continues to grow, as this base stock has superior performance characteristics, especially in low-temperature environments. Further, growth in PAO demand is being supported by industrial applications where Group III presents limited challenges, as the latter is not available in higher viscosity ranges. The demand for PAO will be driven by the need to reduce emissions and improve fuel efficiency, OEM specifications, greater utilisation of lighter-viscosity engine oils, quality shifts in industrial applications, and sustainability.

Are we entering the golden age of bio-based base stocks?

Lower-viscosity PAOs are well-positioned to make robust strides in the new, sustainability-focused environment, notably because biodegradability increases with lower viscosities. Energy efficiency and low environmental impact are key attributes required in the formulations, not only of dedicated lubricating fluids in EVs, but in every single application aspiring to have carbon-reduction claims.

However, the environmental credentials of PAOs are largely distorted, as these base stocks are regarded as a synthetic mineral hydrocarbon. Conversely, bio-based synthetic hydrocarbons and long-chain esters known as estolides are high-performance base stocks derived from renewable sources, such as vegetable and plant oils, offering similar performance to that of Group III/III+ and PAOs. Consequently, they can be used as drop-in replacements for synthetic mineral-based base stocks. The primary products available in this category in the market include SynNova Sustainable Synthetic Base Oil (SSBO) by Novvi, and Estolides by Biosynthetic Technologies.

Major oil companies have also ventured into the bio-based base stocks market. This includes the recently signed joint-development agreement between ExxonMobil and Bio Accelergy Ventures and Chevron’s plans to increase the supply of bio-sourced base stocks through its acquisition of Nexbase from Neste, with Chevron also being an equity partner in Novvi. Companies have also engaged in carbon-credit transactions, with the goal of offering carbon-neutral base stocks (Shell, and Nexolube with Cepsa).

Bio-based base stock technologies are poised to reconcile all key considerations for sustainable products, from economic, environmental, and social perspectives. However, scalability, higher prices, and OEM certifications pose major challenges for some manufacturers along the road to full commercial availability of bio-based base stocks in lubricant applications.

The global base stocks market is undergoing fundamental changes that will have long-lasting impacts. The growing focus on sustainability and energy transition will have an inevitable effect on the demand for base stocks, as well as the supply. At Kline we expect the role of smaller and marginal base stock players to be limited in the long run, with inefficient plants continuing to close. Going forward, the focus will gradually shift toward base stocks that help meet sustainability goals, which will bring to the forefront base stocks that help improve energy efficiency, reduce emissions, and have a low carbon footprint in their value chain.

Base stocks All articles

The rise of re-refining

A question of base stocks