Meeting the complex lubrication requirements of OEMs and end users

As OEMs and motorbike users demand increased protection for their machines, Insight talks to François Dol, Automotive Product Director at Motul, about a wide range of topics including the increased need for dedicated oils and the likely impact of the JASO four-stroke specification revisions. 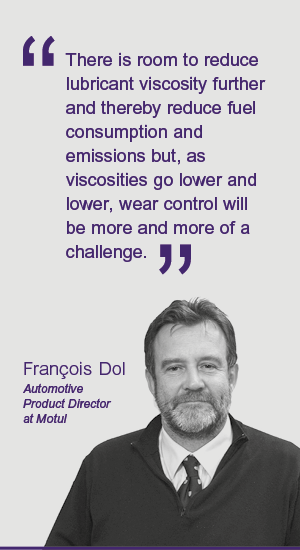 Unlike cars, most modern motorcycles use the same lubricant in the engine, gearbox and clutch. Passenger car motor oils, which are increasingly formulated to deliver fuel economy, are unable to deliver the required protection to all these areas.

Today’s motorcycle lubricants contain a balance of base oil and specific additives to optimise engine performance at high speeds, protect the moving parts of the gearbox and improve clutch response during gear shifting. It is important to develop next generation, high performance motorcycle lubricants that fulfil OEM recommendations and meet the most demanding of customer expectations.

With this in mind, we were keen to understand François Dol’s views on the benefits of dedicated motorcycle oils for today’s motorbikes. “Nowadays, bike OEMs consider the lubricant as an active part of the design process. Because three very distinct parts of the bike - the engine, gearbox and clutch - all need to be lubricated, formulating an oil for motorbikes is far more
complex than for passenger cars."

"The physical and chemical requirements set by OEMs vary significantly and are affected by parameters including the particular bike and its internal components, the type of usage, the fuel used and the targeted performance."

"I believe it is crucial for the rider to use the appropriate lubricant for his or her bike in order to get the most out of it.”

However, looking at the global market, we cannot lump users into one category. The way bikes are used from region to region is very different, the bikes themselves are not the same and the end user expectations are worlds apart. “In mature countries, like Europe, the US, Australia and Japan, you get two types of typical customers. First the aficionados - the passionate riders - these users look for pleasure, power and engine response. You also have commuters who typically live in crowded cities and use the bike to get from A to B quickly. However, these markets are pretty much established, and we are not seeing much growth, if any at all, in some countries.”

François sees quite a different picture in the developing countries. “If I think about India, Malaysia, Vietnam and Indonesia for example, the bikes and scooters are the first step into private motorised transport. The bikes have much smaller engine capacities and smaller lubricant volumes in the sump and are functioning under higher loads and stresses. In those cases, durability is the number one target, because minimising maintenance costs is crucial. In addition, I think the compatibility with the local, specific fuels will also become an issue to address.”

Although it is apparent that motorcyclists from around the globe have very different expectations of their bikes and of their lubricants, one aspect of performance – clutch feel - is of interest to everyone.

“The rider can really feel the clutch and it is important for us to achieve the right levels of friction so that the clutch does not feel too grippy or, at the other end of the spectrum, too slippery. But at the same time, we must ensure we meet customer expectations in terms of protecting their machine – specifically the engine, the clutch and the gearbox.”

Impacts of the JASO specification

Because industry passenger car lubricant specifications contain fuel economy requirements automotive oils are increasingly formulated with friction modifiers. Since many motorcycles have a wet-clutch system these oils can cause clutch slippage. In 1998, JASO established the JASO T903 standard for motorcycle oils in an attempt to overcome these issues. The standard, which sets minimum limits for key motorcycle lubricant parameters, was revised in 2004, 2006 & 2011. However, because JAMA is still concerned that market quality issues due to clutch slip may still arise, another update is expected by the end of April 2016.

“To address JAMA’s concerns, the biggest change in the 2016 version will be the introduction of new clutch friction materials and revised test limits,” François explains. “So far the data generated has shown good correlation with previous editions.”  There will be plenty of time for marketers to move to the new specification. “When the standard is introduced there will be an overlapping period when oil marketers will be allowed to file according to the 2011 or 2016 version, and the last date for on-file termination for the 2011 edition will be the end of April 2021. Some resource will be required to test and reapprove formulations over the next few years. However, when we think of our resources, we need to bear in mind that the JASO two-stroke standard is also under investigation as tests become unavailable and need to be replaced.”

Although JASO aims to include an additional gear pitting element into the standard, developing a cheap to run and reproducible test has proven to be a challenge.

As François confirms, it is likely that no gear pitting method will be included in the 2016 revision, but may be introduced at a later date. In the interim, there may be some uncertainty about how best to measure wear in motorcycle applications. “Real test data from field trials using production bikes are vital – as are data from dynamometer testing. However, formulators and engineers have also been using laboratory tests to successfully replicate real life conditions. The idea here is to be able to screen oils rapidly and in a cost-effective way. The FZG test for example, under modified conditions, can replicate some types of wear mechanisms experienced in bikes. Other tribological bench tests are available and under the right conditions, show good correlation with wear issues experienced in the field."

"I really expect the development of a standard gear pitting test to be the number one priority for the next JASO four stroke specification update.”

While the JASO specification revisions will provide oils that deliver adequate protection to today’s motorcycles, there is also a need to develop advanced products that deliver performance beyond this minimum quality level. Fuel economy improvement is one area where François believes lubricants can add value. “Lubricants can contribute a great deal to fuel economy - either via lower viscosity or by using surface active chemicals to reduce friction levels. But, if you lower the viscosity too drastically durability concerns, specifically for the gearbox, can arise. What’s more, if you use friction reducing chemicals, clutch compatibility can be an issue. So although the lubricant can clearly improve fuel efficiency we must not forget the global picture or lose sight of the lubricant’s purpose - there are always compromises that need to be made.”

Looking ahead, François sees a real challenge for motorcycle formulations. “Today, the lowest oil viscosity recommended by any OEM for a production bike is SAE 10W-30. There is still some room to reduce the viscosity even further and thereby reduce fuel consumption and emissions. As viscosities go lower and lower, wear control will be more and more of a challenge."

"In my view, the trend for lower viscosity makes it vital for a gear pitting test to be introduced that is relevant to the wear conditions experienced in a motorbike.”