The art of dispersant design 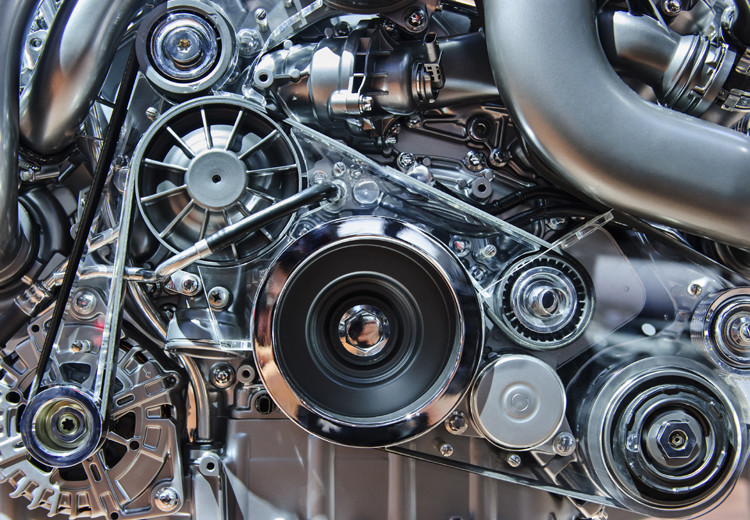 With dispersants comprising some 50% of crankcase lubricant additive packages, these important molecules must be carefully designed to deliver the functionality required in today’s fast changing market. Infineum’s Peter Wright talks about the development of dispersant chemistries that are optimised for crankcase applications.

Dispersants are the highest volume additive used in crankcase lubricants and, with treat rates in passenger car and heavy-duty diesel oils of between 2 and 10%, more than one million ktons of dispersant are produced per year to meet global demand in these applications. These important components are polymeric surfactant-like molecules, comprising at least one hydrophobic, oil soluble ‘tail’ segment, and at least one hydrophilic, polar ‘head’ segment capable of interacting with other polar entities in the oil.

Lubricant dispersants can be complex, comprising multiple tails, heads and bridges and their structure, which controls their properties, depends on the underlying chemistry.

The art of dispersant design involves a deep understanding of which architecture can best perform the functions required for the target application in the target environment, and developing chemistry that produces that architecture.

In today’s crankcase applications, lubricant dispersants carry out a number of vital functions including the control of sludge, varnish, deposits, wear and friction.

With high levels of industry effort focused on improving fuel economy, the use of low viscosity lubricants in crankcase applications is increasing. In this low-viscosity environment it is essential to control the build up of varnish and sludge to prevent the lubricant viscosity from increasing during its lifetime in the crankcase and to maintain the operational efficiency of the engine.

Dispersants control sludge and varnish build-up by preventing the formation of large aggregate structures that could eventually lead to gel formation, and by inhibiting their phase separation from the oil onto the engine surfaces.

The hydrophilic portion of the dispersant (head) interacts with the polar entities present in the oil, while the hydrophobic portion (tail) maintains solubility in the oil. This keeps the polar contaminants suspended in the oil.

Effective sludge dispersants generally comprise a significant concentration of aminic or alcoholic head groups to bind the polar entities in the oil. However, the dispersant also needs a highly soluble polymer chain, or a number of polymer chains of reasonable size, to maintain oil solubility while ‘carrying’ their load of polar materials. Too small a tail group could result in the dispersant being dragged out of solution by the polar materials present in the oil, thereby contributing to even more sludge and varnish. Often the best dispersants comprise both a high concentration of polar head groups to interact with sludge/varnish entities, as well as multiple high molecular weight polymer chains to maintain good solubility. Such dispersants may contribute significant viscosity to the oil..

In the hotter environments of diesel engines, deposit formation on the different parts of the engine caused by high temperature degradation of the oil can lead to engine failure. This could be reflected in ring sticking or an increase in blow-by. The dispersant must solubilise or wash away the polar entities formed before they coke or form deposits that adhere to the surfaces and interfere with engine function. It is critical that the hydrophobic to hydrophilic ratio of the dispersant is high enough to avoid the dispersant being pulled out of solution by the polar entities, since this would actually form deposits rather than preventing them.

In diesel engines, it is preferable to avoid the use of a large number of high molecular weight polymers since they can form coke forming carbon deposits in the engine. Instead, dispersants that are large enough to keep contaminants in solution but small enough to wash down the piston surfaces are selected.

The evolution of engine technology and engine operational parameters to reduce emissions means there has been a reduction in combustion temperature for a number of engines, especially for heavy-duty diesel applications. This has resulted in an increase in the soot content of the oil (up to 3-7% in some cases) due to incomplete combustion of the fuel. Soot particles in oil tend to aggregate into large, low-density agglomerates, which can result in a dramatic increase in lubricant viscosity and in some cases sufficiently large structures can be formed that may cause engine failure. 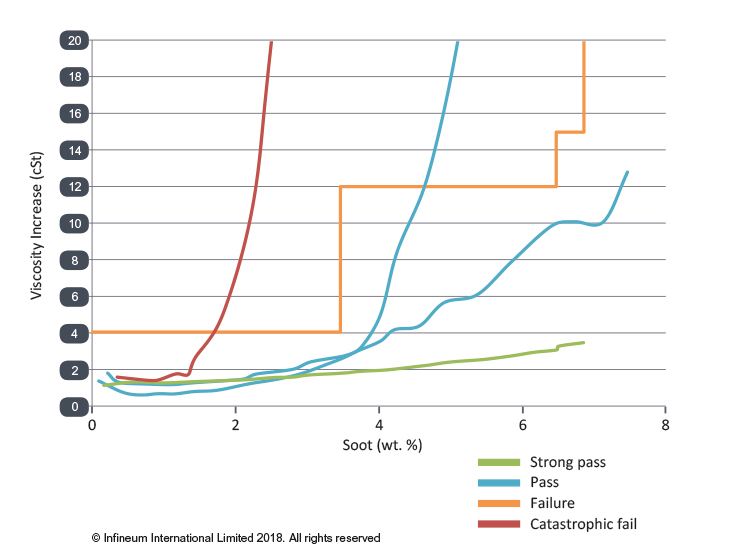 Dispersants are, therefore, needed to control the rheology of oils when soot levels exceed ~2-3%. The dispersant’s head group binds to the surface of the soot particles as they are introduced into the sump, while the long tails prevent the small soot particles from associating into large agglomerates.

The type of head groups required for sooted oil rheology control can be very different from that required for sludge and varnish control or deposit inhibition because the target interactions are different. The surface of a soot particle is highly aromatic so the dispersant head group can also contain aromatic groups capable of effectively binding to aromatic sites on soot. Because soot also has some polar functional sites on the surface, head groups capable of interacting with these sites might also be required. In order to effectively inhibit soot agglomeration, dispersants with multiple points of attachment to the soot surface are often needed to ensure that there is sufficient surface coverage to prevent agglomeration.

The design of dispersants for sludge/varnish control and high temperature deposit inhibition typically begins with selection of the polymeric tail, which is responsible for maintaining solubility in the oil. The most common polymer used is polyisobutylene (PIB), which is made via cationic polymerisation of a C4 refinery stream to produce a polymer tail with an olefin group at the end of the molecule. The olefin end group enables a polyamine or polyol head to be attached to produce a dispersant. To ease this process, the PIB is first attached to a connecting group, which is then reacted with the desired polar head group. There are two types of connecting chemistries used in the industry: maleation and phenol alkylation, which lead to succinimide and Mannich base dispersants, respectively.

However, these conventional succinimide and Mannich base dispersants, designed for sludge/varnish control and high temperature deposit inhibition are not as efficient at maintaining rheology control in highly sooted media. This is because the highly aromatic surface of a soot particle can sometimes require an aromatic dispersant for efficient binding and dispersancy. Exchanging the polyamine head group for an aromatic amine or aromatic ester while retaining the basic polymer structure and architecture, provides only small improvements. However, new dispersant architectures have been developed that provide very strong interaction with the soot surface.

Infineum has been involved throughout the evolution of dispersant design. 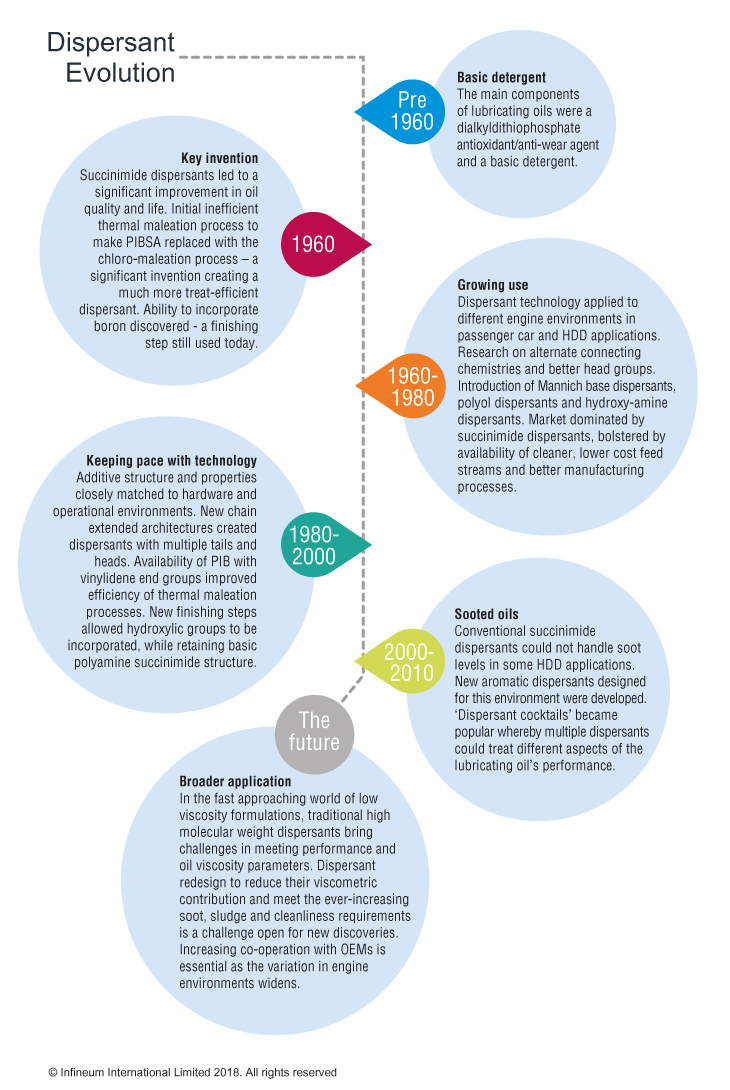 Dispersants are one of the most important tools for lubricant formulators. The key to future success in dispersant design lies in aligning the structure of the dispersant with its function and the mechanism through which it operates. At the same time it is essential to balance the conflicting needs for the range of formulation properties desired, which might include wear protection, friction control and engine cleanliness. Looking ahead, as soot environments change, new dispersant appetites may arise.

Infineum’s track record of innovation and healthy portfolio of components means it is well positioned to help build today’s complex lubricant systems while also anticipating the future requirements of customers and OEMs.