The latest updates on the ACEA Heavy-duty Oil Sequences 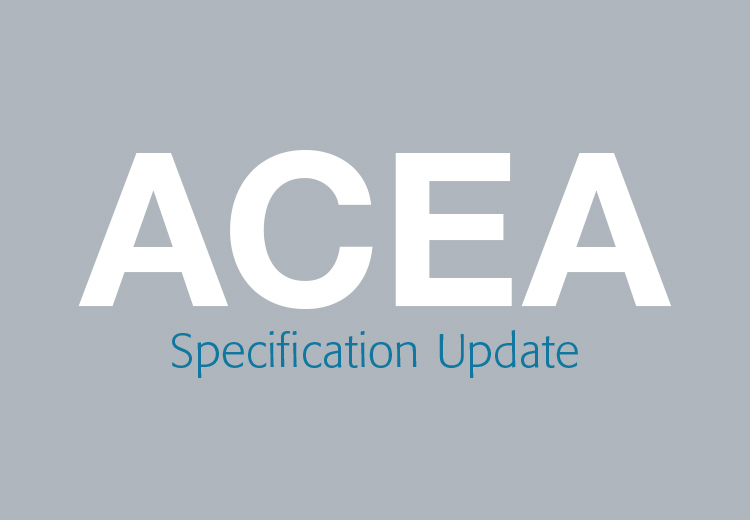 The release of the Light-Duty and Heavy-Duty ACEA Engine Oil Sequences are expected to be on different timescales, with ACEA Light-Duty Sequences expected very shortly. Uwe Zimmer, Infineum Industry Liaison Advisor, gives an update on progress and explores the challenges that remain in the developments on the heavy-duty side.

However, with the Light-Duty and Heavy-Duty ACEA Sequences expected to have different release timings, this article will focus on the progress of the Heavy-Duty Sequences.

Unlike the Light-Duty Sequences, which underwent three revisions, from first issue to the current version, to address test unavailability and define limits for successor tests, the ACEA 2016 Heavy-Duty (HD) Sequences remained unchanged.

However, the OM501LA (CEC L-101-08) piston cleanliness test is projected to come to the end of life in the near future. And this, along with the general need to make sure the sequences keep pace with hardware advancements and other changes, is one of the reasons driving the next ACEA HD sequence issue.

Broadly speaking, the ACEA categories E7 and E4 are being maintained at ACEA 2016 performance levels, while E6 and E9 are being upgraded to a different performance level. We will cover the details later, for now it is important to understand the intent of upgrading E6 and E9 only.

In order to differentiate on performance level, the category designations for E6 and E9 need to change: E8 superseding E6-16 and E11 superseding E9-16. Beside the E-categories there is also a desire to introduce new F-categories with lower viscosities (HTHS: 2.9 – 3.2 mPa.s) for improved fuel economy. Current thinking is to have two F-categories, F8 and F11, which are based on the corresponding E-categories E8 and E11, but with additional requirements. 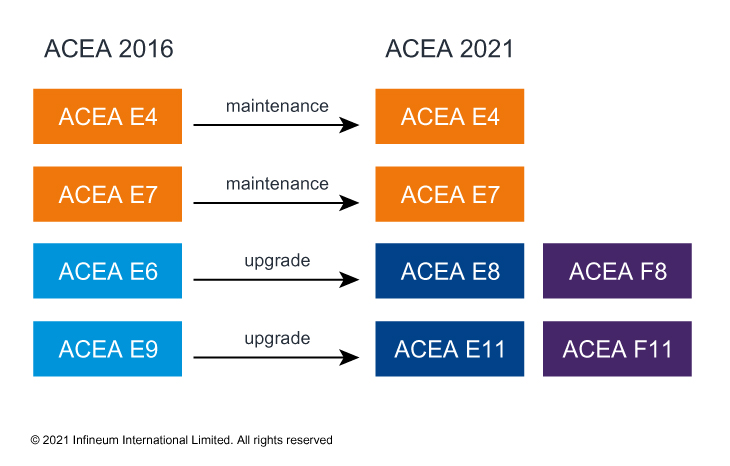 What is new in the ACEA 2021 E-categories

Bench tests - We will see some changes in the laboratory test requirements. The introduction of a rate & report requirement for Dynamic Viscosity at 100°C and shear rate of 106 s-1 (HTHS100) and chlorine levels is expected for all categories. While the former relates to fuel economy the latter relates to health and safety. The limits for the elastomer compatibility requirement (CEC L-112-16) will undergo a moderate adjustment and the Foaming requirements will be harmonized.

It is important to stress that ACEA worked very closely with ATIEL and ATC to find the right balance between specifying the need but not being overly restrictive.

Engine tests – As noted previously, the OM501LA is projected to come to end of life soon, as hardware is out of production and remaining stocks run out. The OM501LA test is currently the main piston cleanliness test in the ACEA HD sequences and the need for a successor test is long anticipated.

Daimler has offered the OM471 Test as a replacement, which is a proprietary test developed by Daimler on Daimler’s OM471 hardware. Work is underway to transfer it into an industry test (hardware and test conditions remain as defined by Daimler) and bring the test under CEC surveillance.

The OM471 test is expected to be more demanding for the lubricant and aims to protect modern engines.

Therefore, the test will be introduced as the piston cleanliness test for the ACEA E8 category, where it will be mandatory. It will also be applied in ACEA E4, but here OM501LA results remain an alternative to demonstrate compliance.

The best way to replace the OM501 in E7 and E11 is an ongoing discussion. It is acknowledged that the OM471 may be too severe for these lubricants, not to mention the undesirable economics of a 600h tests as a replacement for a 300h test.

Recent industry efforts to explore ASTM piston cleanliness tests as alternatives to the OM501LA in E7 and E11, are looking promising. But, since the discussion is on-going, we have no further details to report at this stage.

The Volvo T-13 (ASTM D8048) Oxidation stability test will be introduced to ensure extended oil drain performance for E8 and E11 engine oils. In these categories it will also replace the Mack T-12 lead parameters for oxidation related corrosive wear performance, while the other Mack T-12 wear parameters are being maintained.

Regarding the Mack T-12, this test is currently creating some headaches due to a hopefully only temporary unavailability. This situation is something for ACEA to monitor since if it were to become permanently unavailable this would create a gap in the ACEA sequences.

The tendency of engine oils to aerate in direct injection, turbocharged diesel engines will be screened by the COAT (ASTM D8047) test for E8 and E11 categories. In some engine oil-activated systems, the residence time of the oil in the sump is insufficient to allow dissipation of aeration from the oil. As a consequence, aerated oil can be circulated to hydraulically activated components, adversely affecting the engine timing characteristics and engine operation.

Last but not least is the OM646Bio (CEC L-104-16), which was introduced with the ACEA 2016 sequences for piston cleanliness performance in the presence of biofuel. The initial plan for the ACEA 2021 HD sequences was to tighten the limits slightly, but recently there are discussions questioning the need for the test, in particular as the test lifetime is limited.

In summary, we expect the introduction of three new tests for E8 and two new tests for E11, which explains why these categories are considered upgrades at different performance levels relative to the ‘parental’ E6 and E9 categories. For E4 and E7 there is no intention to upgrade performance, although, it can’t be avoided that alternative tests to the OM501LA do have different appetites.

All test details reported above for E8 also apply to F8 and similarly E11/F11. Additionally, two new low soot wear tests, the CEC L-115 (bearing wear) and the CEC L-116 (ring on liner), are under CEC development. They are intended as a preventative measure against low soot wear in the lower viscosity regime of the F-categories (HTHS@150°C: 2.9 –3.2 mPa*s).

However, despite strong efforts, both test development groups could not confirm wear issues with lubricants in this viscosity window as no meaningful difference in performance could be found between lubricants. The lack of calibration oils with known poor field performance is a common issue with ‘preventative’ tests, i.e. tests designed to prevent field issues rather than reacting to field issues.

Currently the industry is discussing if the need for the low soot wear test should be reconsidered given the learnings from these test development groups.

As it stands today, ACEA is still concerned about bearing wear and ring on liner wear in low viscosity applications. Therefore, releasing the F-categories without low soot wear test is not ACEA’s preferred option. 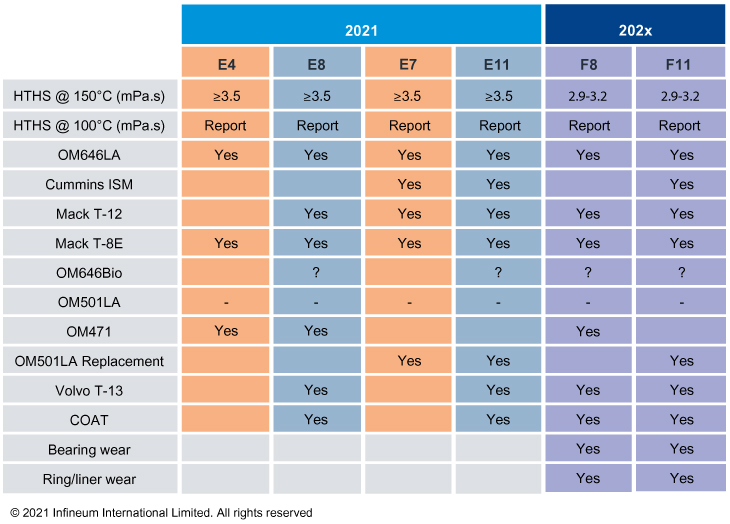 What is happening now?

ACEA aims to release the E-categories in the coming months. Releasing the F-categories at a later date remains the most likely scenario for now.

As reported above there are still many open items requiring attention. The OM471 must become a CEC test, appropriate limits have to be defined for E8/F8 and E4. An industry effort to gather OM471 candidate results to support data-based limit setting was not successful. One can imagine that there are not very many results available in the industry given the newness of the test and the cost involved in running a 600h heavy-duty engine test. However, having OM471 candidate data is just one part of the equation. Limits cannot be set by looking at one test in isolation, compatibility with other sequence requirements has to be checked, notable with the newly introduced performance requirements.

This same approach applies for the OM501 replacement options for E7 and E11/F11, which are currently under discussion. Getting all this work done by mid-2021 is a very ambitious target, we will keep you updated on progress.

If you enjoyed reading this, why not sign up to receive free regular Insight updates direct to your inbox.