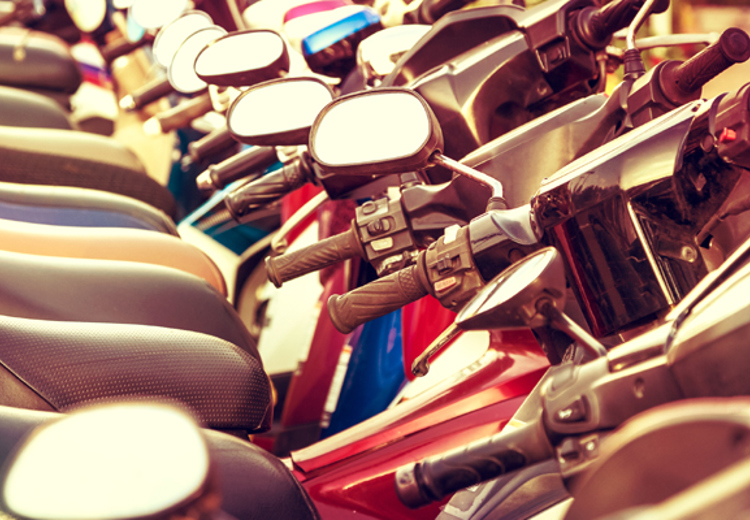 Tightening emissions regulations combined with a need for improved fuel economy and demands for enhanced user experience are driving change in the motorcycle market. The latest balanced motorcycle oil formulations are being designed to meet these requirements while maintaining hardware durability.

As governments work to cut emissions, regulations are being more widely introduced and tightened for motorcycles. In Europe,for example, Euro V standards will apply to all sales of two- and three-wheeled vehicles from 2020. This means reporting of carbon dioxide (CO2) emissions as part of the type approval process will be required. In India, which is now the world’s largest motorcycle market with 17.7 million two-wheeler sales last year, change is also underway. Here, a draft notification of Bharat Stage VI emission standards, equivalent to Euro VI has been issued and will take effect throughout the country for two- and three-wheelers manufactured on or after 1 April 2020.

Future regulations not only limit tailpipe emissions, but also mean bikes will have to pass an evaporative emissions test, run on-board self-diagnostic systems (OBD), and manufacturers will need to prove the bike will still pass the tests after a specified mileage.

OEMs will need to significantly improve engine performance and introduce aftertreatment systems to comply. However, meeting these emissions limits is only one issue. They will also need to address sustainability requirements and meet demands from their customers for an enhanced riding experience.

In our view, meeting all these requirements could be a very hard balance to strike – for both OEMs and oil formulators. In terms of fuel economy for example, reducing engine friction improves fuel economy through the positive impact on engine response and power output. But, it is essential to understand exactly what is influencing fuel economy here. By doing so, additive technology can be developed that ensures the required fuel economy is delivered while maintaining high clutch friction, hardware protection and durability, all of which are essential for motorcycles.

The Stribeck curve broadly categorises friction regimes for lubricated surfaces into boundary, mixed and hydrodynamic lubrication. To improve lubricant derived fuel economy, friction must be reduced by selecting the formulation levers that are appropriate to each lubrication regime.

In the boundary regime, the oil film thickness may be reduced to such a degree that metal-to-metal contact occurs between the moving surfaces. Here, surface-active components such as friction modifiers, detergents and antiwear additives are effective. However, in the hydrodynamic regime, the moving surfaces are separated by the pressure of a continuous oil film. Fuel economy is related to lubricant viscosity, where the viscometric properties of additive components and base stocks have the strongest impact.

This presents a technical dilemma in that using friction modifiers and lowering viscosity, which are key fuel economy enablers, appear contrary to the lubrication needs of a motorcycle.

For example, the addition of a friction modifier can lower clutch friction, which could result in clutch slippage in motorcycles using wet clutch systems. Similarly, formulating to a lower viscosity grade may compromise durability and wear protection, especially in high temperature and high shear conditions. 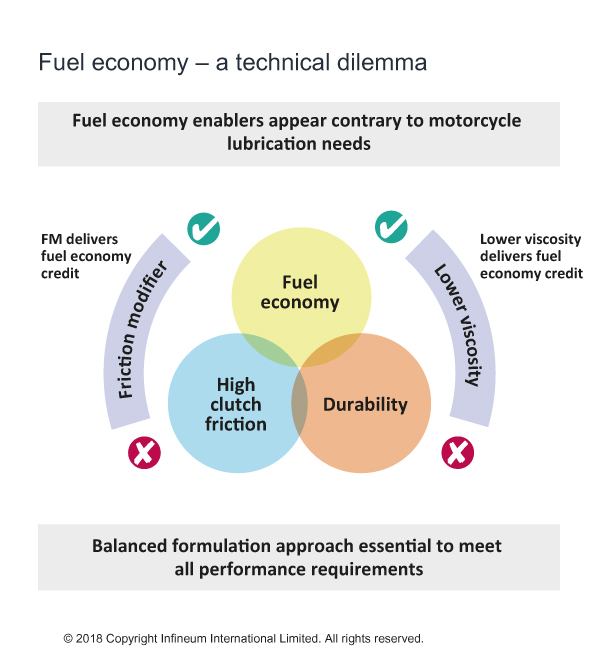 Infineum initiated a research and development programme to assess if these technical contradictions can be overcome by developing a balanced formulation containing the optimal blend of additive components. Initially, a series of bench friction tests was used to screen possible candidates.

The Schwingung Reibung Verschleiss (SRV) and High Frequency Reciprocating Rig (HFRR) tests were used to simulate boundary friction between metal-to-metal contact and the Mini Traction Machine (MTM) was used to simulate hydrodynamic friction regime. The candidates screened included a range of friction modifiers, detergents and dispersants. Friction modifiers and detergents give rise to surface effects, which alter the boundary friction properties, while dispersants are viscosity-influencing and affect hydrodynamic friction.

Following the screener tests, Infineum developed an SAE 5W-30 prototype motorcycle oil using the components that during bench screening delivered the most engine friction credit. This prototype was optimised to achieve JASO SL quality and MA2, which is the highest clutch friction level in the JASO 2016 specification. 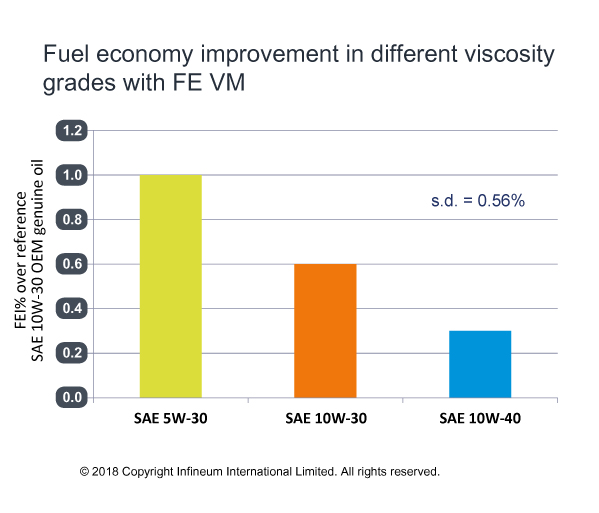 By reducing engine friction the fuel economy oil offers added power to the engine and, at the same time delivers high clutch friction in motorcycles with manual transmissions. OEMs can also be confident that these performance enhancements have been achieved with phosphorus levels at the minimum limit for the JASO T 903 2016 specification.

Gaining a thorough understanding of all the factors influencing fuel economy in engine oil formulations has made it possible to develop a motorcycle oil that offers fuel economy improvement while also delivering other attributes essential for motorcycle performance and protection.