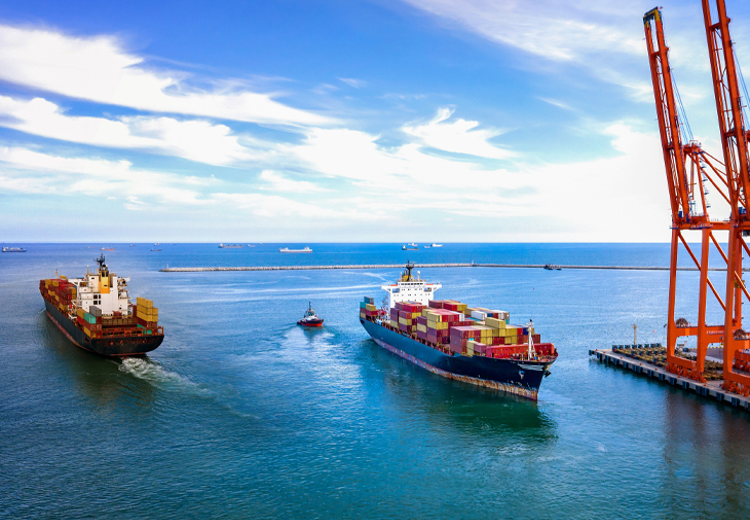 In a changing marine fuels landscape, the current industry Total Sediments test, referenced in the ISO 8217 marine fuel specification, may not always reflect how fuels will perform once in use on board the vessel. Rob Ashton, Infineum Marine Fuel Additive Market Manager, explains how a new spin test, which more accurately represents real-world conditions, is helping Infineum to lead the way in helping to prevent fuel related field problems and to reduce fuel waste.

The key concerns leading up to the implementation of the IMO 2020 sulphur reduction were the doubts associated with stability and onward compatibility of very low sulphur fuel oils (VLSFO). After an initial influx of off-specification fuels in 2020, VLSFO sedimentation issues stabilised at point-of-sale, with most fuels across all regions now meeting the ISO 8217 fuel standard for marine fuels Total Sediments specification of <0.1 mass %. However, significant issues are still being experienced by ship operators regarding excessive sludge discharge, which not only compromises smooth fuel handling operations on board but also carries an economic penalty in the form of fuel wastage.

As International Maritime Organization (IMO) strengthens its level of ambition on the reduction of greenhouse gas (GHG) emissions from shipping it will be important for shippers to look for every opportunity to reduce fuel waste. Currently it is estimated that 2% of the global fuel oil pool is lost as sludge, which could instead be a useable fuel if it was managed more effectively.

For many years, prior to the implementation of the 0.5% sulphur reduction in 2020, the Total Sediments test had served the industry well. However, as VLSFO blends have been introduced, it has become increasingly apparent that it no longer accurately reflects how these fuels will perform on board the vessel. What we have observed is that:

Clearly, the change in the fuel landscape and the nature of the sludge being released is contributing to this change. However, the sediments method itself does not reflect the actual conditions that a fuel can experience in the supply system on board the vessel. For example, a 1.6 micron filter is employed in the current test method, despite the fact that no such filter mesh size is found on board. Furthermore, although it is acknowledged that the extreme ageing conditions in the total sediments methods (TSP employs thermal stress and TSA uses cetane for chemical stress) should safeguard against real-world concerns, it is apparent that they may not translate so well to VLSFO in comparison to the heavy fuel oil (HFO), for which the method was established.

As highlighted in previous Insight articles, Infineum has been evaluating the Alfa Laval spin test as a supporting test to bridge the gap in fuel stability performance between that indicated by the Total Sediments test (ISO 8217 Standard) and real-world fuel performance.

As a brief reminder, the spin test is remarkably simple and carried out with a bench top centrifuge. 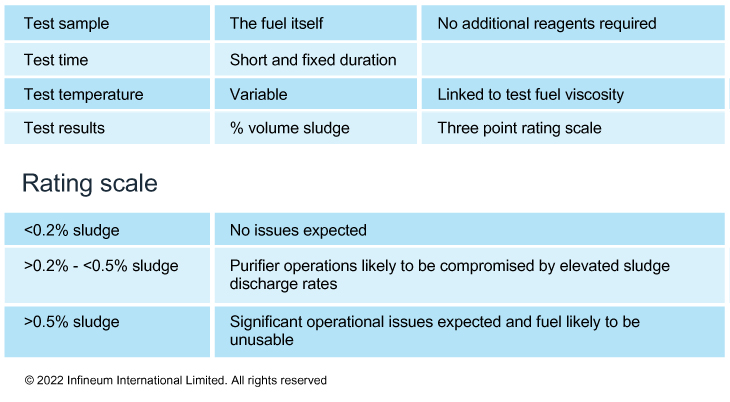 The theory behind the spin test is based on the fundamental scientific principles of Stokes' Law and is directly linked to fuel purifier operations on board ship. In the case of the spin test and purifier operation, it relates to agglomerated asphaltene particles separating from a fuel oil under centrifugal force. The correlation is represented in the schematic below. 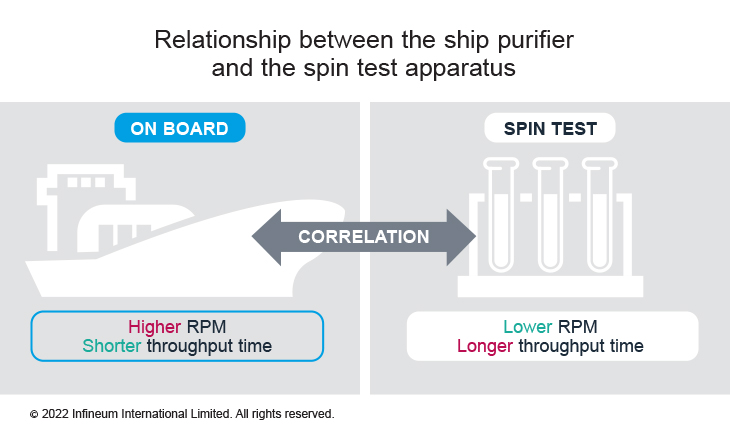 A key attraction of this test is that Alfa Laval has correlated the performance of the spin test to real-world fuel performance in its purifier equipment used on board ships.

Infineum’s evaluations to date have confirmed that the spin test does correlate to real-world performance.

To further stress test this real-world performance correlation we conducted a blind trial on a mixed set of fuels, which were known to have experienced either severe or no issues on board, that were sourced from a major service provider to this market.

From a subset of the data generated, we can see that all four of the ISO 8217 compliant fuels selected were all on spec for TSP and TSA. However three of those fuels (samples A, B & C) exhibited operational issues on board, which could not be predicted by the other physical properties listed. The spin test results however flagged that issues would arise from the use of these fuels. 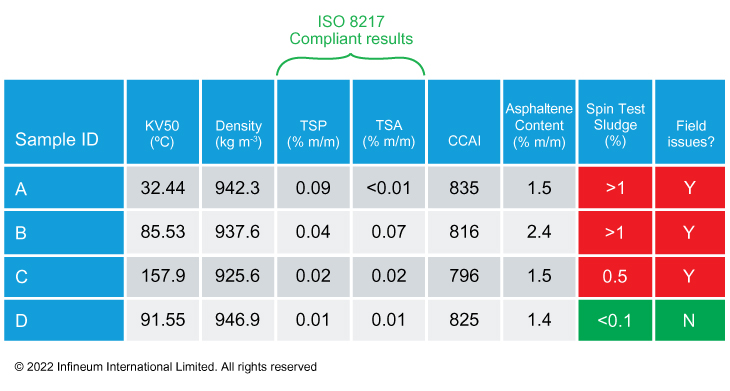 On the other hand, sample D, which has similar asphaltene content and Total Sediments results to sample C, did not have operational issues and this expected outcome was picked up by the spin test. 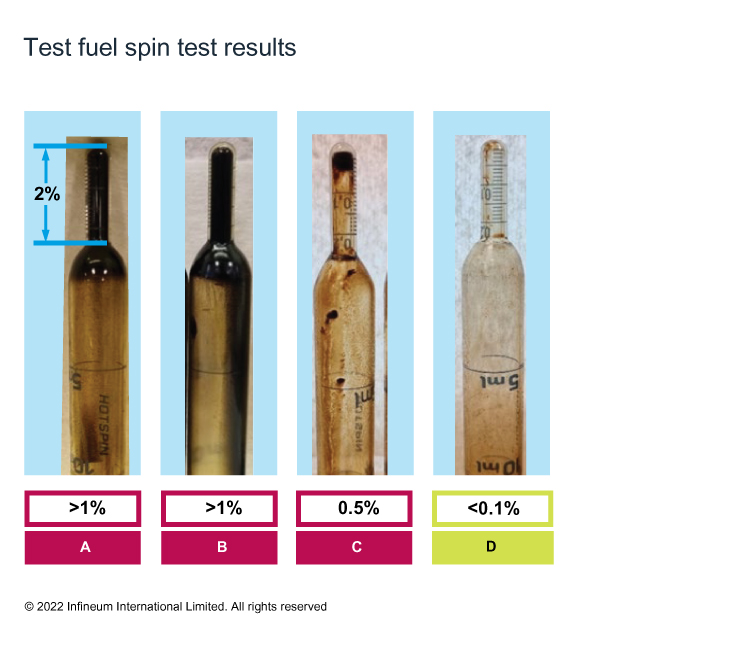 Over the whole sample set, the spin test was able to predict alignment with the on board experience with an overall 85% accuracy. 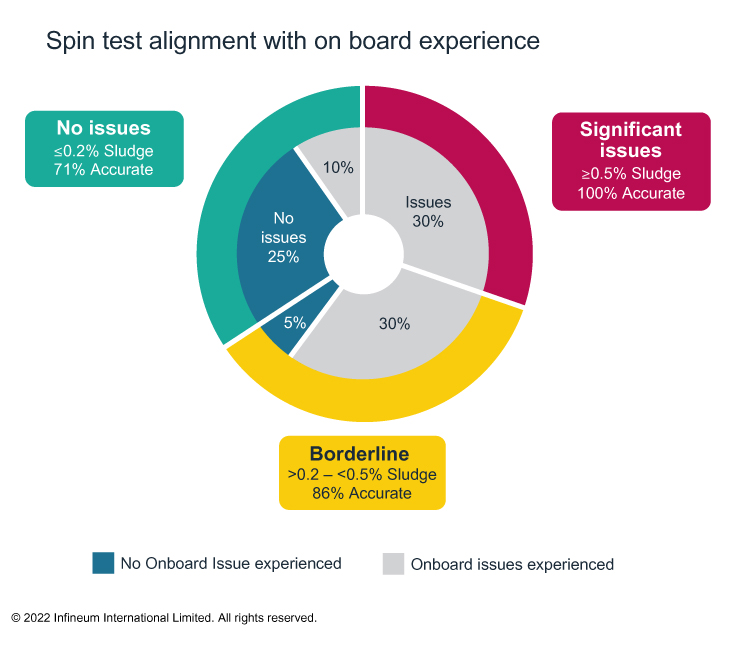 In comparison, the Total Sediments tests (TSP and TSA):

This study clearly demonstrates that the spin test can work in tandem with the Total Sediments tests to provide additional clarity to ship operators on how fuels will operate on board their vessels.

Where high TSP and TSP results are obtained, sludge stabiliser additives can be used to reduce total sediments to ensure on board operability performance. 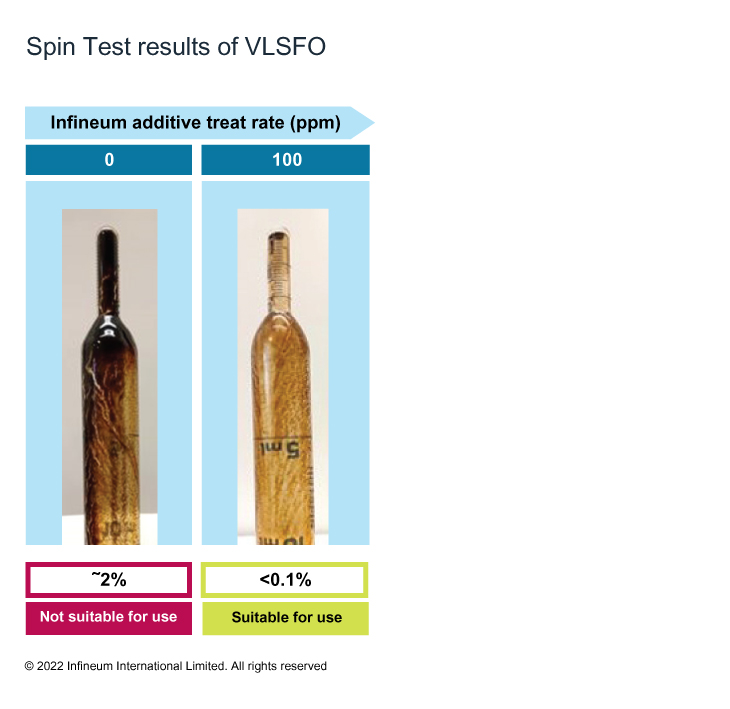 Even at low treat rates, the sludge stabiliser additive can effectively eliminate fuel wastage that occurs as a result of sludge deposition. This can increase the amount of useable fuel by nearly 2%, which translates directly to reduced fuel consumption and cost savings. These efficiency gains are increasingly important as IMO measures to reduce the GHG emissions from ships include a Carbon Intensity Indicator (CII), which enters into force on 1 November 2022. After a period of monitoring to form a base on which CII will be calculated, ships will receive an A to E energy efficiency rating in 2024. Those rated for three consecutive years as D or one year as E will have an obligation to adopt a plan of corrective actions to improve their energy efficiency performance and bring them back to a C rating.

The improved efficiency provided by effective sludge management can help contribute to an enhanced CII rating.

Additional benefits of routine additive use are enhanced fuel handling operations, the flexibility to recover severe fuels and reduced engine damage and exhaust fouling as a consequence of poor combustion.