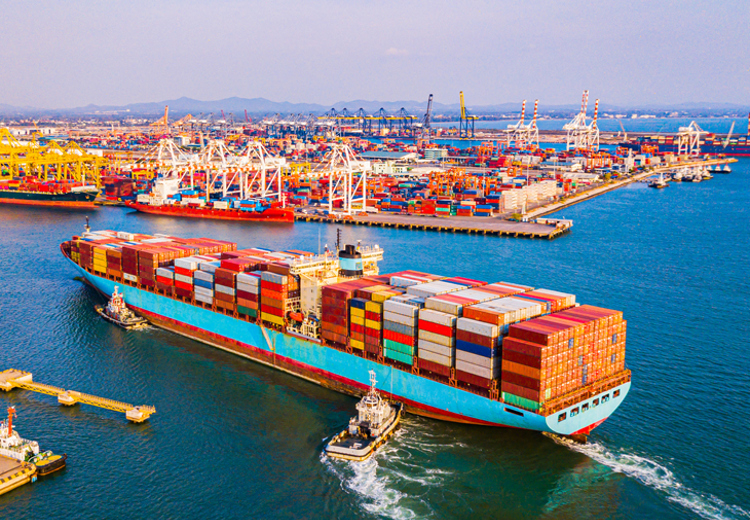 Since the introduction of very low sulphur fuel oils (VLSFO) some of the conventional fuel quality tests have struggled to provide sufficient guidance to ship operators. Rob Ashton, Infineum Marine Fuel Additive Market Manager and Dr Robert Rae, Infineum Fuel Technologist, explains how a simple-to-use spin test, which relates more closely to the stress factors fuels may experience on board a vessel, can give a better picture of whether VLSFOs provided into the marine marketplace are suitable for use.

There are currently two tests that are frequently used in the assessment of marine fuel stability – the Total Sediments test referenced in the ISO8217 standard and the Separability Number test (ASTM D7061). However, in a previous article (click here to read), Insight highlighted the shortcomings of these tests and showed how the Alfa Laval spin test can be used as a tool to assist mariners to determine if fuels are suitable for reliable on board operations from a stability and compatibility standpoint. The test is particularly attractive as it is a simple laboratory test using the fuel in question (with no addition of extra reagents/chemicals) and subjecting it to a short centrifugation step, which can then be correlated to actual on board operation of the ships fuel purifier systems.

In the same article, we also referenced the Separability Number test (ASTM D7061), which responds to a very wide range of dispersant additives at very low treat rates and questioned whether this amount of additive offered any real benefit. In recent work we have been scoping out the potential of the spin test, including a study using a new fuel purification rig (a smaller scale version of what is used on board ship). This work suggests that a low treat rate of Infineum additive technology is effective at providing both excellent reserve stability number (RSN) response and significant on board operability benefits.

In order to understand the mechanisms at work here it is important to first explore the three test methods: Total Sediments, spin and Separability Number, in more detail.

This test features in the ISO 8217 standard. Each test is a two-stage process featuring an aging step, (TSP is thermal aging and TSA is chemical aging) followed by a hot filtration step (TSE) through a 1.6 micron filter where a result of <0.1 mass % sediment is an acceptable result.

The TSP is believed to be a better indicator of a fuel’s relative stability under storage whereas the TSA is thought to better represent fuels’ inter-compatibility. The Total Sediments test has served the industry well for many years. However, following the introduction of low sulphur residual fuel, the test has struggled to provide adequate protection or guidance for ship operators in assessing whether a fuel is suitable for use. For example, fuels having an acceptably low TSP/TSA (<0.1 mass % sediment) can exhibit on board issues with regard to excessive sludging, and conversely fuels having a high TSP/TSA (>0.1 mass % sediment) can operate effectively without on board issues. The 1.6 micron filter used in the hot filtration step may be contributing to the discrepancy as this does not directly equate to the filter mesh that is employed on board.

Infineum asphaltene management additives are capable of reducing TSP and TSA test results. However, high treat rates of additive are required to reduce or to break/disperse the asphaltene agglomerates into a size that is small enough to pass through the total sedimentation filter (see images below).

It is increasingly apparent that a supporting or bridging test is required, one that relates more closely to the stress factors that a fuel can experience in the supply system on board the vessel. Infineum has invested in the assessment of various tests and has determined that the Alfa Laval spin test method could help to provide confidence in operability protection to ship operators.

The Alfa Laval spin test is performed by heating the fuel in question to a defined temperature. The recommended temperature to be employed in the spin-test (and for on-board separation) is dictated by the viscosity of the fuel, as recommended by Alfa Laval. However, the temperature actually used on board may vary for other reasons and so the spin-test can be conducted at any temperature, and which reflects the intended/actual operational environment. The fuel is then placed into a temperature-controlled centrifuge where it is subjected to centrifugal force via a fixed rpm for a fixed period. Once the test is complete, the centrifuge tubes are removed and inverted so that the fuel oil drains out leaving the compacted sediment in the base of the tube. The fuel oil operability is evaluated by determining the quantity of sediment that has come out of solution from the fuel sample and settled at the bottom of the centrifuge tube. The rating system is shown below:

During the course of our test evaluation, we discovered that significantly lower treat rates of Infineum asphaltene management additives (relative to those required for TSP/TSA test reduction) were effective. This was the case for either maintaining fuel in optimum condition for processing through a purifier, or improving a fuel which exhibits excessive sludging without additive, as can be seen in the case below. The test VLSFO represents a severe case, which experienced on board operational issues, having a base TSP of 0.28% mass sediment i.e. well above the ISO8217 specification. In addition to this, additive treatment was ineffective at significantly improving the TSP. However, in the spin test, a low treat rate of Infineum additive has recovered this apparently unusable fuel into one that would not present issues in on board operation. 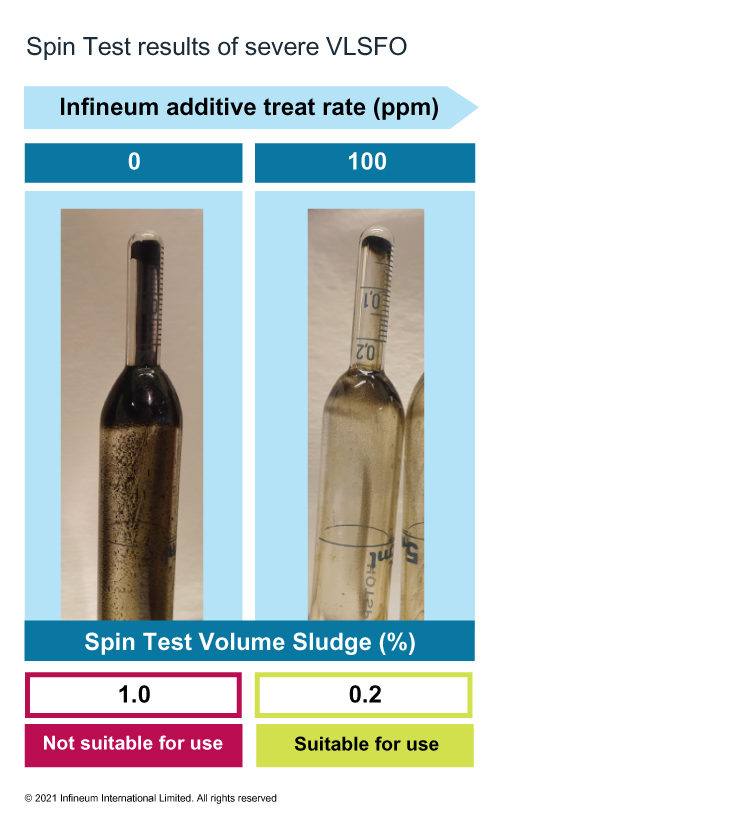 This spin test mimics the forces the fuel experiences as it passes through the ships purifier system and these results clearly show the disparity between the Total Sedimentation test methodology versus a test designed to assess on board operability. To further our understanding of the applicability of this test, Infineum has developed a rig using a ship’s fuel purification system and the results that obtained from the rig align closely with the spin test, showing demonstrably decreased levels of sediment in the purifier bowl.

The Separability Number test measures the reserve stability number (RSN) by adding a fixed volume of heptane to a toluene-diluted fuel oil sample. The measurement is obtained by scanning the sample with a near infra-red source to determine the destabilisation of the solvent-diluted fuel oil sample over a 15-minute period and then the test sample is rated.

Our apprehension about adopting this test methodology has previously been reported.

In our view the test can give overly optimistic results with regards to a fuel’s suitability for use.

We have also expressed our concern that this test is extremely responsive to low treat rates of additive and could give misleading information to a ship operator as to the efficacy of an additive solution. However, recent work in scoping out the potential of the spin test, suggests that low treat rates of Infineum additive technology is indeed effective at providing operability benefits.

We have further investigated the application of the Separability Number test and the additive effect in relation to spin test results. In another problematic fuel sourced from the market, where the base TSP was high at 0.27 mass % sediment, we were able to demonstrate similar spin test findings to those above. That is to say, low treat rate of Infineum additive is effective at reducing the spin test result from unfit for use to, in this case, borderline acceptable. 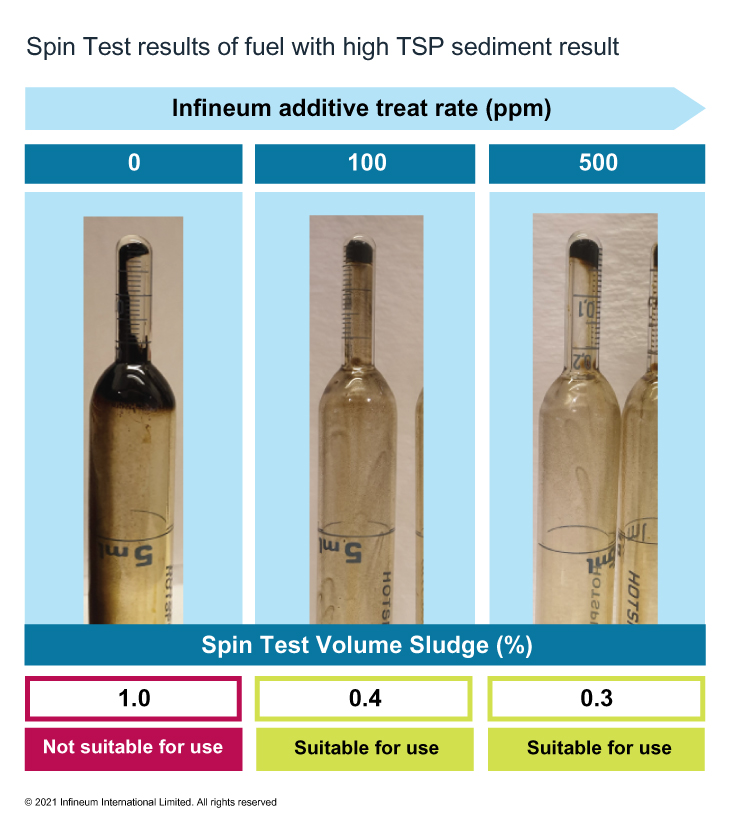 However, this problematic base fuel yielded an excellent low reserve stability number of <1 thus indicating high stability reserve in both the unadditised and additised cases which is clearly not the case.

These results, along with other testing, confirm that the Separability Number test remains unsuitable as a screener test for determining the suitability of VLSFOs.

Infineum has investigated the mode of action of various test methods used to determine if VLSFOs are suitable for use. These studies have established that:

Our investigations support the view that a combination of sedimentation and spin tests along with low treat rates of Infineum additives are the best option to ensure protection for ships and peace of mind for ship operators.