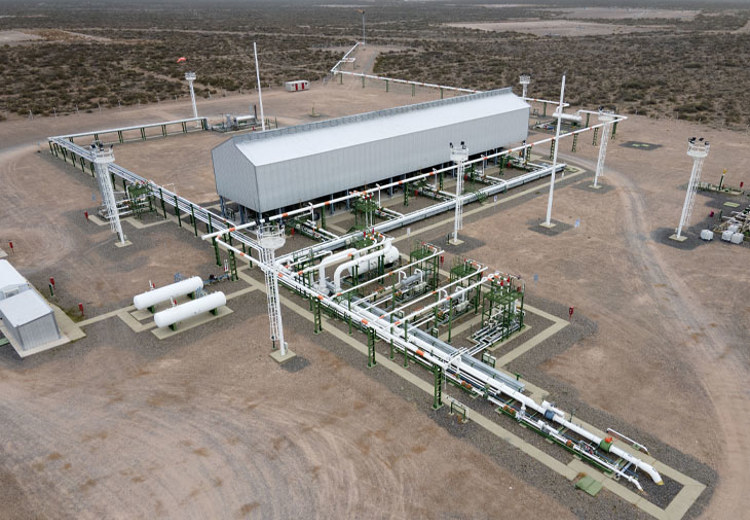 One of the most important criteria for gas engine end users regarding oil choice is its proven ability to keep the engine reliably in operation right through from one oil drain to the next. Margareth Carvalho, Infineum Global Stationary Gas Engine Oil Portfolio Manager, shares the outstanding performance observed in recent 4,000 hour field trials that have resulted in the award of full INNIO Waukesha approval.

Natural gas wells can be located in very remote regions and far from the large cities where the gas is finally consumed. Such remote locations often have difficult access and the engines operate under severe climatic conditions. Despite these factors, the equipment must reliably operate 24/7/365 in a non-stop service to pump natural gas into the pipelines to supply gas fuel for use in industries and cities.

The challenges that gas compression service presents in terms of lubrication is ensuring that long oil drain intervals can be achieved by providing optimum engine performance, maximum up-time and long component life. Since engines can be in very remote locations in extreme climate conditions, the ability for an oil to maintain performance beyond its stated oil drain interval is valuable. In addition, it is critical that no unplanned maintenance is required, which would result in high additional costs and downtime.

To validate Infineum gas engine oil technology, a field trial was run in Waukesha L7044 GSI engines in a very remote compressor plant in a semi-desert region in South America.

The engines in use had been operating reliably for many years, but they also had a history of issues in the past due to the severity of the application. Reported issues with valve sticking were solved after changes in lubricant technology and reductions in oil drain intervals.

At the facility, clean, pipeline natural gas from the field is compressed using Waukesha L7044 GSI V12, 115 litre engines that operate 365 days a year at an average load of 95%. The field trial was run with the latest Infineum top tier formulation versus a competitor lubricant as the reference. Tests were run in accordance with the Waukesha oil approval protocols, used oil analysis and end of test inspections were carried out by certified third party laboratories to ensure the impartiality of the reports.

INNIO Waukesha approval protocol requires a 4,000 hour test and allows the oil to be changed during the test. This test was structured not only to gain OEM approval, but also to allow performance comparisons between tested products and, due to this reason, the oil changes were carried out at approximately 3,300 hours for both oils. The trigger for the oil change of both products was the Base Number (TBN) limit, that was crossed first by the competitor lubricant. The Infineum oil demonstrated superior performance and could have stayed in use for a longer time in the test. 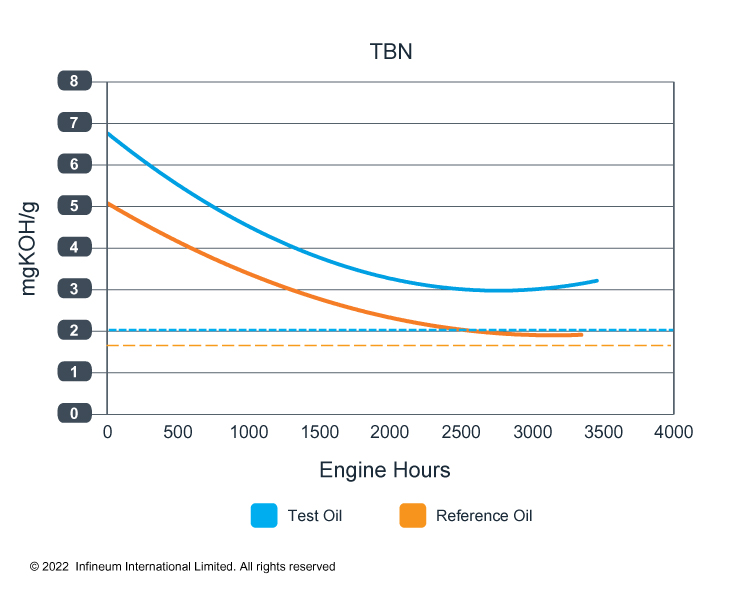 Trendlines of Base Number results show that the competitor oil reached the 30% limit specified by the OEM after 3,000 hours and triggered the oil change in the engines.

Other oil analysis showed that metal levels (e.g. iron) stayed low - where high levels can be an indication of engine wear. Kinematic viscosity growth was good for both tested oils. Oxidation and nitration are also important parameters for this Waukesha rich burn engine type. Nitration deserves special attention since the higher combustion chamber temperatures generate significant amounts of NOx that reach the oil via blow-by and may result in shorter oil drain intervals by boosting the oil nitration. While nitration for the reference oil climbed steadily, Infineum technology demonstrated outstanding control, ensuring a large safety margin well below the condemning limit. 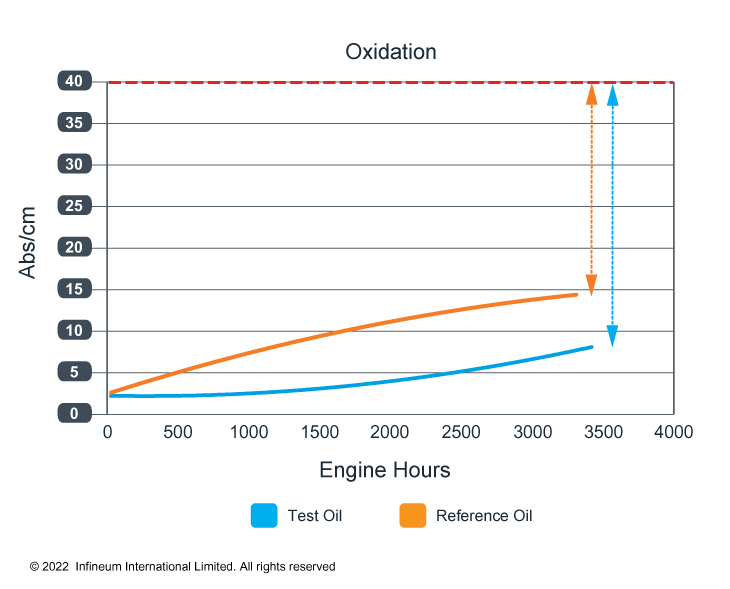 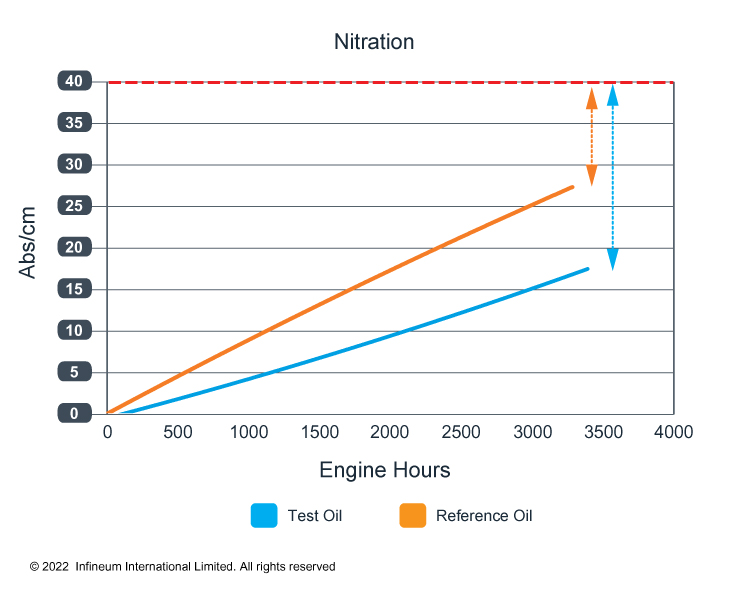 The Infineum formulation gave outstanding performance in oxidation and nitration control, showing superior performance when compared with the competitor product in severe application.

At the end of test the engines were stripped for inspection and parts rated by a certified independent laboratory for OEM report. On the test site, the engine operators observed minimal ash build up with good control of cleanliness in the piston rings, grooves and lands. They also noted there was no lacquer on components such as the valves, no varnish on the sleeves, a low amount of deposits on the surface of the cylinder heads and the bearings were clean and in good condition. 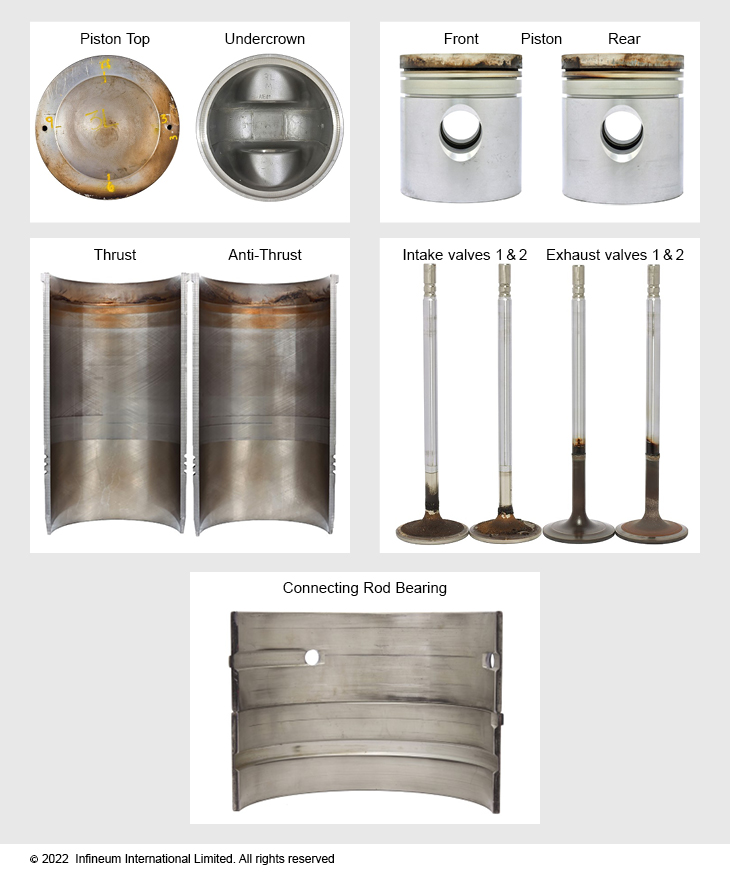 At the end of the test, parts from the engine running the Infineum technology were clean and in good condition (top and bottom view of piston; Side view of pistons (skirt, lands, grooves); liner; valves and bearing)

Gas engine operators are looking to maximize profitability, through improved reliability and longer service intervals. This requires robust lubricant technology designed to ensure reliable and efficient operation that keeps the engine running 24/7 until the recommended maintenance interval and beyond.

Since there are no industry-wide engine oil standards, end users typically change the oil based on the OEM’s recommended requirements for oil condemning limits. However, many of the parameters assessed are common, including the oil’s ability to control viscosity increase, oxidation, nitration and base number depletion over extended periods. This is needed to maximise the time between drains to add flexibility and peace of mind to different engine owners over different OEM requirements.

Without industry standards, it is vital to test the performance of new formulations in real-world operating conditions in the latest available hardware.

Some OEMs, including INNIO Waukesha, have introduced lubricant approval processes that include both chemical and physical testing and extensive field trials to help ensure their engines are sufficiently protected over the required drain interval.

This field trial demonstrates the ability of the new Infineum high performance engine oil to deliver exceptional cleanliness and long-lasting protection for the latest natural gas engine technologies. Enabling the options for longer service intervals to be reached, plus the flexibility that having a robust and reliable oil provides, helps to reduce operating costs and improve productivity.

Following these extensive trials, Infineum is proud to say its technology, which outperformed the already robust competitive product, has been formally approved by INNIO Waukesha for use in Waukesha Series 4 and Series 5 engines.