How can you test for wax settling and avoid deposition issues? 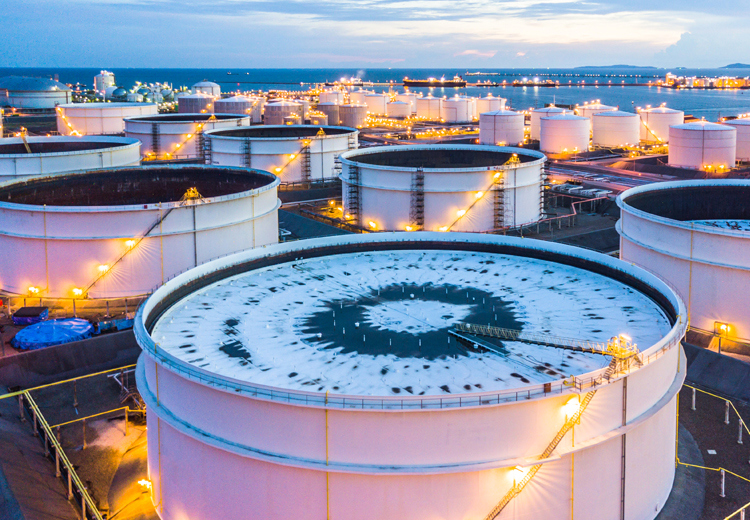 To maintain the world's energy supply it is essential to ensure the efficient production, storage, transportation, and refinement of crude oil. Dennis Compton and Ruth Downie, from the Infineum Crude Oil Additives Group, explain how additives and a new field-specific test are the most reliable ways to handle the wax management issues that can arise throughout the crude oil life cycle, thus ensuring that lines and valves are not blocked and oil continues to flow freely.

The oil and gas industry has experienced many ups and downs in the last few decades. Most recently, the Russia/Saudi Arabia oil price war combined with the global coronavirus pandemic sent oil prices and demand crashing to historic lows. When global demand for energy drops before production cuts have a chance to take effect, a pronounced storage crisis can result. This may lead to crude oil around the globe sitting for longer than anticipated in these storage conditions while the supply/demand curve rights itself or supply and demand come back into balance. During these prolonged storage periods wax deposit issues can be even more of a challenge to overcome. 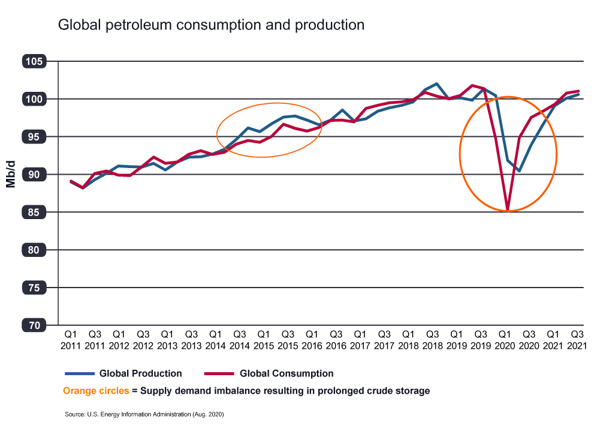 The recent supply demand imbalance, caused by the COVID-19 pandemic, resulted in 23 million barrels of crude in the US being pushed into the Strategic Petroleum Reserve, which was made available to help those who could neither sell nor store the surplus. And, according to the Energy Information Administration, the 13 OPEC oil producers, who between 2010 to 2019 had an average surplus of 2.2 million barrels per day (mb/d), look set to have almost 6 mb/d surplus in 2020.

The challenges associated with wax deposition in waxy crude oils are not new, as anyone involved with its storage and transportation is only too aware. Regardless of the storage location, wax will precipitate as the temperature of the crude oil drops, which can result in restricted or plugged flowlines, blocked valves and coated storage tanks.

Up and down the supply chain, wax related issues can result in increased cleaning costs, slow pumping times and a reduction in the volume of product delivered.

When engineering systems such as heating, agitation, and blending are unable to prevent the deposition and build up of wax, chemical solutions can be applied. However, it is important that the testing of chemical additives is customised to the situation and conditions of the crude oil. Currently, the most commonly used test is pour point described by the ASTM D5853 method.

However, in our experience, pour point testing alone is not the most appropriate way to characterise wax concerns for all crude oils. When the wax settles, before the sample becomes a uniform gel, a biphasic sample is formed. In this case, the pour point is artificially lowered and the test offers no insight into the best solution to counter wax settling. Additionally, gelation can be a gradual process that begins above the pour point. In this case, a pour point measurement alone does not tell the full story since it provides no indication as to the amount of settling or gel above the pour point and below the wax appearance temperature.

To help overcome these challenges, the Infineum Wax Settling Test has been developed as an improved method for working with low pour point/high deposition crude oils. The Infineum Wax Settling Test is designed to improve additive selection by assessing the ability of chemical additives to modify wax crystals. Correct additive selection reduces wax settling during storage or static conditions and ensures the crude will flow when needed.

One of the key challenges in the movement of crudes is reducing the build up of wax deposits in storage and transportation, in order to minimise loss of product volumes. By using additives, the morphology of any wax crystals that form can be altered, keeping them more mobile and ensuring fewer adhere to the vessel walls, thus reducing losses.

Infineum has developed a bench test to simulate wax precipitation and settling in static conditions that provides information relating to wax settling and the pumpability of crude oils when deposits have formed.

As the video demonstrates, in the large-scale Infineum Wax Settling Test, additive-treated crude samples were significantly easier to pump than untreated samples - more than 90% of the oil was removed from the vessel vs. 70% when using untreated samples. The untreated sample left a thick heavy deposit that was difficult to remove.

As you can see in the cooling process, the waxes begin to appear around 30 degrees Celsius and this is true for both the treated and untreated crude oil.

You can see the wax crystals are already smaller in the treated sample as the oil is clearer and it’s easier to see the spigot on the bottom left hand side of the container when compared to the untreated sample.

The spigot is important because through that spigot we’re pumping approximately 5 PSI of nitrogen to maintain a gentle nitrogen blanket over the crude oil during the course of the experiment.

Now you can see that the waxes are settling during this time as well. For the treated sample the crystals stack more and are lighter than the denser larger crystals in the treated sample. As the waxes settle, you can see that the nitrogen is actually able to move the smaller, lighter, looser packed crystals on the treated side and its able to have this kind of dancing effect as the nitrogen breaks through the layers of wax which have settled and collected. This does not occur on the untreated side.

We believe the nitrogen is forced to find a different route through but the weight of the crystals was so densely packed that it could not move the crystals as we see on the treated side of the sample.

The final temperature of zero degrees Celsius was chosen as a worst case scenario to maximize the amount of wax precipitating from solution.

We began to remove the oil after approximately 92 hours. When the oil begins to flow out of the system, you will see that it pumps out faster on the treated side – it is nearly 40 minutes faster, when we take a closer look at the time stamps. This is due to the smaller wax crystals moving faster and smoother through the drain.

You can see the coils, you can see the spigots and there is more build up on the sides of the untreated test – demonstrating that Infineum wax paraffin inhibitors are able to modify the crystal growth to keep them from depositing on the sides and when they settle out they are light enough to move through the system.

Using the proof of concept derived from the large-scale test, the test was miniaturised to make it more accessible and useable. The custom test enables easy temperature adjustment to mimic field storage temperatures for which there is a concern. Using the miniaturised version of the test, multiple oil samples and additives can be screened simultaneously, and dose response curves can be generated to optimise dose recommendations.

The Infineum Wax Settling Test can provide insight into the behaviour of precipitated waxes, and offers benefits in additive selection over the pour point test in many oils.

As previously described, in some cases waxes precipitate quickly and settle, creating a biphasic sample. In these cases, pour point cannot be measured and the Wax Settling Test is a useful alternative. In other cases, the pour point may be low, but there can be a significant deposition issue above the pour point that requires treatment.

Pour point testing of a North Sea crude oil revealed a low pour point that could be easily lowered without discrimination of additives. However, the Infineum Wax Settling Test showed significant deposition issues above the pour point. Additives were found to have a more variable impact on this deposition, and the Infineum Wax Settling Test was able to provide insight into the most appropriate additive to use when pour point could not. 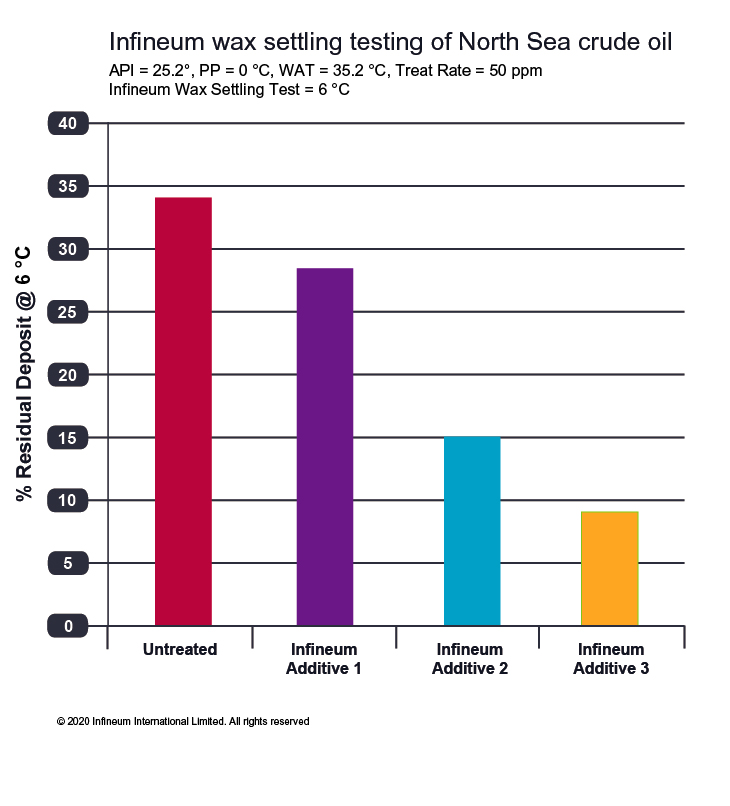 By using the Infineum Wax Settling Test with Infineum crude oil wax inhibitors, additive recommendations can be provided for challenging oils when pour point is not an adequate test. 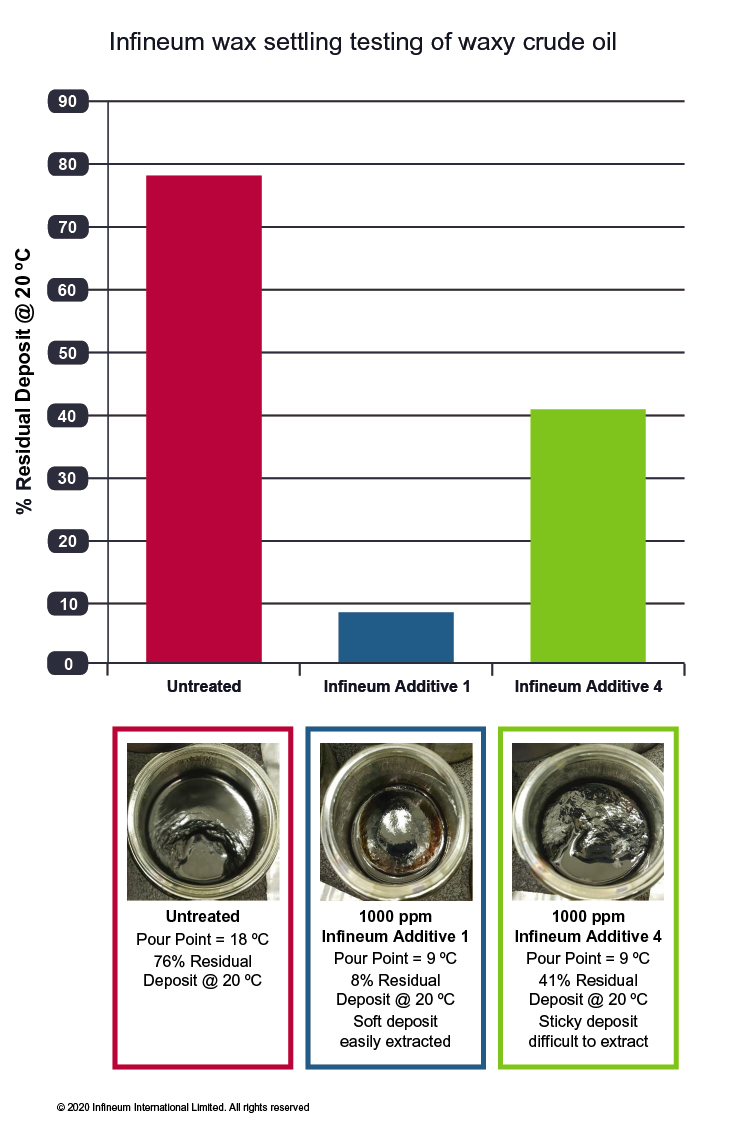 The Infineum Wax Settling Test can be used to provide insight into deposition behaviour above the pour point, leading to more effective additive selection

Infineum is a world leading speciality chemicals company and has been developing wax control additives for nearly 50 years for use in lubricants and fuels. Its Crude Oil Additives Group is now applying that knowledge to the development of new tests and technologies to address the toughest challenges arising during the transportation and storage of waxy crude oils.

Additives have demonstrated the ability to improve crude oil flowability and decrease deposition.

The wax related issues are different depending on the origin of the crude oil, its performance and wax solubility. Infineum has developed an insightful test, which enables the most effective additives to be more easily identified. In addition, the range of effective wax management polymers available allow solutions to be customised for each crude and each requirement to ensure optimal performance is delivered.