Developing motorcycle lubricants is a complex business. Formulations must not only meet the needs of OEMs, who are looking for dedicated lubricants to protect the engine, clutch and gears, but also the regional needs of end users. Infineum Technologist, Pei Yi Lim, provides an update on the latest research, which demonstrates the field performance of motorcycle oil additive technology.

With these requirements in mind, Infineum developed additive technology, which enables the formulation of superior and unique motorcycle oil. In November 2015 Insight reported on the results of an evaluation of the technology. In this initial study, bench and engine tests were used including: the Modified FZG Pitting Test, extended JASO T903:2011 Clutch Friction Test and API SN demonstration program. In addition, preliminary field trials data were presented. Read the full article here.

Field trials are considered to be the most effective way to evaluate an oil.

As part of the extensive demonstration of performance for this new technology, Infineum has recently completed a second field trial.

Used oil analysis, performed every 2,500km, looked for any abnormal trends that might indicate a potential engine or oil issue. To obtain the best view of the effect of the oils on the engine parts, the engine was disassembled for inspection at the end of the trial and rated using the CRC Manual No. 20 method.

This performance can be seen in metal wear used oil analysis averaged over the three vehicles run on each oil. While the concentration of aluminium, typically present in piston, oil pump and friction clutch, was similar for both oils, the concentration of iron, a metal commonly found in liners and tappets, was consistently less in the candidate oil than the reference oil. We believe these excellent results can be attributed to the formulation balance, which optimises antiwear surface effects, the salicylate detergent, which also provides wear credits and the star polymer viscosity modifier, which maintains adequate oil film thickness. 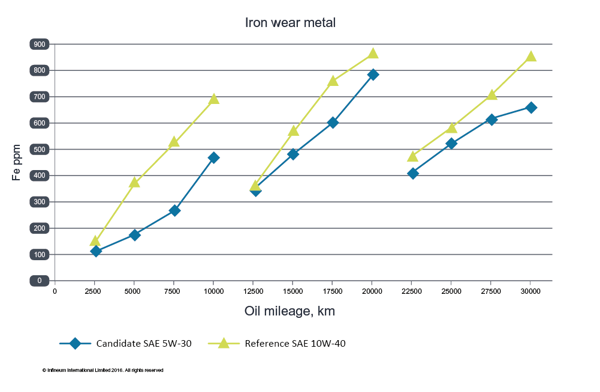 Minimising deposits, especially on the valves and pistons, is essential to prevent valve/ring sticking and abrasive wear. In terms of intake valve rating, the candidate oil showed significantly better performance compared to the reference oil. And, while piston skirt and land deposits were similar for both oils, the candidate delivered a greater advantage in the critical piston grooves region. In our opinion, this control of deposits in the piston grooves and valve region can be attributed to the salicylate detergent. 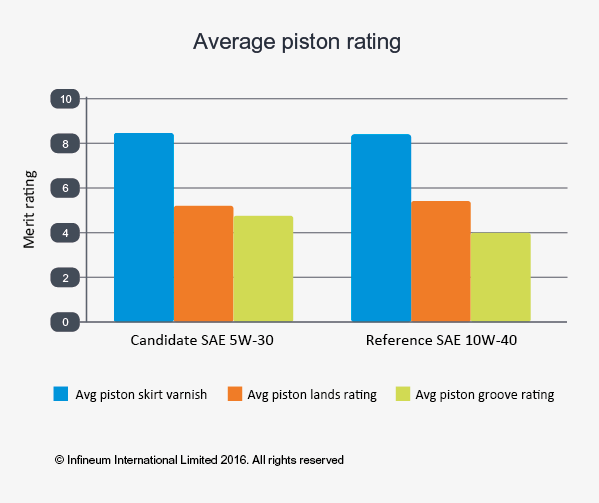 Engine cleanliness plays a key role in maintaining the power and efficiency of the motorcycle. Sludge formation can lead to blocked oil ways, which in turn could hinder lubrication and result in engine wear and ultimately, engine seizure. The ratings of the engines at the end of the field trial show good and comparable sludge and varnish control between the candidate and reference oils. 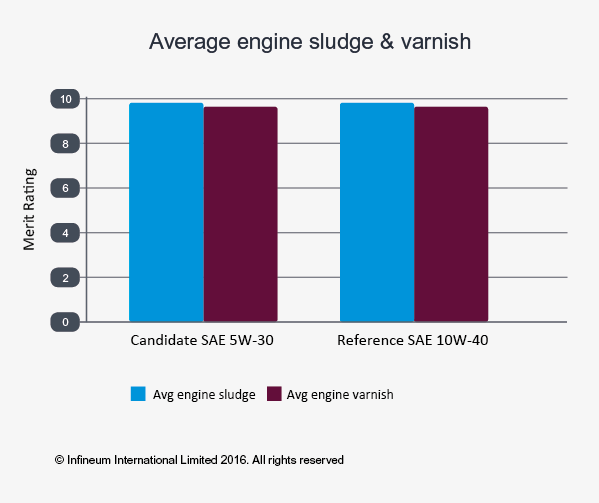 Oil consumption, which can be affected by both viscometric and additive effects, was monitored during the field trial by measuring the change in oil volume during each oil sampling. With the higher volatility of the SAE 5W-30 candidate oil, higher oil loss could have been expected relative to the SAE 10W-40 reference oil. However, comparable oil consumption data was noted for both oils. This demonstrates that the right additive balance can improve oil consumption through maintaining engine cleanliness and thermal stability. 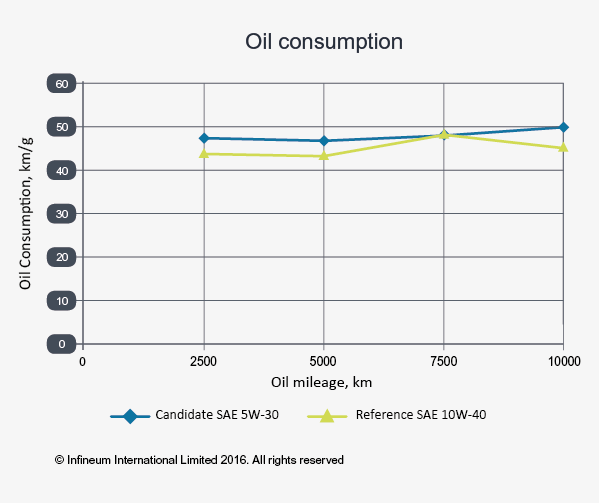 The motorcycle engine oil also has important roles to play in the lubrication of the gear transmission system and in durability protection to prevent gear pitting. At the end of the field trial, the gear transmission system of each motorcycle was also rated, based on light, medium and heavy spalling classification. The ratings of the gears in the candidate and reference oils were comparable, despite the fact that the candidate oil was thinner. In addition, the candidate oil was formulated with a lower phosphorous content, which could be of value to some applications being deployed by motorcycle OEMs. 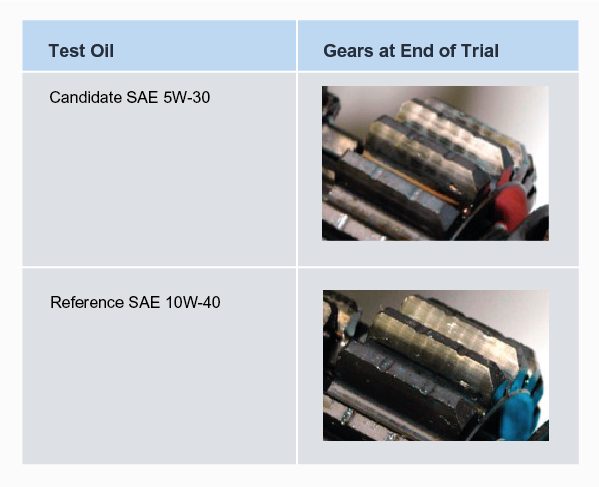 Delivering performance comparable to the reference

The SAE 5W-30 candidate oil, formulated with superior and unique motorcycle oil additive technology, delivered engine cleanliness, deposit control and durability comparable to the thicker SAE 10W-40 OEM Genuine Oil reference oil. In addition, the candidate oil proved it lubrication capabilities when tested in a hot and humid climate and under extended ODI. This demonstrates that using a carefully balanced combination of advanced additive systems makes is possible to move to a lower viscosity grade without compromising performance.

Infineum superior and unique motorcycle oil technology has been specifically designed to protect current and next generation motorcycle hardware and to deliver performance advantages.