Tracking the challenges and changes in the world of railroad freight 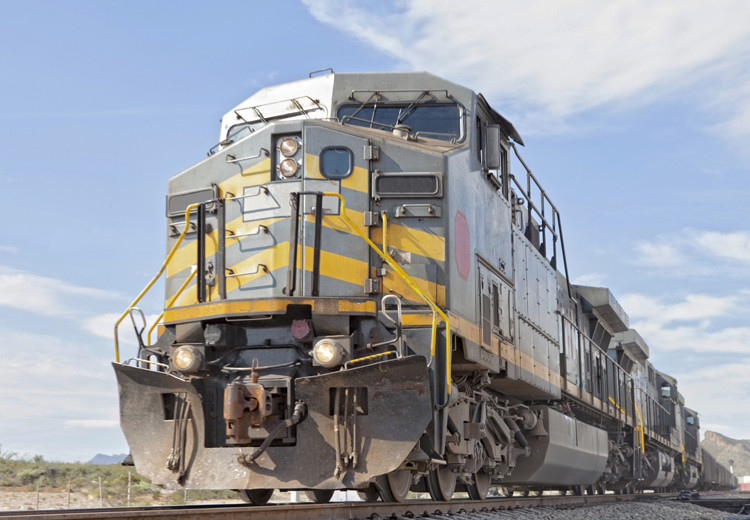 At a global level, the quest to reduce transport-related air pollution is making rail an attractive option for the movement of freight. Insight explores the emerging trends and looks at the American market, where emissions regulations are impacting hardware technology, which is in turn influencing lubricant formulation.

According to the World Trade Organization, despite current tensions, as new technologies continue to reduce costs, international trade could grow yearly by 1.8 - 2 percentage points until 2030. This increased trade means increased freight movement and, although road is currently the dominant mode of transportation, things could be set to change. As the world takes a hard look at the potential effects of vehicle emissions on both human health and the environment, less polluting transportation solutions are being sought. Rail is reported to be more efficient than road and this, combined with worsening road congestion and rising road freight costs, means there could be a real opportunity for rail freight operators.

The four biggest markets in terms of goods transported by rail are the US, Russia, China and India.

In the US, 2018 freight rail traffic was positive for the most part. According to the Association of American Railroads (AAR), for the year, 13 of the 20 commodity categories they track saw increased carloads. On the negative side, coal continued to suffer from market forces that favour natural gas and renewables for electricity generation. AAR suggests that 2019 performance will depend on how the domestic and global economies hold up and on the monetary and trade policies that are agreed.

What is different in the US from many other regions of the world is that the rail industry is owned, funded and operated by private companies.

Their steady spending on infrastructure, equipment and technology, some $25 billion annually on average, means America’s freight railroads are becoming cleaner and greener. According to AAR, if railroads did not move freight in the United States it would take over 120 million additional trucks traveling on public roadways to handle the freight Americans rely on every day.

Russia is seeing a revival in freight levels and, although more than 65% is carried by road, rail comes in second with almost 17%. In the second stage of expansion plans running from 2016 to 2030, Russian Railways, the state-owned railway monopoly, is pouring billions of dollars into developing rail transport. A small part of the plan involves investment in almost one million new freight wagons, more than 23,000 modern locomotives, and the installation of some 20,000 km of track. International freight is integral to the success of Russia’s rail carriers and $43 billion is being spent on developing new ‘through’ freight services between Asia and Europe. Russian Railways says it expects that implementing the full strategy will result in an increase of the Russian rail network coverage of 24% by 2030, while a near-trebling of transit traffic will contribute to a projected 60% increase in freight volumes.

China and India are the leading markets in Asia and combined account for more than 80% of the diesel locomotives operated in the region.

In China, the state-owned China Railways Corporation has handled rail operations since 2013. In 2017, although 48 billion tons of freight was hauled, more than three quarters of the deliveries were made by road. But, with pollution control high on the Government’s agenda, and Chinese trucks reported to produce 13 times more pollution per unit of cargo than trains, this is something that looks set to change. Plans announced in 2018 by the Ministry of Ecology and Environment are designed to boost rail freight capacity and raise the volume of goods delivered by trains by as much as 30% by 2020.

With the railways sector poised to become one of the major drivers for India’s economic growth, the Government is investing to upgrade the aged railway infrastructure and increase its transportation capacity. The high number of railway projects, and the accompanying considerable financial requirements, means there is a growing trend for cooperation between domestic and foreign companies and the public sector. Through these initiatives, Indian Railways is reported to be targeting to increase its freight traffic from 1.1 billion tonnes in 2017 to 3.3 billion tonnes by 2030.

Global finished oil demand from the railroad sector is in the order of 200 million gallons per annum, which represents 1% of global lubricant demand.

With lubricant use roughly proportional to freight ton-miles, and the use of rail to move freight set to increase, the outlook for finished oil in this segment looks positive.

Focus on the US

Despite line electrification and the experimental use of natural gas, diesel is still the major fuel used in railroad applications. To reduce emissions from diesel engines, increasingly stringent legislation has been introduced, from Tier 0 in 1973 to the latest Tier 4 introduced in 2015. Although emissions limits and engine designs follow 9 – 14 years behind on-highway, the latest targets for new line-haul locomotives have cut NOx 76%, particulate matter 70% and hydrocarbons 53% from Tier 3 levels.

Class I railroads are the long-haulers in the US, accounting for nearly 69% of the industry’s mileage. However, currently 60% of the Class I fleet is running Tier 0 technology and almost 40% of the locomotives are over 19 years old. With annual engine replacement rates running at about 3% it could take many years for the fleet to rollover to these new engines. 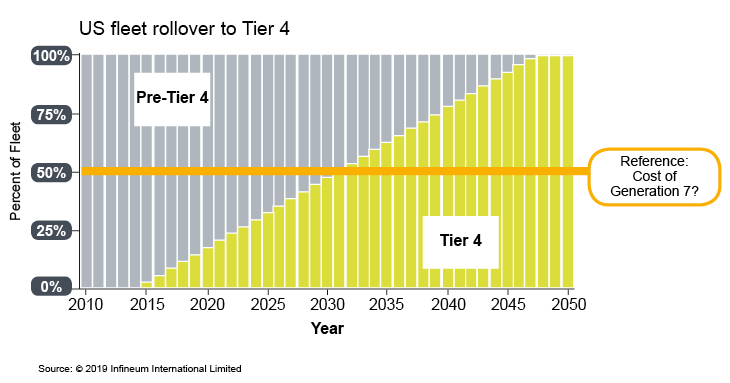 The key lubrication questions here are how can operators choose the best oil to protect their hardware and at what point does it makes economic sense to make the change to Generation 7? Taking a quick look at some of the key differences between the Generations:

Generation 5: designed for use with high sulphur diesel (500-5,000 ppm) fuels, they are generally formulated to 13 or 17 base number (BN) and deliver improved oxidation, viscosity, and insolubles control over previous Generations. In addition, they offer extended oil drain intervals (ODI) to 180 days in low oil consumption engines.

Generation 6: introduced for use with both ultra-low sulphur diesel (<15 ppm) and low sulphur diesel (15-500 ppm) fuels from 2012. Since the combustion of these fuels results in less acid production, the oils generally have lower BN (9 or 10) and sulphated ash than Generation 5 oils.

Generation 7: designed for use in the latest Tier 4 engines, which typically run hotter and have smaller sumps. They contain lower levels of sulphated ash phosphorus and sulphur (SAPS) (SA <1.24%, P <50 ppm, S <0.5%) than previous Generations to sufficiently protect the aftertreatment systems, which can include exhaust gas recirculation, diesel oxidation catalysts and diesel particulate filters.

To help simplify logistics, railroad fleets would generally like to stock only one oil.

The good news is that in today’s low sulphur fuel market, any Generation 6 or 7, zinc-free lubricant can be used in almost any engine. 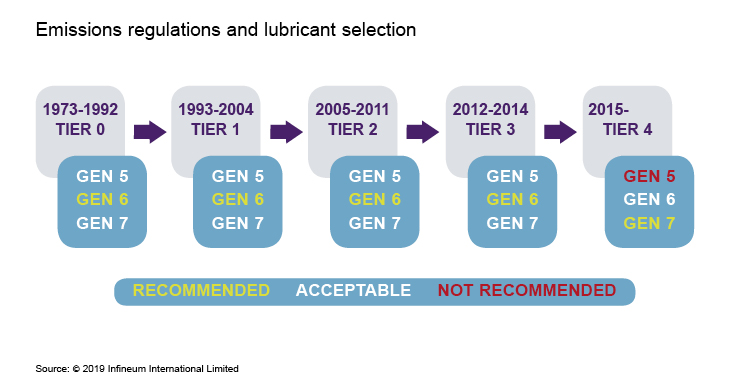 Ultimately it is down to fleet operators to decide when it is time to upgrade to the new Generation 7 oils. Decisions will largely be based on the mix of hardware in the fleet and will take into account oil purchase cost vs. maintenance costs and the difference in ODI offered.

Freight railroads are the most environmentally friendly way to move freight over land. According to AAR, in 2017 railroads moved one ton of freight an average of 479 miles per gallon of fuel, double the average in 1980. These efficiency improvements mean that if 10% of the freight moved by the largest trucks moved by rail instead, fuel savings would be more than 1.5 billion gallons per year. However, despite rail’s relative efficiency, diesel fuel costs represent a large portion (15-25%) of operators’ costs.

In our view there will be an increase in the demand for SAE 20W-40 multigrade oils, which are formulated to deliver hardware protection and fuel economy benefits.

Infineum has developed specific SAE 40 and SAE 20W-40 railroad engine oils based on salicylate technology, which are flexible enough to meet the needs of the latest Tier 4 engines. These railroad products have been designed to offer protection over extended drain intervals, enabling engines to stay reliably in service for longer, which can help operators to maximise profitability.