The inclusion of sulphur limits in passenger car and heavy-duty diesel lubricant specifications and the shift to lower viscosity lubricants means the use of Group I base stocks has been driven out of modern crankcase formulations. In addition, the advantages of Group II, combined with its high availability and lower cost, mean it is increasingly being used instead of Group I in a wide range of applications.

Despite the fact that Group I still accounts for over 40% of global nameplate capacity, these trends mean Group I production is expected to continue to fall in the future. A knock-on effect of the reductions in the global capacity of Group I base oils is that less bright stock is also being produced.

Bright stock is a high viscosity base oil that is used in marine lubricant formulations to achieve the correct viscosity. Currently both trunk piston engine oils (TPEO), used in the four-stroke engines of coastal and cruise ships and marine diesel cylinder lubricants (MDCL) used in large two-stroke engines use bright stock as a thickener.

Marine formulators have two choices: continue to use bright stock, which is becoming increasingly expensive, or consider alternative thickeners.

87% of global marine lubricant demand comes from deep sea marine applications. To help address the bright stock challenge in this market segment, Infineum has assessed a number of alternative thickeners in MDCL formulations.

As part of the testing it was essential to ensure the replacement could deliver the same performance as bright stock, in terms of, for example, cleanliness and wear, at acceptable treat rates.

Initially all of the oils were assessed by laboratory bench tests, which were designed to eliminate those that did not deliver the required performance.

All of the thickeners achieved the required viscosity at low treat rates.

The oils were tested for wear protection, detergency, oxidation, foaming and storage stability.

At this stage, based on poor detergency results, two candidates were rejected. The remaining three, which included the Infineum thickener (A), were taken forward into engine rig tests.

The Bolnes engine rig test was used to assess the performance of the three remaining oils, against the reference, prior to field testing. The single cylinder, two-stroke diesel engine was used to evaluate piston cleanliness and cylinder liner wear.

One of the engines failed prematurely, resulting in its removal from the trial. In terms of piston cleanliness, the remaining candidates delivered similar performance to the reference. All oils showed good control of deposits on the piston head and piston ring grooves.

The oil formulated using the Infineum thickener (A) delivered slightly better cylinder liner wear test results than those obtained for the other test oil and the reference.

Based on this performance, oil A, formulated with the Infineum thickener, was taken forward into the field trial.

The ultimate verification of a lubricant’s performance is a full-scale OEM approved field trial. The test oil and reference were run in two separate cylinders of a MAN D&T 12K98ME Mark 7 engine for 5,000 hours.

Throughout the test the candidate oil delivered similar performance to the reference in terms of wear and base number retention. In addition, the condition of the piston and cylinder liner wall was similar across the test and reference units. 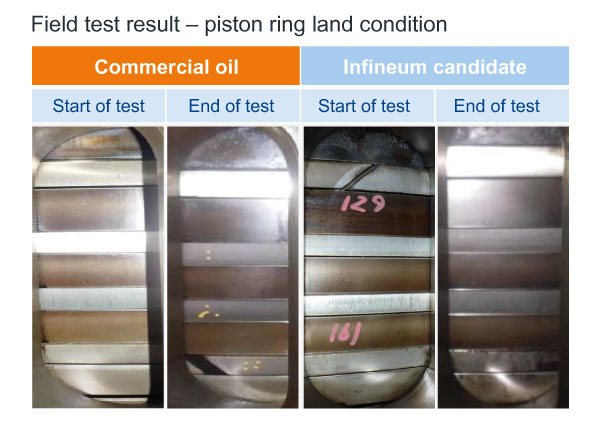 The field trial confirms that using low treat rates of an advanced thickener can deliver comparable performance to a commercial MDCL blended with bright stock.

The results obtained from the field trial have been validated by the OEM and a ‘Letter of no Objection’ has been obtained for the Infineum thickener.

Following on from this successful research project, Infineum is now progressing with the development of a thickener for use in TPEO applications.