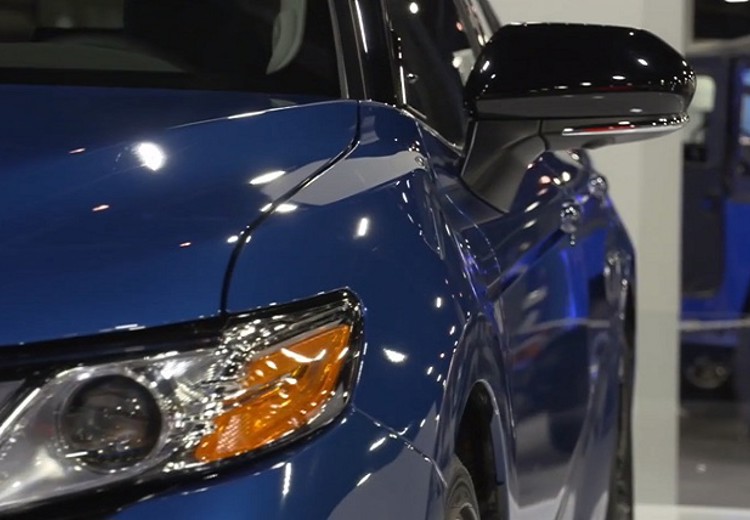 This year Infineum attended the Atlanta International Auto Show to witness the latest market developments for passenger cars. With sales figures suffering, manufacturers are doing all they can to promote the latest technology and turn heads at the show. In this video we summarise the highlights: Ford to Toyota, gasoline to electric powertrains, sports cars to the latest SUVs. Join us and take a look into the future of passenger cars.

This year Infineum attended the Atlanta International Auto Show to witness the latest market developments for passenger cars. Car manufactures are eager to woo customers with advanced technology, from enhanced power trains, with varying degrees of electrification, driver assistance aids, vehicle connectivity or simply more horsepower. With sales figures suffering, it’s fair to say manufacturers are doing all they can to help convince customers to pick up a new car.

This year’s auto show was notably for the emphasis placed on fully electric models. While GM had not yet launched its BEV3 platform, its focus for most consumers today is the Chevy Bolt. With a respectable 259 mile range and pricing starting under $40k before incentives, it’s gathering some market attention from those looking for a practical electric.

Ford has also made a big splash in the electric vehicle space with the introduction of the Mustang Mach E. This crossover seems to be a direct challenger to Tesla’s upcoming Model Y. With a 300 mile range, sub $40k pricing after incentives and outstanding performance specs, it could finally start to capture a larger market share away from electric car leader Tesla.

On the higher end segment of electrification, Porsche released its Taycan full electric. A performance oriented electric, it’s track capable and can do repeated 0-60 runs of 2.6 seconds and has an industry leading 270 kW charge rate. While pricing above $100k pushes it out of the reach of most consumers, this technology will become more commonplace in the future.

Telsa, the market share leader in Electric Vehicle penetration in North America and the globe, was not present here, but has been active with new models. While continuing to push growth of the lower priced Model 3, it’s introducing a crossover Model Y and planning range and performance upgrades for its flagship Model S. Tesla is also looking to break into the pick-up truck segment with the future release of the CyberTruck.

Most of the focus however on electrification is hybridization, still involving an internal combustion engine. From extreme performance hybrids like the Acura NSX, working to extract maximum performance from the fusion of gasoline and electricity to more mainstream hybrids making their way into more models, many were on display.

Toyota continues to grow the use of hybrids in nearly all of its models. From Camry to RAV4 to the plug in Prius Prime, they are seeing increasing popularity in model availability and sales. As battery capacity improves, it’s likely we will see more hybrids become plug-in hybrids allowing some range on all-electric.  Interestingly, many more of the Toyota engines being released in 2020 are now noting SAE 0W-16 as the preferred oil viscosity grade, driving growing interest in this low viscosity oil.

With increasing preference in North America for Crossovers, SUVs and light trucks, it’s also not a surprise to see more hybridisation of larger vehicles. Honda introduced a Hybrid CR-V, ideally suited to take advantage of this trend. Promising outstanding efficiency of 40 MPG in an electrifying drive, it is hoping to win over more customers.

At Lincoln, the newly introduced Aviator SUV is available as a plug in Hybrid with a powerful twin turbocharged V6 engine, touting that luxury has gone hybrid and available in a SUV.

However, not everything is about hybridization or electrification. Automakers still know that customer demand high performance pure gasoline vehicles with no range anxiety.

Chevy introduced its latest iteration of the iconic Corvette. After many years of rumors, the engine has finally moved from the front of the vehicle to a mid-engine design for better handling. Redesigned from the ground up, GM is promising the ultimate sports car experience. The V8 engine is capable of utilizing its 495 horses to propel you to its 194 mph top speed and hit 0-60 in less than 3 seconds.

Ford’s latest Shelby GT500 Mustang model, brings the mustang performance to even greater heights. With 760+ HP and 625 lb of torque, it’s the most powerful production car that ford has ever build! This vehicle technically makes more HP than the Ford GT supercar which makes 647 HP and is a proper race car.

BMW and Toyota combined forces in the development of the Toyota Supra. The GR Supra’s 3.0 liter turbocharged engine gets a significant power bump for 2021. Responsive as ever, this updated engine is rated at an impressive 382 horsepower and 368 lb.-ft. of torque. Though not as aggressive on paper, but it’s finely engineered handling will make this a fun and very fast vehicle.

With Pickup trucks as popular as they are, the Ford Raptor continues to offer muscle car levels of performance in a pickup truck guise. Utilizing the same high output V6 block found in Ford performance car, it helps deliver a best in class 450 HP and 510 lb ft of Torque to both handle demanding tows and as well as be fast off the line!

Leaving the auto show while seeing this 1971 classic mustang with it’s impressive in its time, 210 HP, we’re reminded how much the auto industry has evolved and will continue to evolve. Looking at this Mustang brand now, we see it that same iconic brand visible as a fully electric crossover and a 760 HP performance benchmark! We’re happy to help be your guide to lead you though these development and thanks for joining Infineum Trends at the auto show in 2020!

Fly through a Heavy-Duty engine