Expectations that transmission fluids should contribute to fuel economy performance is not a new concept but Joe Noles, Infineum Transmission Fluids Technical Advisor, explains how mapping the response of hardware to viscosity changes and additive technology can yield significant improvements.

But, right now, in the light-duty market, by far the biggest driver for transmission hardware evolution is improved fuel economy as OEMs work to meet ever-tightening fuel economy mandates and targets.

We are seeing a real diversification in transmission technology as OEMs take different approaches to improving fuel economy.

One approach, adopted by a number of OEMs, is to increase the number of gears in conventional stepped automatic transmissions. While six speed transmissions have been the workhorse for many OEMs some are now moving to eight, nine and ten speeds. Other approaches include continuously variable, dual clutch, and hybrid technologies. The uptake of these systems varies from region to region, and amongst other factors, their popularity typically reflects the driving profile of each region. 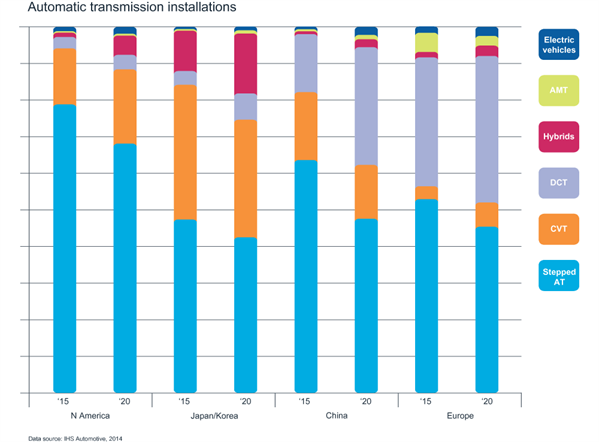 Clearly with such a wide range of available hardware, the careful tailoring of transmission fluids for each OEM and each specific application is increasingly important.

Today automatic transmission fluids (ATFs) are increasingly expected to have a direct impact on fuel economy performance. ATF fluid viscosity for example has a direct effect on pumping, drag, and churning losses. And, with the oil pump thought to account for about 50% of the energy lost in the transmission, these sources of inefficiency cannot be underestimated or ignored. In addition ATF viscosity and boundary film chemistries can have a direct effect on gear and bearing efficiency.

To gain the most fuel efficiency, the new formulation trend is for transmission fluids to have lower and lower viscosities over a wider range of operating conditions.

A number of OEMs have moved from conventional viscosity fluids of more than 6.8 centistokes at 100oC to low viscosity - typically 5.5 centistoke fluids - for their automatic transmissions. But, we are already seeing 4.5 centistoke fluids in use, and there may be a demand to move to even lower viscosities in the future.

While it is possible to get more fuel economy from transmission fluids, far more than lowering viscosity at 100oC is involved – low temperature viscosity is also critical. In addition, because there is more tendency for mixed and boundary lubrication as viscosity is lowered, gear and bearing losses can also increase. However, from our research it is clear that the careful selection of friction modifier and film former additives, combined with the most appropriate base stock can reduce these losses.

Our evaluation involves the use of a variety of bench screener tests, which are used to assess the initial impact of additive changes. Once the best candidate oils have been selected, these are tested further in transmission hardware test beds and ultimately in vehicles in real-world conditions.

This level of testing enables Infineum to assess future ATFs under a variety of conditions, including a wide range of oil sump temperatures and torques. In our view this is increasingly essential as formulations are optimised to meet the specific requirements of individual OEM transmission designs.

In a recent test programme, Infineum formulated three test ATFs with different viscosities by combining a selection of base oils, viscosity modifiers, and viscosity building additives.

Once this had been achieved bench and screener tests were used to evaluate bearing and gear efficiency against a factory fill reference oil. This allowed the additive package to be tailored to ensure the optimum combination of viscosity and efficiency so that maximum fuel economy performance could be delivered.

The final phase of the test programme assessed the fuel economy gains using the Federal Test Procedure (FTP) and field tests. In the FTP 75 Chassis Dynamometer Test all three oils demonstrated improvements in fuel economy from between 0.6% for fluid A to 2.3% for fluid C over the factory fill reference. These fuel economy performance improvements were subsequently verified in 35,000 miles of on-road testing. 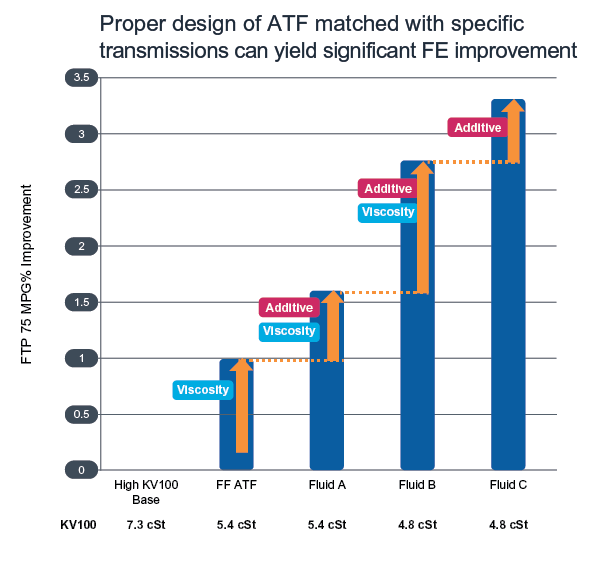 This extensive bench, test bed and field testing programme has clearly demonstrated that the proper design of an automatic transmission fluid matched with a specific transmission design can yield significant fuel economy improvements.

In the future we expect formulation challenges to come in the form of further requirements for improved durability, longer drain interval, and fuel economy in increasingly complex transmission hardware. This will put even more stress on the fluid and result in the development of even higher performing ATFs.

In our view the formulation landscape is becoming increasingly complex, and the co-engineering of the lubricant and hardware is increasingly essential to ensure we strike the right balance between fuel economy gains and friction durability to deliver continued hardware protection.