The journey from API CF to CH-4 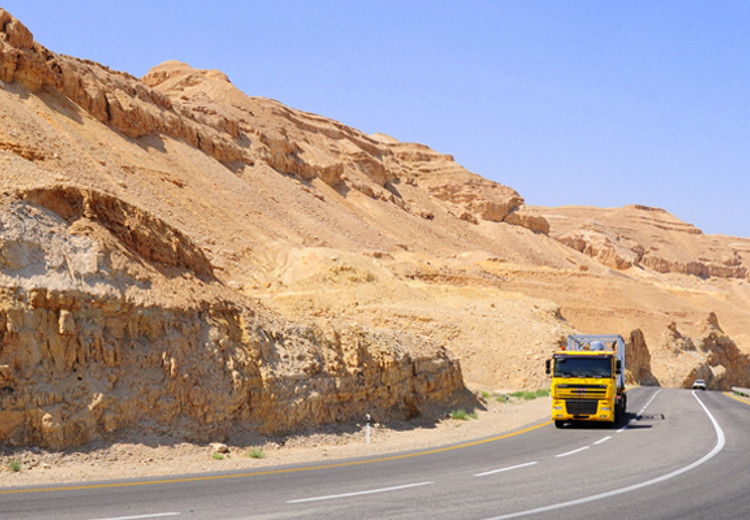 The Middle East is getting ready to implement a significant quality upgrade for heavy-duty diesel lubricants. Infineum Senior Technologist, Ahmad Zareh, looks at the challenges and opportunities this represents for lubricant marketers in the region.

The current picture for heavy-duty diesel (HDD) lubricant quality and compliance across the Middle East is fairly complex. In 2007, API CH-4 was specified as the minimum performance level for domestic use in the Gulf Cooperation Council (GCC), a political and economic alliance of six Middle Eastern countries - The Kingdom of Saudi Arabia (KSA), Kuwait, the United Arab Emirates, Qatar, Bahrain, and Oman. However, there is a wide variation in the extent to which API CH-4 is being implemented as a minimum quality level.

It looks likely that the most stringent enforcement will be in the GCC. In KSA, the largest GCC market, API CH-4 is expected to become mandatory in 2017. Here, the current HDD lubricant market is dominated by monogrades, and API CF quality levels still hold more than a 50% market share.

The API CF and CH-4 performance categories were designed to meet specific, and quite different, requirements. API CF was introduced for the service typical of indirect injection diesel engines, mostly used in off-road applications such as mining and construction. These engines use a broad range of fuel types, including fuel with higher sulphur levels. The basic performance criteria for these oils were piston deposit, wear and bearing corrosion control.

The API CH-4 oil category was introduced for use in high speed four-stroke diesel engines meeting 1998 exhaust emission limits, using fuel with sulphur levels of up to 0.5%. These oils offer several additional performance attributes compared to API CF, including:

The use of oils with poor oxidation control and inadequate dispersancy can lead to the formation of deposits in the engine. Deposits can block oil feed pipes, starving the engine of lubricant, which results in a rapid increase in wear, particularly of the valve train.

Impact of dispersancy and oxidation control on engine cleanliness

To claim API CH-4 performance category all the engine and bench tests required by the specification must be run and passed, testing must comply with the requirements of API’s Engine Oil Licensing and Certification System (EOLCS, API 1509). To change viscosity grade or base oil, API Viscosity Grade Read Across (VGRA) and Base Oil Interchange (BOI) Guidelines must be followed.

HDD OEMs are looking for better engine protection while, at the same time, extending oil drain intervals to cut cost of ownership. This combined with the fact that oils do not need to be changed due to seasonal and ambient conditions, means many OEMs no longer approve monograde oils.

Additionally, oil and additive companies are generally conducting API CH-4 engine test programmes in multigrade oils. In most cases the data generated in multigrade oils does not read across to monogrades, which means additional engine tests are required to qualify monograde formulations, adding significant cost to their development.

These trends mean that in the future, as the market shifts from API CF to higher quality API CH-4, we can also expect most monogrades to migrate to SAE 15W-40, or lower, viscosity grades.

Base stock options and key properties

However, irrespective of which base stock groups are used, the properties of the base oil mix is key, and will have an impact on the performance of the finished lubricant – particularly in terms of their saturates, sulphur content, viscosity index (VI) and volatility. 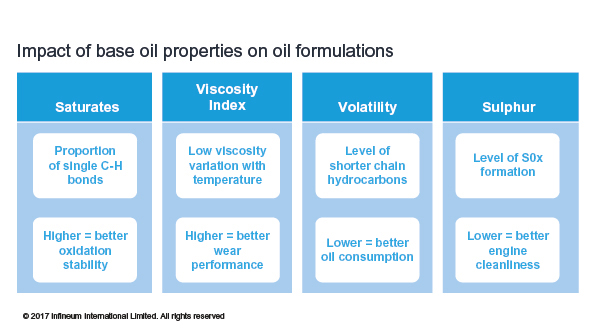 Based on the classification of base stocks, Group II and III base stocks generally have higher saturates but lower sulphur and volatility compared to Group Is. Additionally Group III offers higher VI.

API CH-4 oils can be formulated using various base stock groups and combinations. Careful base stock selection is critical because, as mentioned above, it impacts the performance of the finished lubricant.

By formulating with Group II base stocks only, higher saturates and lower sulphur levels can be achieved compared to using a combination of Group I with 10% or 30% Group III. These levels of Group III are set respectively for ACEA and API BOI guidelines with limited or no additional engine testing.

To demonstrate the improved performance of Group II over Group I base stocks, formulations were tested in the Sequence IIIG test.

In the Sequence IIIG test, the Group II formulations performed much better in terms of controlling viscosity increase due to oil oxidation, and with regards to protecting the cam and lifter against wear. These performance differences relate to base oil saturates content and to the higher VI of Group II base stocks.

Group II-based oils also performed better than Group Is in the Daimler oxidation test - a key test used for lubricant approvals in the Daimler oil specification. This improvement is related to the properties of Group II base stock.

Over the next few years there is expected to be a significant performance upgrade to HDD lubricants in the Middle East, particularly within the GCC, as formulations move from API CF to API CH-4. This will also drive a shift from monogrades to SAE 15W-40 and other multigrade oils, if the expensive and bespoke development required for monogrades is to be avoided.

The upgrade to API CH-4 opens the door for real formulation flexibility in terms of base stock choice.

However, in tests carried out by Infineum, Group II base stocks have been able to deliver significant performance benefits compared to Group I and Group I + III combinations.

As quality levels rise, the potential to supply robust, long-drain lubricants for Middle East HDD applications is an exciting opportunity. Lubricant marketers need to combine careful base stock selection with advanced additive technologies to be confident that they can continue to deliver the required level of hardware protection over extended drain intervals.