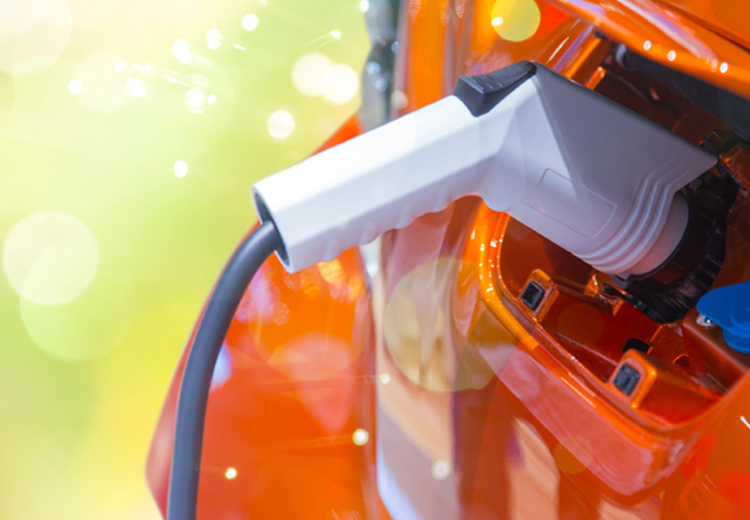 As governments around the globe take tough measures to cut CO2 emissions, OEMs are exploring a wide range of technologies to ensure their vehicle fleets comply. Insight Editor, Rose Gill, talks to Al Bedwell, Global Powertrain Director at LMC Automotive, about his views on the key trends in the world of vehicle electrification.

After more than a decade of sales, electric vehicles, in all their different forms, still account for only a small proportion of global passenger car vehicles sales. Japan is the exception, where in a nation that has embraced electrification, almost one third of sales are hybrids. However, global forecasting and market intelligence company, LMC Automotive, sees the electrification rate rising, with 2017 world volumes up by 750,000 units. “While, hybrids, including plug in hybrid electric vehicles (PHEV), account for the largest share of electric sales,” Al explains, “the strongest growth was in full battery electric vehicles (BEV) – which were up 74% in 2017.” 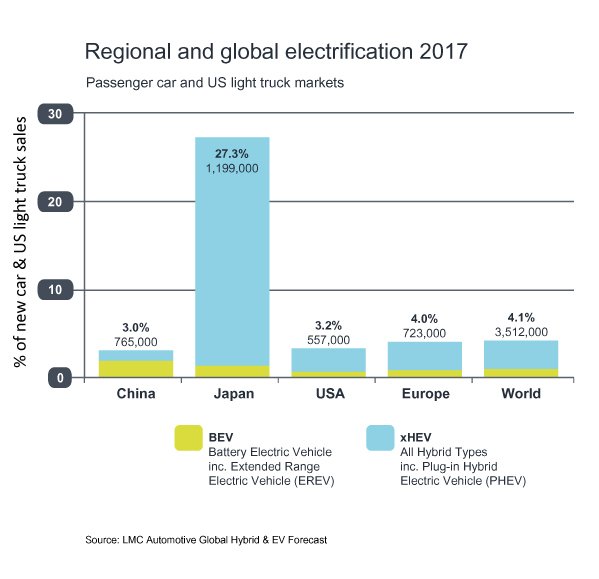 However, with global passenger car sales topping 94 million in 2017, this still only represents a very small uptake of these technologies.

Electrification of the vehicle fleet

Looking at the developed markets, LMC Automotive sees Europe moving to electrified technologies faster than for example the US, where low oil prices combined with a lack of incentives outside the CARB States mean sales forecasts of hybrid and EVs remain low. “At LMC, we expect to see something in the order of three million electrified vehicles in the US by 2027, with the majority being hybrid.”

In Europe, the uptake of electrification is being driven by the tough fuel economy standards and the generally better incentives available.

We are seeing a growth in political aspiration in Europe for the removal of vehicles powered solely by conventional internal combustion engines (ICE).

“The UK and France, for example, have plans to ban ICE-only sales by 2040 while Norway and the Netherlands have even earlier implementation dates, while the US, as yet, has no federal targets,” Al confirms.

Another trend in Europe is the shift away from diesel vehicles following 'Dieselgate'. “What we are seeing here is that electrification is not really benefiting from the decline in diesel, with most sales going to pure gasoline – with just a 2% increase in the share of full hybrids since 2015. I think the most unexpected trend is that European car buyers, despite the fuel economy penalty, keep choosing sports utility and crossover models."

“Now,” Al continues, “what we are seeing is that this decline in diesel share and shift to less fuel efficient body styles is resulting in a slowdown, or even reversal, in the fleet CO2 reduction rate. In our view, this will be a real problem for both the OEMs and for policymakers."

As diesel continues to decline in the coming years and both the general public and OEMs become increasingly reluctant to invest in diesel, more new technology will be needed to keep CO2 on a downward trajectory.

Current EU legislation states that by 2021 the fleet average CO2 emissions to be achieved by all new cars is 95g CO2/km. However, new regulations have already been announced, which mean average emissions of the fleet of new cars in 2030 will have to be 30% lower than in 2021. “We expect targets on zero and low emission vehicle sales to follow,” Al suggests, “which will be backed by significant investment in charging infrastructure and battery production. But, the real issue here is ensuring the public will buy these lower emission models and, in my view, incentives to mitigate the higher cost of the vehicle will be crucial to the success of electrified vehicle sales in Europe.”

With the range of BEV reaching 350 km, and a dramatic increase in the number of fast charging points in Europe, LMC Automotive says OEMs are racing to meet anticipated demand. “We have seen announcements from most OEMs on the pace and extent of fleet electrification. Most are introducing some form of electrification to current models and some are introducing BEVs. VW, for example, says it will have at least one electrified version of all models by 2030 and says it plans to have 50 BEV models by 2025, while Volvo has announced it will sell no ICE-only vehicles by 2024.”

However, Al still sees this as a trickle rather than a flood. “When you look across all the OEM statements, I think we are likely to see a minimum of 100 new BEVs by 2025, and I expect SUVs to be well represented here. Looking out to 2027, we at LMC Automotive expect 16% of new car sales to be BEVs, while a new generation of 48V mild-hybrids, that still contain an ICE, will start to achieve real volume growth – reaching 32% of new sales by 2027.”

What do these trends mean for conventional gasoline and diesel vehicles? “In my view,” Al continues, “vehicles powered solely by internal combustion engines will disappear before 2040 – diesel faster than gasoline. However, this does not spell the end of the ICE."

Our estimations suggest that the growth in mild-hybrid sales mean 50% of new cars sold in 2040 will still be partially powered by diesel, gasoline or natural gas.

In most regions, the norm is for hybrid sales to outstrip BEV, although China is proving to be an exception. LMC Automotive says that in China BEVs account for more than 50% of electric sales. “Driven by China’s New Energy Vehicle (NEV) mandate, finalised in September 2017, and the ‘gold rush’ from local OEMs, China has been pushed into a dominant position here - accounting for 65% of global BEV sales in 2017. In my view, we can expect many more players to enter the China BEV market in the coming years.”

Looking ahead, Al says he expects China’s NEV quotas to push OEM investment in electric vehicles. “The ‘cap and trade’ scheme that will be enforced form 2019 means any OEM selling more than 300,000 cars will have to achieve an NEV score of 10, buy credits or face fines. I think this policy will result in strong BEV sales growth in the region, which will be dominated by Chinese brands.” 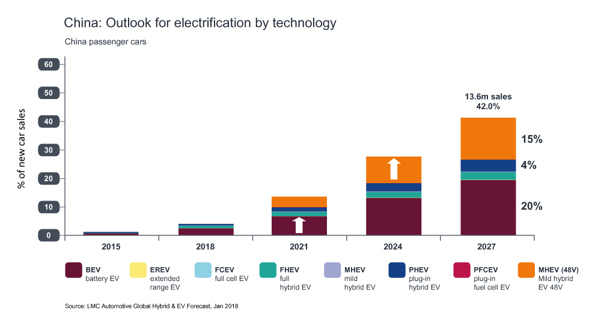 In the future, China is expected to still have the world’s largest BEV sales, which LMC Automotive suggests may exceed six million in 2027 – representing a 20% share of new car sales.

But, as Al explains, it’s unlikely that BEVs will top the global sales tables any time soon. Even out to 2027, LMC expects only one third of the global light-duty market to be electrified, with BEV accounting for some 10 to 15 million units worldwide. “First, I think there is a long way to go in terms of battery technology development to meet the energy density requirements before BEVs become the norm. In addition, although urban air quality is a clear driver for BEVs, unless the electricity used is from a ‘clean’ source their benefit in terms of climate change is up for discussion."

It really does come down to the consumer to embrace this new technology and I’m not convinced people will buy BEVs simply because they have zero tailpipe emissions.

“At LMC,” he concludes, “we have seen continued resistance to new technologies that deliver less of what end-users want and yet cost more to purchase. Without strong government incentives, I can’t see BEVs holding more than a niche of the future passenger car market for many years to come.”

Footnote: There are many opinions about the uncertain future of vehicle electrification, Infineum considers the full range of external insights to develop its future scenarios.