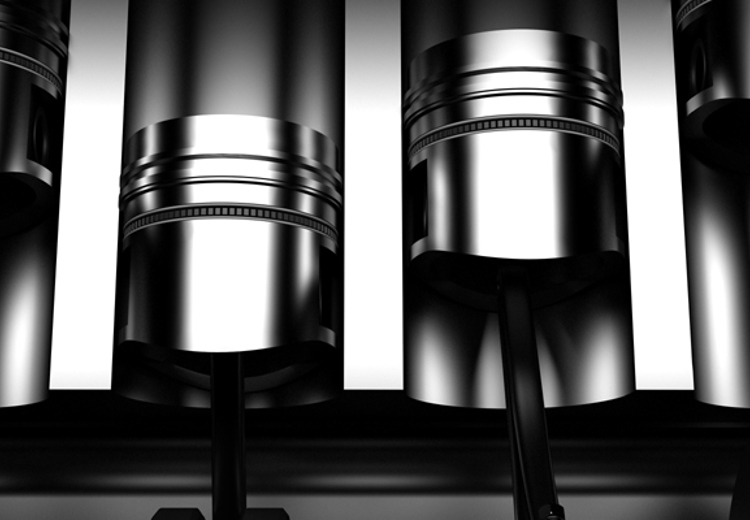 To improve vehicle fuel consumption the automotive industry has been working to reduce engine friction losses for a number of years. A key area of focus has been the piston rings and the piston since these represent around 50% of total engine friction losses. Work to date has concentrated on reducing the piston system friction by introducing design changes, using low friction coatings, improving bore surface finish and formulating advanced lubricants.

The novel, synergic effect of some specific combinations of coatings and lubricant additives – known as ‘superlubricity’ – is being explored as a new way to reduce friction.

Structural superlubricity is the state in which two contacting surfaces slide with no resistance within a measurement error of < 0.01 coefficient of friction (CoF). While a CoF as low as 0.02 has already been obtained with real engine parts it has not been achieved using a fully formulated oil. Infineum and Mahle have undertaken a study that aims to achieve real-world superlubricity, which means significant friction reduction (≤ 0.04 CoF) using fully formulated engine lubricants between real engine parts

Hydrogen-free DLC and PVDC coatings were evaluated for the rings and the liners, all of which were cut from actual pieces in production. A reciprocating test was used to evaluate the CoF at a variety of loads and temperatures.

For each ring/liner/oil, at least three replications were tested according to the procedure below:

After the test, the ring/liner was cleaned, wear was measured and selected ring/liner pairs were analysed for tribofilm identification.

The two test oils showed very different CoF responses in the friction and wear sequences for the PVDC and DLC coating types. Oil A did not achieve superlubricity, maintaining CoF~0.13 along the test sequences with the PVDC, while for the DLC coating CoF increased from ~0.07 at test start to 0.12-0.13 at test end. Oil B showed a remarkable friction decrease with the PVDC ring, achieving superlubricity at 130oC. However, for Oil B, the DLC coating was almost insensitive to speed and load increases. 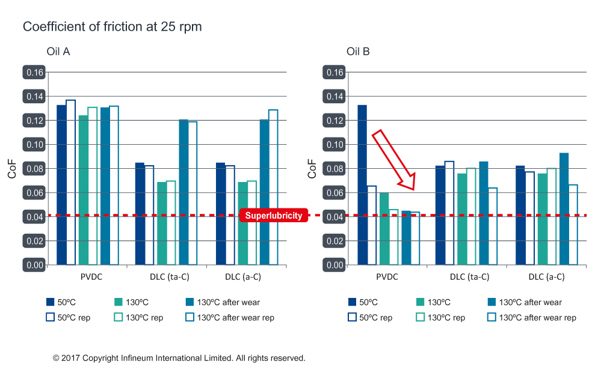 Oil B achieved superlubricity with the PVDC ring Enlarge view

The rings and liner pairs were then measured for wear. Here, the pairs with the lowest friction results showed less wear. Of particular interest was that while for the baseline Oil A the DLC coatings presented lower wear than the PVDC, the opposite was seen for the Japanese Oil B.

In addition, when looking at the liner surface after the tests, Oil B caused lower liner wear, especially for the PVDC coated ring, where a brownish tribofilm could also be seen.

To investigate tribo-chemical mechanisms that may have caused the different behaviour of the coatings to the two oils, detailed surface characterisation of selected ring/liners including X-ray photoelectron spectroscopy and Scanning Transmission Electron Microscopy with Energy Dispersive Spectroscopy (STEM-EDS) were used.

Unusually, little tribofilm was observed on the DLC surface compared to the PVDC. In addition, differences were observed between the two coatings, which could help to explain how lower friction was obtained with the PVDC than with DLC.

Following these initial results, which demonstrated that, with the Japanese fuel economy oil, PVDC showed less wear and friction than H-free DLC, further testing was performed. Three experimental, fully-formulated SAE 0W-20 oils were used to investigate the literature hypothesis that superlubricity is achieved with a combination of organic friction modifier (OFM) and DLC.

To better investigate the tribofilm effects, friction at 50°C and the wear sequence were removed from the test procedure. As occurred in the previous test, the DLC coating was almost insensitive to the lubricant variants and to speed increase. However, the PVDC ring, when tested with the oils containing OFM, showed slight friction reduction with speed but much more significant friction reduction was observed with the oil containing molybdenum.

Although superlubricity values were not achieved, the results suggest that molybdenum, rather than OFM additives would be necessary to attain the required CoF reduction. The results also indicate that PVDC benefits more from the use of lubricant additives than DLC. 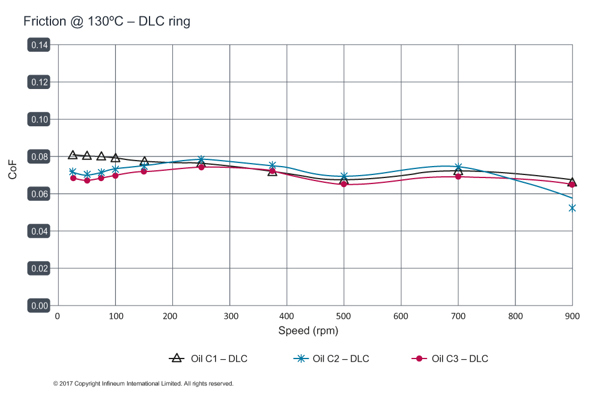 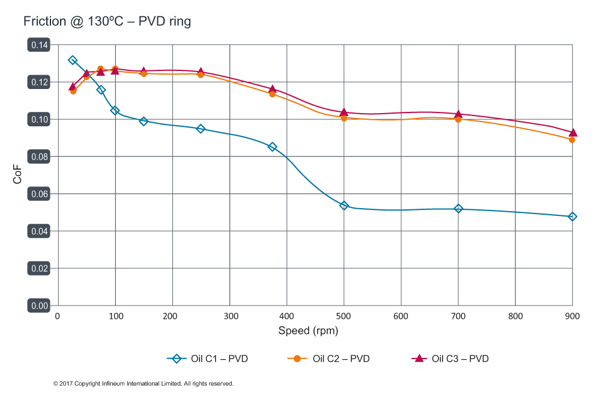 The impact of molybdenum

To test the theory that molybdenum is necessary to produce superlubricity, three new SAE 0W-20 lubricant formulations with high molybdenum were fully formulated with a careful mixture of all the necessary componentry.

All three formulations were able to achieve CoF of ~0.04 (superlubricity) under boundary conditions with the PVDC rings. As with all the other tested oils, DLC friction remained similar to the baseline oil. To assure repeatable conditions, Oils A and B were tested again together with the three new experimental formulations. On this test round, the Oil B - DLC ring pair confirmed the friction increase with wear trend observed in the 1st tests.

In terms of wear, although it was still higher for DLC (and in the paired liner) than for the PVDC with oils containing molybdenum, the three new formulations were able to mitigate the ring wear compared to the commercial Oil B. 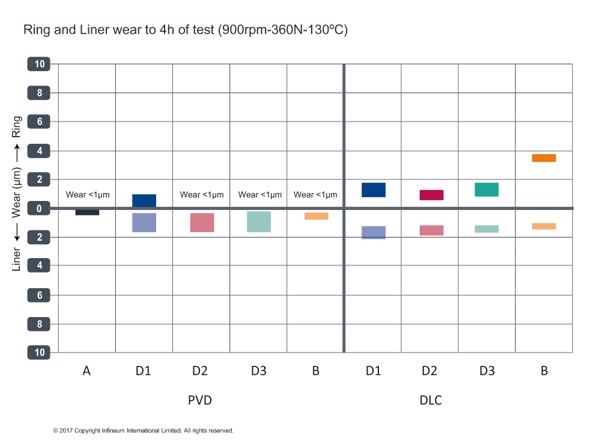 The work undertaken has demonstrated that real-world superlubricity (low friction values of ≤0.04 CoF) can be obtained between a PVDC coated piston ring and a cylinder liner in reciprocating motion with high molybdenum containing oils. In addition, when superlubricity occurred, both ring and liner wear were reduced. However, high molybdenum containing oils caused increased wear on DLC coatings, which can be mitigated with the correct lubricant formulation.

By carefully balancing the additive components in lubricant formulations superlubricity can be achieved in real-world conditions with fully formulated SAE 0W-20 oils.

Taking advantage of the synergic effects of specific combinations of coatings and lubricant additives it is possible to gain fuel economy benefits by reducing engine friction losses while maintaining wear protection.