The effects of additive components and lubricant composition

As OEMs downsize and turbocharge their direct injection gasoline engines to improve fuel efficiency and reduce emissions, low-speed pre-ignition is becoming more of an issue. In this third feature of our low-speed pre-ignition series, Anne Young, Infineum Lubricants Development Technologist, discusses some of the findings from research presented in a recent SAE paper.

Market demand and tightening global legislation mean OEMs must improve vehicle fuel consumption and reduce CO2 emissions. One strategy being introduced is the downsizing of direct injection gasoline engines. However, this requires increased boost pressures to maintain power, which can create an abnormal combustion event known as low-speed pre-ignition (LSPI). Infineum has invested in a significant R&D programme to fundamentally understand the phenomenon.

Initial assessments focused on developing a better statistical approach to measure and quantify LSPI activity [read more here] and looked at data collection and analysis [read more here]. In this third part of the series, the data analysis techniques have been applied to provide a statistical analysis of the effects of calcium and magnesium detergents on LSPI, as well as the responses of the other key components and parameters in modern lubricants.

The study used the GM 2.0L Ecotec LHU engine, with all LSPI and/or knock suppression strategies disabled to prevent them from impacting the data in the presence of significant LSPI promoters. And, because fuel composition has been shown to have a significant impact on LSPI activity, all studies used an industry standard Haltermann EEE fuel. This enabled them to focus on measuring lubricant related LSPI effects without introducing additional fuel related variables.

The first study examined the impact of calcium level on LSPI, which has previously been reported as an LSPI promoter. The average number of LSPI events was recorded for different concentrations of calcium, corresponding to the range of calcium sulphonate in current commercial lubricant formulations. No other detergent was present in the test oils. 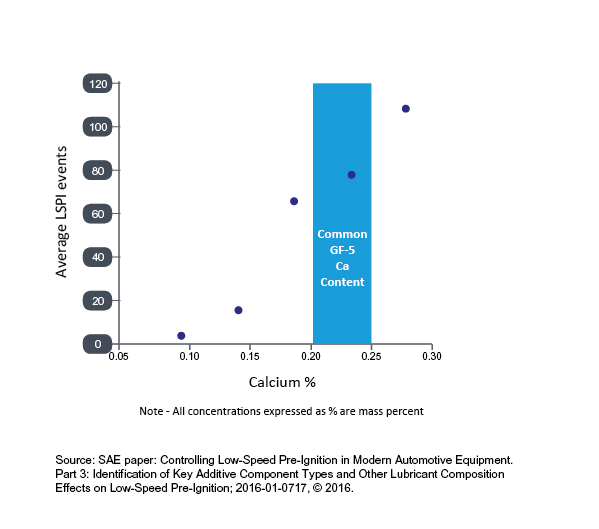 Effect of increasing concentrations of calcium on LSPI

A direct relationship was observed between calcium concentration and the average number of LSPI events, confirming calcium as an LSPI promoter.

The impact of different types of detergents was also examined. There was no statistical difference between salicylate, phenate and sulphonate or between two different types of alkylate backbones on LSPI behaviour. This confirms calcium as a promoter, regardless of chemistry.

The second study focused on the impact of magnesium-based detergents on LSPI. In contrast to the effect of calcium, varying the concentration of magnesium had little effect on the occurrence of LSPI, which means magnesium could be either neutral or a quencher. A logical next step was to investigate the influence of mixtures of calcium and magnesium on LSPI, to assess if magnesium can act as a quencher. In these tests, magnesium did not quench calcium-induced LSPI, confirming it as LSPI neutral.

The next test assessed a formulation containing a mixture of 0.159% calcium and 0.042% sodium. Here the mixture almost doubled the LSPI activity when compared to the effect of calcium alone. This implies that sodium is a more aggressive LSPI promoter in the presence of calcium.

ZDDP confirmed as an LSPI quencher

The most widely reported LSPI quencher additive type is zinc dialkyl dithiophosphate (ZDDP). However, the phosphorus constraints imposed in lubricant specifications to protect three-way catalyst (TWC) equipment make it unrealistic to use high levels of ZDDP to reduce LSPI.

Infineum increased the phosphorus level from 0.05% to 0.19% in the test oil. ZDDP has an exponential decrease in LSPI activity - higher levels of ZDDP reduced over 90% of LSPI events compared to the number that occurred with the 0.05% ZDDP oil, confirming ZDDP as an LSPI quencher. 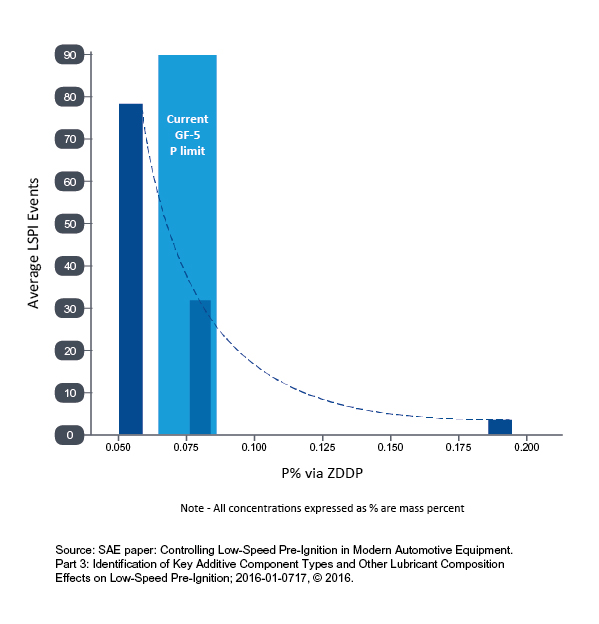 Further evaluation of ZDDP, looking at different alkyl length groups at fixed phosphorus levels, did not reveal statistically significant effects, confirming ZDDP to be a quencher regardless of chemistry.

These observations open up the debate for increasing the phosphorus maximum levels in the next generation of Industry and OEM lubricant specifications.

However, this would rely on the lubricant's ability to maintain phosphorus retention characteristics to ensure continued TWC protection or on OEMs being open to increasing the phosphorus content of future lubricants to enable better LSPI control.

Antioxidants have been proposed as LSPI quenchers. However, none of the common antioxidants (alkylated diphenylamines, hindered alkyl phenols and sulphurised esters) tested in this study made a statistically significant difference to the number of LSPI events.

Other formulation variables, including viscosity modifier (VM) type and SAE viscosity grade, were also assessed. No statistically significant difference could be observed between Star and OCP VM types on LSPI, which means they can be classified as LSPI neutral in this study.

Three different viscosity grades - SAE 0W-16, 0W-30 and 10W-30 - were tested and although directionally a trend of decreasing LSPI event count with increasing SAE viscosity grade was seen, the differences were not statistically significant. While simplistically it could be assumed that more viscous lubricants may reduce LSPI counts, for the viscosity grade range covered and number of tests performed, viscosity grade here is considered LSPI neutral.

Several LSPI prediction equations have been used in patents and publications, but there is no uniform trend with them, and many only focus on calcium, magnesium and phosphorus.

LSPI prediction equations may provide some basic guidance on the relative LSPI count for test formulations, but there are a number of reasons why they should not be used to predict lubricant performance in the field.

First, fuel quality and specific equipment type will have a significant influence on the relevance of these equations to a specific field situation. In addition, the equations presented to date do not cover the full range of LSPI quenchers and promoters currently used in commercial fluids, such as sodium, which may result in the expected LSPI event count being underestimated.

The concern about the negative effect of calcium ash on LSPI events could surface in future OEM and Industry specifications as new chemical limits. This might even include a limit on total sulphated ash levels or individual sodium, calcium and magnesium levels. In our view, the simplistic approach of applying an upper sulphated ash limit is not advisable since it would restrict the level of beneficial chemistries, such as magnesium detergent, for no clear technical reason.

A meaningful engine test requirement for LSPI would seem to be the best approach to control the effects of engine oil composition on LSPI.

This would provide a level of assurance to OEMs and allow engines to operate in the most fuel efficient manner. In addition, by removing the need for new chemical limits, formulation flexibility would increase. This would allow formulators to use their full expertise and innovative capabilities to reduce, and ideally eliminate, LSPI events, while also providing the performance and hardware protection expected from a modern lubricant.

Note: During the preparation of this paper, an LSPI test method using a 2012 Ford 2.0L, EcoBoost, 4-cylinder engine had been progressing towards approval as an ASTM standard for inclusion in the upcoming ILSAC GF-6 specification. This provides a relevant tool for evaluating the LSPI protection properties of future lubricants and means the use of new restrictive chemical limits can be avoided.

Reprinted with Permission from SAE International

Visit the SAE website to view the paper here