New insights into the link between lubricants and combustion

Low-speed pre-ignition (LSPI), a form of abnormal combustion that can lead to destructive super-knock in downsized engines, is a serious concern for several OEMs. Insight explores the potential link between lubricant combustion properties and LSPI mechanisms.

LSPI is exacerbated in high power-density (downsized) engines and is a phenomenon that the automobile industry has been studying for more than a decade. But, paradoxically, although LSPI cannot be eliminated in an engine, its unpredictable nature makes it extremely difficult to reproduce in a controlled test engine.

Although several complex interactions have been identified, including engine technologies, operating conditions and fuel and lubricant properties, there is still no consensus on the mechanism(s) of LSPI. Previous Insight articles have examined the causes of LSPI and some of the impacts of additive components including detergents and antioxidants. The work covered in the recent UNITI conference was somewhat different, focusing on the combustion part of LSPI mechanisms. In order to understand the potential role of the lubricant, its auto-ignition propensity has been measured using a dedicated ignition quality tester device.

LSPI is an abnormal engine cycle observed at high loads and low engine speeds in turbocharged spark-ignited engines, most of the time with direct injection. LSPI involves three steps, all of which are based on a specific combustion process.

Step 1 - Pre-ignition caused by “hot spots” in the combustion chamber.
The source of pre-ignition is not totally known. Some R&D groups showed liquid fuel/lubricant droplets while others highlighted solid flaking deposits. This pre-ignition happens before the spark timing but, on its own, does not damage the engine.

Step 2 - Subsequent flame propagation.
This stage is similar to the flame propagation following a normal spark event in normal combustion and does not damage the engine. The issue here is that its timing is uncontrolled, which leads to extreme in-cylinder pressure and high temperature.

Step 3 - Induced super-knock in the unburnt fuel/air mixture.
Auto-ignition is very similar to well-known knock, but is much more severe because of the earlier (uncontrolled) combustion timing and the fact that a greater mass of unburned mixture is involved. 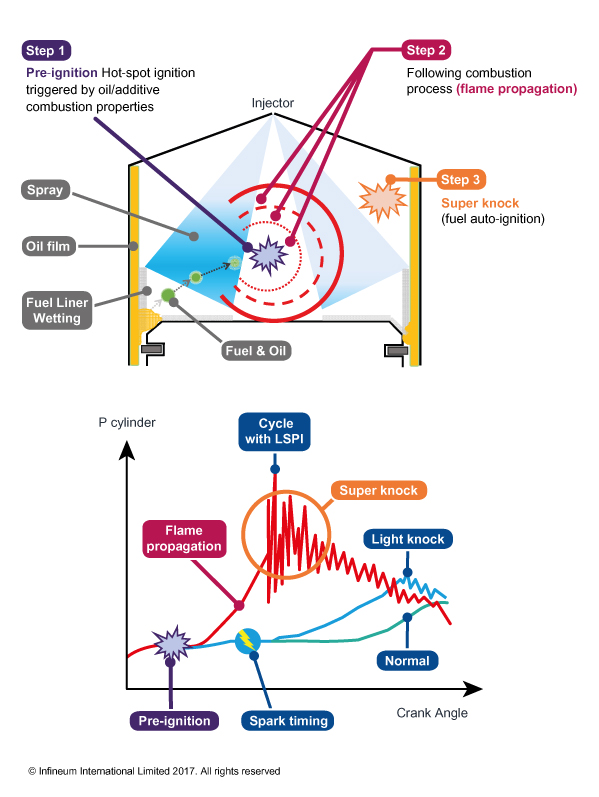 LSPI involves three steps, all of which are based on a specific combustion process

By following combustion theory1 it is possible to characterise the transition between safe flame propagation and destructive detonation in an engine. The complex diagram above mixes hot spot characteristics (depending on fuel/lubricant auto-ignition propensity), fuel combustion properties and the engine response through acoustic wave coupling. 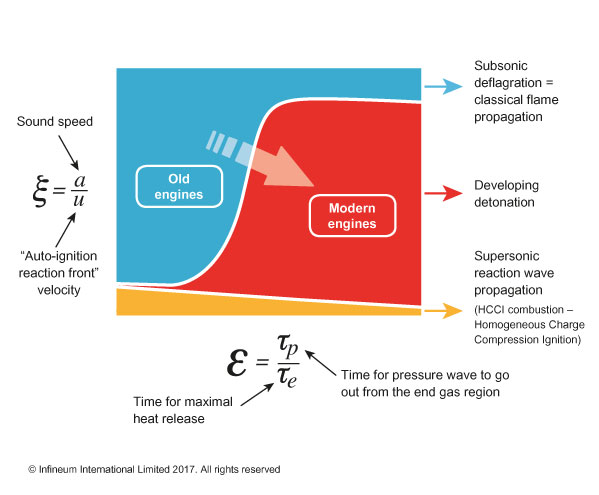 The diagram above emphasises the need to characterise the auto-ignition propensity of fuel/oil mixtures. An ignition quality tester (IQT), a device used for measuring diesel and aviation fuel auto-ignition, was adapted to undertake this work.

The IQT was used to measure absolute ignition delay time, in LSPI-engine-relevant conditions, and to capture a part of the physical-chemical coupling hypotheses responsible for LSPI. Hot-spots (step 1), created by the auto-ignition of lubricant/fuel mixture, were targeted. The IQT-measurement, which is based on an ASTM method (D6890), required several repeat tests.

For relevant fuel variability-free results, a gasoline surrogate was defined based on the emulation of auto-ignition and several key fuel properties2. The IQT showed that the addition of lubricant to the fuel significantly promotes auto-ignition.

Peroxide was mixed with oil in order to focus the IQT auto-ignition study on the branching and the propagation chain of the combustion process. This addition of peroxide increased the reactivity but again showed no sensitivity to calcium or magnesium content. These results seem to indicate that the calcium does not play a role either in the initiation or the branching chemistry reactions of the oil auto-ignition in the gaseous phase.

The largest impact on auto-ignition measured with the IQT came as a result of the general chemical composition of the base stock. In this test, different quality base stocks were added to the fuel samples. 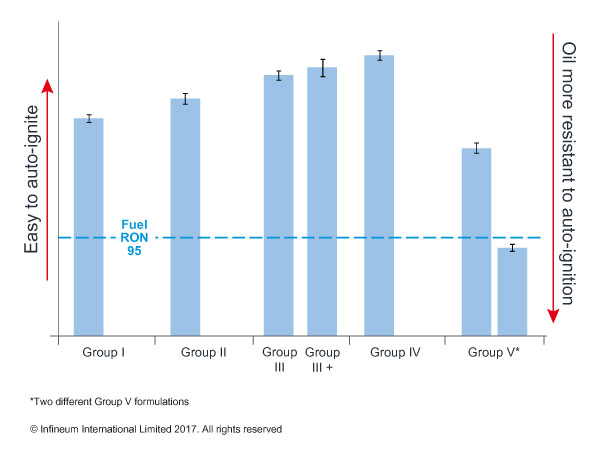 Base stock choice has a significant impact on auto-ignition

LSPI is an extremely complex phenomenon including multiple intricate couplings, combustion being only one of these elements. However, many questions remain unanswered, in particular why calcium has an LSPI-promoting effect while magnesium does not. Perhaps further modification of the IQT to allow solid-phase auto-ignition (auto-ignition catalysed by a solid deposit) may help to answer this question.

Meanwhile, this experiment has enabled us to better understand the role of the base stock in LSPI mechanisms. Depending on the specific engine operating conditions and the type of LSPI, base stock selection could be a significant factor in the formulation of LSPI-resistant lubricants.

I would like to thank the co-authors of this work from Princeton University: Dr Sang Hee Won, Prof. Frederick Dryer, Dr Francis Haas