Regulations curbing vehicle tailpipe emissions are being introduced and/or tightened the world over to help improve air quality. Insight looks at the automotive industry’s growing use of gasoline particulate filters as one method of compliance.

Although figures vary widely, recent data suggests that every year air pollution causes more than 5.5 million people to die prematurely worldwide. The main culprit is reported to be the emission of small particles from power plants, factories, vehicle exhausts and from the burning of coal and wood.

In vehicles, the small particles are largely made up from soot, which results from an imperfect mixture between the fuel and air prior to the combustion process. To a lesser extent, lubricant and fuel derived hydrocarbon residues can also form particles.

Regulations in several countries have been introduced to limit the emissions of these small particles from vehicle exhausts. In the European emissions standards, diesel vehicle particulate mass (PM) limits have tightened from 0.14 g/km in 1992 for Euro 1 to 0.005 g/km in Euro 5 and 6, which resulted in the deployment of diesel particulate filters (DPF).

Particulate emissions were not initially regulated for gasoline engines since conventional port fuel injection (PFI) engines do not emit a significant amount of particulates. However, gasoline direct injection (GDI) engines, have become a key technology - enabling CO2 emissions to be lowered while improving torque and power output. But, they are reported to emit more of the smaller more concerning particulates compared to conventional PFI engines.

Consequently, in 2009, the Euro 5 standard introduced PM limits for gasoline vehicles although, at this point, only diesel vehicles were regulated for particulate number (PN). For Euro 6, PN limits are being progressively phased in for gasoline engines, with the initial 6x1012 #/km value being replaced by 6×1011 #/km in Euro 6c for GDI engine, which took effect in September 2017.

While the latest GDI engines can achieve the lower PN limit in the conventional (NEDC or WLTC) regulatory test cycles, Euro 6c introduces a Real Driving Emissions (RDE) test procedure, which will include particle counting in a wide range of engine map operations. In addition, cars will not only be tested in controlled chassis dynamometer tests but also in real life conditions by using Portable Emission Measurement Systems. Whatever conditions are defined, RDE will introduce larger ranges of temperature, engine load and other variables.

In addition to European regulations, we are also seeing tough emissions limits coming into force in India and China.

DPFs have been used to cut particulate emissions from diesel vehicles for many years.

As particulate limits are extended to GDI vehicles, we can expect gasoline particulate filter (GPF) technology, which has been developed by building on the experience gained with DPF, to be used more widely in new vehicles.

GPFs look very similar to DPFs and, generally speaking, work in a similar way. The filter has a honeycomb structure, usually made from cordierite, a synthetic ceramic, with alternately sealed inlet and outlet channels. The exhaust gas is forced to flow through the porous filter substrate, which traps the soot. At about 200 to 350 channels per square inch, the canal density of the GPF is nearly the same as a DPF. The major difference between the two types of filter is that the porosity of the GPF is higher because the substrate is lighter. Although this allows the gas to move more easily across the substrate, it also means the GPF is more fragile than a DPF.

Generally, the GPF is integrated in the three-way catalyst (TWC) downstream of the normal substrate, which then becomes a four-way catalyst. An alternative is to keep a TWC close to the cylinder head and introduce a 2nd four-way catalyst under the flooring. 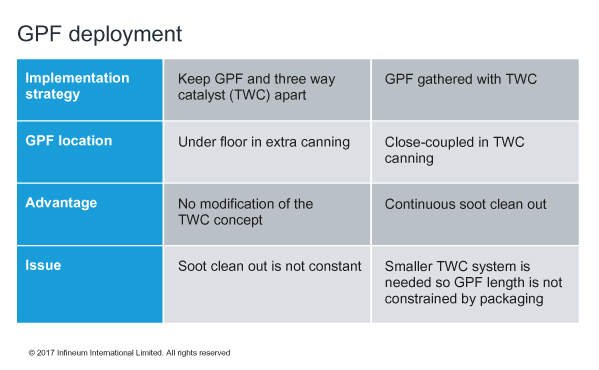 Particulate filters are very efficient - reported to be able to remove more than 90% of particle emissions. However, this efficiency presents a challenge. Over time, soot builds up in the filter which, if not removed, results in increased backpressure. The best way to remove the soot is by burning it off in-situ in the presence of oxygen and at temperatures >600oC; a process known as regeneration.

Unlike diesel engines, where oxygen is in excess, gasoline engines generally run at stoichiometric mixture, which means there is no oxygen in the exhaust to burn off the soot when the engine is under high load.

Consequently, for gasoline engines, regeneration can only be effective for non-power conditions and so is performed under deceleration, when the engine is being motored, which results in oxygen being pumped though the engine. Another major difference in gasoline engines is that the regeneration is passive, i.e. there is no need to purposely increase the exhaust temperature.

To initiate regeneration, the catalyst converter is fed with air for short periods. This oxygen, combined with high exhaust temperatures (400 - 700°C), leads to soot ignition. Where engines operate for long periods without deceleration, for example driving on a traffic-free motorway without any downhill slopes, engine control is required to initiate regeneration. In this case, the exhaust temperature is increased by delaying the spark timing and oxygen is made available by creating a lean fuel/air mixture.

A full DPF can contain around 8 grams of soot per litre (g/l) at which point active regeneration is needed. For the cordierite GPF substrate, the filter capacity is around 1 g/l. However, this small storage capacity is not really an issue since particulate emissions are some 10 to 30 times smaller in mass for GDI than for diesel engines and passive regeneration is very frequent.

GPF are increasingly being introduced to the vehicle line-ups of various OEMs.

Mercedes reports that GPF has been used successfully for more than two years in its S 500, where the architecture is a twin exhaust system with a two-way catalyst coupled with a GPF in each branch. Mercedes has also announced that in 2017 further S-Class variants, with the new M 256 and M 176 gasoline engines, will be equipped with this technology. The filter will then be gradually introduced in other new vehicle models, face-lifted models and new engine generations. Eventually, the OEM says it plans to use GPF in the current model series. The automaker reports it is investing a total of about three billion euros to ensure further improvements in fuel consumption and emissions – in both future and current vehicles.

In 2016 the Volkswagen Group announced that all Group direct injection TSI and TFSI engines would be fitted step-by-step with GPFs to reduce emissions of fine soot particles by up to 90%. The process started in June 2017 with the 1.4-litre TSI engine in the new Volkswagen Tiguan and the 2.0 TFSI in the Audi A5. Implementation is then following in further models and engine generations. By 2022, The Volkswagen Group says seven million of its vehicles could be equipped with this technology annually.

The PSA Group has also announced plans to include GPF in its direct injection gasoline vehicles. They report that their technology offers 75% higher efficiency in terms of the number of particles captured. Already available in the 1.2 litre, three-cylinder turbo PureTech gasoline engine, by the end of 2017, the automaker says the filter will be rolled out to all PSA Group direct injection gasoline engines, on both three-cylinder turbo engine families and four-cylinder models. PSA says these engines are being upgraded on this occasion to increase performance and output, and thus increase fuel economy even further.

Volvo has been reported to say it could introduce GPF to meet emissions targets, but it is also looking at increasing its use of electrification of the powertrain. The OEM says it sees electrification as a more cost-effective way of meeting legislative targets, especially as the price and performance of the components come down.

As OEMs test GPF aftertreatment systems in their engines, it remains to be seen if the technology will result in any changes to future industry and/or OEM lubricant specifications and engine tests.

It looks very likely that, as PN emissions limits are more widely introduced, GPF use will extend across vendors serving the European, Chinese and Indian markets.

Infineum is monitoring GPF introduction and maintaining a continuous dialogue with OEMs to assess the impact of lubricant formulation on GPF performance. We will share the outcomes in future Insight articles.