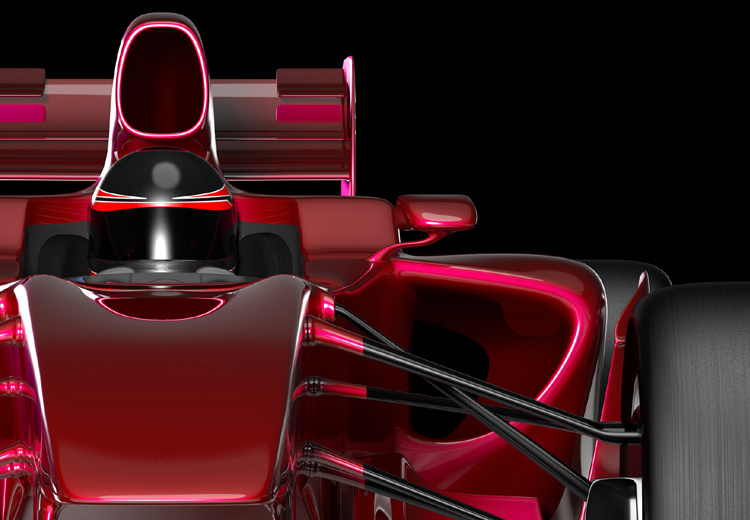 Mark Gallagher has had an exciting career, from the management board of Jordan Grand Prix and Red Bull Racing to Managing Director at the Cosworth Formula 1 engine company right through to his current consulting business with David Coulthard. Working with some of the biggest names in F1 motor racing, he has witnessed unprecedented change throughout his career.

The biggest changes Mark has seen to F1 vehicles and technology have been around improving vehicle safety and digitisation. “The first has resulted in far fewer accidents and is something of which the industry can be very proud. The second has enabled the industry to innovate virtually – removing the need to build entire cars to test at huge expense on the track before deciding whether to upgrade any components. We now develop our car in the virtual environment,” Mark explains. “We don't manufacture anything until we know it's going to do something useful. Thanks to this digital landscape, the efficiency of our operations, the speed with which technology is developed and the quality of the technology that we produce has dramatically improved. I would say that our industry has been on a 30 year data driven journey.”

The first 25 years of Formula One were about automotive technology. It was about making a car go faster. From about 1975 through to 2000, it was about embracing aeronautical engineering and aerodynamics and turning those cars into aeroplanes. And then the last 20 years have been about the third suite of technologies, which have all been around data and connectivity and doing something useful with that data. So it has transformed our quality. So for the first 50 years of Formula One, average reliability of a Formula One car was 55%, so 45% of the time cars just broke down. Reliability in Formula One today is in the high 90s per cent, so the cars just don't break down. That's because we have the data to better engineer our products in the first place.

Mark sees the future being about quality of outcomes based on available data, which relies on the ability to harness all of the connected technologies; and in this area he expects to see huge steps being made. Clearly, continued innovation in F1 is an essential element in being both competitive and successful. But, just how, in such a heavily regulated world is innovation managed and changed?

We work within an extremely regulated sector, so the rules and regulations are very tight. Lots of people complain about them because it seems to stifle innovation. And yet what you find is with the competitive teams, they have this inherent ability to look at the rules and to say, "Okay that's what we have to play with, now how can we innovate within that context." So they're questioning established ways of doing things, they’re also looking outside the industry at technologies, or systems, or processes that we can import that help us to innovate within our sector.

This innovation is continuing to shape the future, with 3D printing in manufacturing and artificial intelligence already bringing benefits to race day performance. While Mark says it is unlikely that they will ever completely 3D print an entire car, individual components can be printed at the race, while artificial intelligence is helping to improve the quality and speed of decision making.

Another key change to hardware in recent years has been the adoption of more energy efficient hybridised systems by the F1 OEMs. However, Mark says there has been an interesting and unexpected twist here.

The really interesting thing about that hybridised solution that we came up with, which was a small internal combustion engine and a big electric energy storage battery pack, and a control system, was that initially so many people thought that the cool stuff would happen around the electric aspect of the powertrain. It turns out that in the last six years, all the really big action has been on making that internal combustion engine super efficient, and achieving levels of thermal efficiency which were unheard of a decade ago.

So the hybridisation story in Formula One has been a really good case study in what happens when you take existing technologies and, rather than dispense with them, you refine them even further and you take yourselves onto a whole new level of efficient operation.

In terms of going full electric, Mark feels that the current performance of electric vehicle technologies is not yet ready to compete with the same speed and endurance as the advanced hybridised engine designs used in today’s F1 cars. Even with advancements planned for full battery electric race cars through programmes like Formula-E, hybrid solutions are likely to be more suitable in the medium term for providing the most competitive racing experiences.

“Will we end up with battery driven, electric vehicle technology in F1 in the long term? I don't really know, because I think there are still so many unknowns about ultimately where the world of transport will go. Discussions are underway in F1 with the car manufacturers about where they want to be in a decade's time. Is it battery technology? Is it a hydrogen fuel cell technology? Is it a combination of technologies into an even more complex, powertrain system? There is an opportunity for F1 to play a part in helping to develop some of those technologies, which is why we need to stay close to our colleagues in the automotive industry.”

Whatever the outcome, it is clear that the internal combustion engine is going to be an important part of F1 vehicle performance for some time to come. In such an aggressive operating environment, we were interested to explore how important the engine oil is to vehicle performance and just what is expected from the oils.

The product lifecycle of a Formula One engine has gone from about 400 kilometres to about 6,000 kilometres, so we need our lubricants to support the engine lasting 15 times longer than it did 20 years ago.

I think one of the hidden jewels of the Formula One engineering story is the huge strides that have been made in lubricant technology and fuel technology over the years, when you consider that an individual lubricant delivered for us can improve performance, power, torque, reliability, durability, we are constantly testing suites of lubricants for what they can achieve for us…….. And the interesting thing is there seems to be no end to it as we further refine products, so in 2019, we've seen huge performance improvement at Ferrari in Formula One and it's really interesting to see Ferrari attribute that to the quality of their partnership with their fuel and lubricant supplier. So here you are in 2019 with the world's most famous Formula One team saying, "Actually the biggest performance improvement we can make is actually with fuel and lubricants technology."

The million-dollar question for fuel and lubricant suppliers involved in the sport must be: can the learnings gained from F1 experiences be taken into conventional vehicle engineering? And, if the number of these companies involved is anything to go by, it seems very likely that the answer is yes.

Some of the biggest investments in Formula One come from the energy sector. So we have Shell, we have ExxonMobil, we have BP Castrol, we have Petronas, until recently we had Total, and there are others. And these energy companies are working with us in Formula One to try and develop products that are going to be road relevant and helping them to achieve their objectives with transport partners, and with society, and with legislation, and emissions, and all of those good things. So it's much more than just the automotive companies in Formula One. It's also working closely with the energy sector and they're a very important source of revenue for us.

Mark sees the track as an extreme R&D proving ground, somewhere to try things that could directly feed through to products for the general public or simply a place to develop products that demonstrate what might be possible in the future. “It's difficult to communicate how aggressive an environment F1 is,” he explains. “I've worked with a number of technology partners over the years who have come in with the best technology they can possibly come up with, and discovered that it just cannot live in the Formula 1 environment because these cars are being driven at phenomenal 350 kilometre per hour speeds for one hour 45 minutes. They experience huge temperatures, huge vibrations and huge fluctuations in conditions from a British summer at Silverstone, all the way through to 90% humidity and a 55 oC track surface temperature in Singapore. It is a very aggressive environment, and I think that represents a real opportunity for technology companies when they get involved in the sport because if they want to really show the world how good their technology is - frankly, if you can make it a win in Formula 1, that's a pretty good stamp of approval.”

Sustainability on the agenda

With sustainability high on the automotive industry’s agenda, it is interesting to see how F1, which for many years was seen as the sport of wastage, feels that it has a role to play in driving beneficial change. And, as Mark explains, this is not just in terms of reducing waste and finding more sustainable business models, it’s also about being more environmentally aware. For example, sustainability has been the driving force behind the adoption of the hybridised powertrain technology and one of the reasons F1 works so closely with fuel and lubricant companies to reduce emissions and extend product life.

Sustainability for us means taking a given amount of energy and making it go further and last longer. It means taking a given amount of resource of any kind, financial or material, and getting it to last as long as possible, and ultimately, well I think that there is a conversation to be had in Formula One about the extent to which we can create a circular economy in terms of the use of resources so that we become truly sustainable. And I think this is what has driven the very recent announcement by Formula One's shareholders and board of directors that by 2030, Formula One itself is going to be achieving a net zero carbon footprint through a whole range of initiatives. That's being done because we want to do it within the industry, and by the way, it's what our customers demand of us as well.

In Mark’s view, over the next 10 years, F1 will continue to play a role in helping to define future powertrain systems, which may have applications in the wider automotive and mobility sector. “We are looking to reduce emissions and our new objective, for the entire Formula 1 sport to have net zero carbon emissions by 2030, is going to be a big focus over the next decade. There is so much up for discussion,” he concludes. “The degree of future F1 hybridisation and electrification, the types of fuels that we use, the sustainability of those fuels, the emissions that they create. These are the key debates that are currently taking place in our industry, and I think it is all going to make the next decade very interesting indeed.”

Winning in the E race