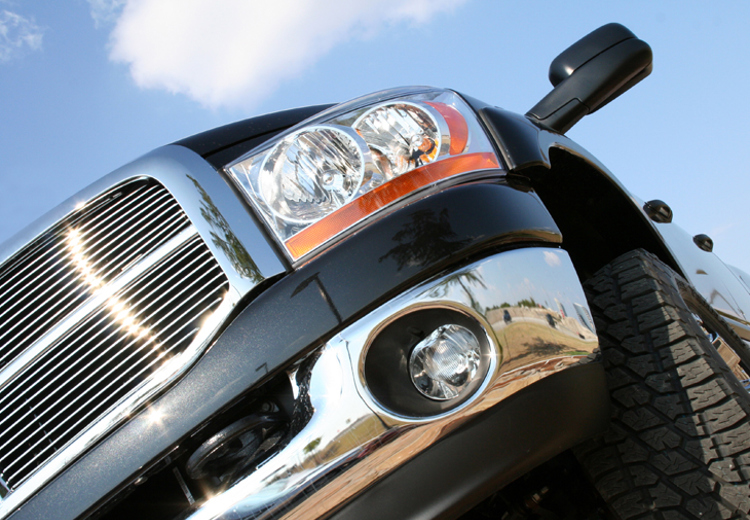 Figures from US Environmental Protection Agency (EPA) and the European Automobile Manufacturers Association (ACEA) show there is still much work to be done to ensure evolving CO2 emissions targets are met. Insight explores both the trends in vehicle CO2 emissions and the part technology innovation is playing in their reduction and also assesses the impact that counter-intuitive consumer purchasing trends are having on emissions levels.

In both the United States (US) and Europe, vehicle CO2 emissions and fuel economy legislation is being regularly tightened, which means reducing these emissions through innovation remains a priority for automotive manufacturers.

In August 2012, EPA and National Highway Traffic Safety Administration (NHTSA) issued a joint final rulemaking for greenhouse gas (GHG) emission and fuel economy standards for Model Year (MY) 2017-2025 light duty vehicles. The standards reduced the average industry fleet-wide limit from the 2016 level of 250 to 163 g/mile of CO2 for MY 2025, which is equivalent to 54.5 mpg (4.3 L/100km) if this level were achieved solely through improvements in fuel efficiency.

In its latest report, the US EPA shows that the average new MY 2019 vehicle sold was near record low GHG emissions, at 356 g/mile, and near record high fuel economy of 24.9 miles per gallon (mpg). However, it is clear that OEMs are struggling to meet Obama-era standards without the use of credits.

The EPA says that only three large manufacturers complied with the MY 2019 standard based on the technology factors of their vehicles alone.

In April 2020, EPA and NHTSA finalised the Safer Affordable Fuel-Efficient (SAFE) Vehicles Rule, which established new light-duty GHG standards for model years 2021-2026. This sets fuel economy and carbon dioxide standards that increase 1.5% in stringency each year from MY 2021 through 2026, compared with the standards issued in 2012, which would have required about 5% annual increases.

From 2021, the binding emission target for new cars will be 95 g CO2/km, which corresponds to a fuel consumption of around 4.1 litres/100 km of petrol or 3.6 l/100 km of diesel. A phase in period will apply, which means in 2020 the target applies for each manufacturer’s 95% least emitting new cars. However, from 2021 onwards, the average emissions of all newly registered cars of a manufacturer will have to be below the target. If a manufacturer’s fleet average CO2 emissions exceed its target in a given year, it will be fined €95 for each g/km of target exceedance for each car registered.

Current research from PA Consulting suggesting that the new 2021 limits could result in €14.5 billion fines on Europe’s top 13 car makers. This data indicates there is much work for car makers to do to move towards their targets and reduce or avoid these fines.

In North America, 56% of MY19 vehicles sold were trucks (Truck SUV, Vans and Pickups) the highest percentage of truck sales on record. While estimated real world fuel economy data for these vehicles has been improving over time, it ranges from 19 to 23.5 mpg vs. 27.5 to 30.9 mpg average for cars. 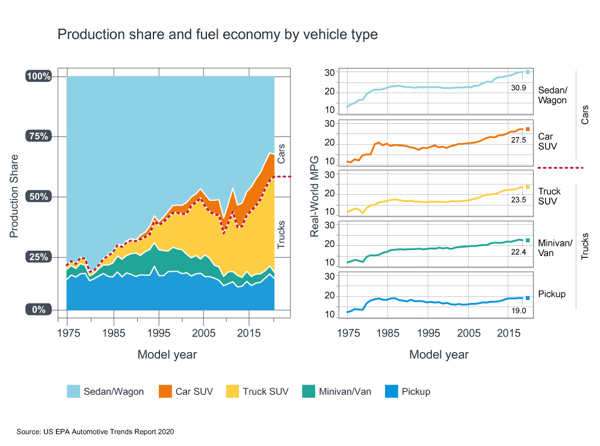 According to the EPA, the trend away from sedan/wagons and towards vehicle types with lower fuel economy and higher CO2 emissions, has offset some of the fleetwide benefits that otherwise would have been achieved from the improvements within each vehicle type.

In the US, light-duty vehicles with engines that operate exclusively on gasoline (including some hybrids) hold at least 95% of the market. Vehicles with diesel engines account for less than 1% while PHEVs, EVs, and FCVs captured 1.7% of the market in MY2019, and are projected to grow to 4% in model year 2020.

In Europe a similar picture of consumer purchasing is emerging. While in 2014 SUVs and MPVs (minivans) accounted for 32% of sales, in 2019 this figure rose to 45% - or 7 million units.

At the same time, we are seeing a switch in fuel use in Europe. In 2016 almost half of new passenger cars sold had a diesel engine, a figure that has fallen to just over 30% in 2019. Over the same period, growth in electrically chargeable vehicles has been slow, rising from 1% to 3%. It is gasoline power that has grown the most, from 46% in 2016 to almost 59% of new sales in 2019. 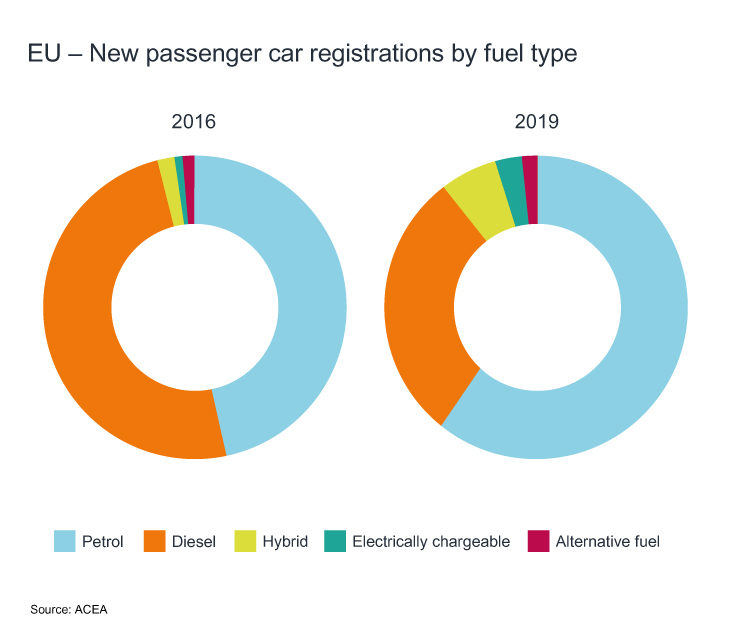 ACEA figures indicate that this trend in fuel use has had a knock on effect on the region’s average CO2 emissions from new cars reported at 118.1 g CO2/km in 2016 - indicating a >4% increase in three years.

This slow pace of change to electric-powered vehicles combined with an increase in sales of larger less fuel efficient models is surprising, given the world’s apparent interest in green initiatives. If the trend continues, it will also make it more difficult for OEMs to meet their future carbon emission targets and to avoid financial penalties.

OEMs are working hard to introduce technologies to help improve vehicle efficiency. In the US, the EPA has looked at the top 14 manufacturers and estimated which emerging fuel economy improvement technologies they would be most likely to use. Its preliminary projections suggest that engine technologies such as turbocharging and gasoline direct injection will be widely introduced. For example, GDI was used in fewer than 3% of vehicles as recently as model year 2008, but was projected to be in 55% of MY 2020 vehicles. Cylinder deactivation will also be employed by some OEMs. The use of transmissions with seven or more gears and continuously variable systems is also expected to increase. And, in terms of electrification, stop start systems are expected to be in 42% of vehicles, while hybrids, plug-ins, battery electric and fuel cell vehicles are a small but growing percentage of new vehicles.

Each of the US manufacturers is incorporating its own unique mix of fuel efficiency technologies, choosing those that best meet the design requirements of their vehicles, and in many cases, that technology is changing quickly.

Looking out five years, OEMs are expected to have different approaches to R&D investment, with some continuing to invest in ICE technologies, while others focus on battery electric vehicles.

It looks likely that by 2026, the use of ICE and stop/start will fall considerably, although they are forecast to still account for some 50% of new installations. The balance is expected to be mainly mild and full hybrids, with some battery electric – and growth here will accelerate as battery technology advances. This will create opportunities to develop specialised e-transmission fluids that can offer hardware protection and improved performance while also delivering electrical properties and could create a need for ultra powertrain lubricants.

But, despite these technology shifts, the ICE looks set to be part of the new vehicle mix for several decades to come. This in turn means that ICE innovations will continue to be a part of the drive to reduce emissions and greenhouse gases and here new lubricants are seen as key enablers, which presents significant opportunity for value creation.

In our view, there will be a growing demand for ultra-low viscosity fluids that contribute to ICE fuel economy improvements. These fluids will need to offer sufficient protection to evolving hardware and aftertreatment systems over longer drain intervals. And, as engine technology continues to evolve in response to environmental, performance and cost pressures, we can expect to see a continued drive for fluids to help increase the number of miles driven on a gallon of fuel, while also improving the overall performance of the vehicle, which is good for OEMs, consumers and the environment alike.