The big news in our last update was the request from OEMs for a supplement to the current API SN specification to increase protection for small displacement, direct injected and turbocharged engines. This includes the new LSPI test (Sequence IX) at a limit of 5 max. for the average number of events.

While OEMs would like the supplement to become effective on January 1 2018, there are issues still to be resolved that will impact its timing.

API donut design for the supplement

API sent out a survey to over 60 members and interested parties to assess readiness, but only 11 responses were received. These varied from requiring no time to one year to prepare. Despite the poor response, API LG has drafted a ballot for API SN PLUS & API SN PLUS RC. This includes tests and limits, symbols to be used, user language and a date for First Allowable Use (FAU) set by API staff. It was presented at the November API LG meeting, where the user language was edited and the API donut design for the supplement addition agreed.

It will be balloted soon and will be out for 30 days, which means the ballot will close after the December ASTM in Houston. This timing means any discussion or resolution of negatives will take place later in December or early next year. The timing, combined with the effort needed to complete the remaining work related to testing, means that FAU is likely to slip to May 2018.

Progressing the API SN PLUS supplement has consumed significant industry effort. However, ILSAC says it will not impact GF-6 timings and that developments here must continue without delay to deliver the performance and fuel economy improvements required by OEMs.

Progress has been made in moving some of the test developments for ILSAC GF-6 forward. But, with much work still to do, and with the seven new tests at different points in their readiness for BOI/VGRA matrix testing, the exact timing for ILSAC GF-6 remains unclear. As a best guess, the first licensing date looks to be at least two years away. 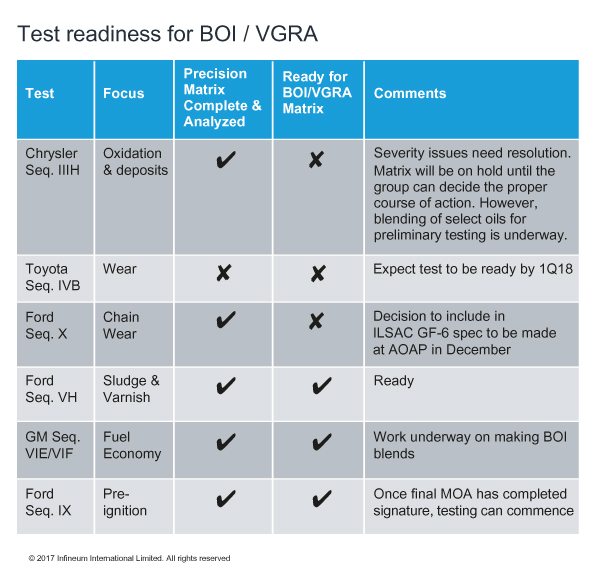 The Sequence IIIH lab severity task force has been working to address the mild viscosity increase trend seen with the Batch 4 pistons. The use of interim guidelines for the Sequence IIIH are still under discussion and it recognised that further delay is needed to allow the new Batch 5 pistons to be evaluated and introduced. There is no consensus on the best route forward for running the BOI/VGRA matrix, so it is on hold until the group can decide on the best course of action.

Good progress was made on establishing Sequence IIIF to IIIH equivalency limits. Statisticians’ conclusions are now with CLOG members for review and a survey is to be sent to members asking for their position on accepting the proposal for equivalency limits for the API C categories. However, it will also be important to consider the impact on older API SX categories.

The precision matrix is well underway and is expected to finish in December, with AOAP/PCEOCP approval targeted in early February. It is now possible that the BOI/VGRA matrix could complete by April or May. A mini-prove out matrix is now complete. The critical operational and statistical reviews should all complete early in the New Year. They will be reviewed by AOAP in January and the stand calibration could be initiated and the BOI/VGRA matrix started in February, with completion possible by April or May.

In November the Surveillance Panel recommended the Chain Wear test as a new ASTM standard, and it now progresses to the AOAP and PCEOCP panels for their endorsement. The test is expected to be ready to start the BOI/VGRA matrices early next year.

Data on VH to VG equivalency were presented to the CLOG. However, with four statistical interpretations, the Surveillance Panel did not agree on a methodology to apply. Because the Sequence VG is still available, the group agreed that this is not a priority and will continue to look at ways to review the VH to VG equivalency data.

For the Sequence VIE, the new short blocks have been introduced, but the test cannot be used for licensing until limits for meeting ILSAC GF-5 requirements have been established. Limits based on the results of a field oil survey have been proposed and reviewed. API LG will now ballot these limits based upon a CLOG recommendation.

The Sequence VIF test is also included for the SAE 0W-16 grade requirements in the API SN PLUS supplement. A ballot to add Sequence VIF limits of 1.7 FEI2 and 3.8 FEISum to API SN RC and for the new SN PLUS RC supplement closed without dissent.

As mentioned earlier, Table G-5 has been updated to include the Sequence IX at a limit of 5 events max. for API SN PLUS & API SN PLUS RC. The BOI/VGRA task force firmly believes that this test cannot be equated to any other tests with historical data. It is therefore asking for the BOI/VGRA matrices to be expedited to put a set of rules in place for the introduction of products to meet the new SN PLUS supplement.

With the final test approvals approaching, the most pressing need is to get the BOI/VGRA matrices underway.

Gaining consensus on how to manage the new tests is essential to allow ILSAC GF-6 to move forward so that the FAU can be firmed up.

In the meantime, the launch date for API SN PLUS & API SN PLUS RC is fast approaching, which means stakeholders have a lot of work to do in the next five months to ensure products are available in time. In our view, consumer education will be an important part of this work.