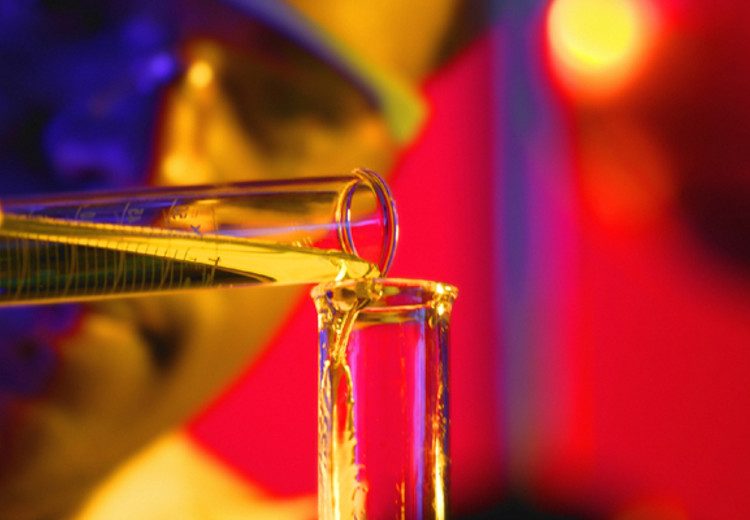 Some of the biggest drivers for change in the heavy-duty diesel vehicle market are improving fuel economy, increasing oil drain interval and reducing tailpipe emissions. Rajiv Taribagil, Infineum Senior Scientist, talks about the impacts these demands are having on lubricant formulations and, more specifically, on the design of next generation viscosity modifiers. 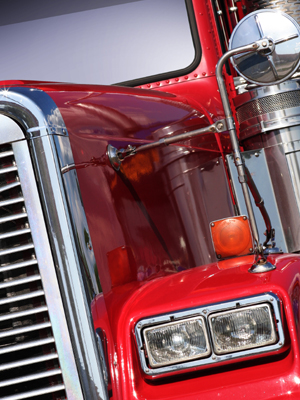 Fuel economy improvement, the first of the three key drivers for change in the heavy-duty diesel (HDD) market, is being propelled by both government legislation and consumer demand for reduced operating costs. In North America for example, fuel consumption standards will require heavy-duty class 8 trucks, beginning in model year 2014, to achieve about a 20% reduction in fuel consumption and greenhouse gas emissions over a 2010 baseline by model year 2018.

The increased focus on fuel economy is reflected in the latest North American PC-11 heavy-duty diesel engine oil category, which will include PC-11B, a new lower viscosity sub-category, which is likely to be licensed as API FA-4. Dubbed ‘fuel economy grades', this is designed to meet the evolving market need for higher fuel economy by introducing lower limits for HTHS viscosity at 150oC of 2.9 – 3.2 mPa.s in SAE XW-30 grades.

At the same time, a few European OEMs are working on the development of lower HTHS engine oils to deliver even higher fuel economy, which in turn require the increased use of high quality base stocks and co-development of hardware and additive technology.

The drive for improved fuel economy makes it increasingly important for next generation viscosity modifiers (VMs) to not only be compatible with higher quality base stocks, but also to provide viscometrics that enable blending of lower viscosity grade oils.

A longer oil drain interval is another feature that end-users increasingly desire from their engine oils. Not only does it help to reduce operating and maintenance costs, but also increases up-time, keeping trucks on the road for longer. However, extending oil drain cannot come at the expense of engine durability and oils must retain their viscosity over their lifetime in the engine.

This requires VMs, which are major contributors to engine oil viscosity, to have the ability to withstand the high shear environment of an engine i.e. to demonstrate high shear stability.

Improving air quality has been a key focus of legislators around the globe, and the reduction of NOx emissions from the tailpipes of trucks has received significant attention. In the early 2000s, North American HDD engines incorporated EGR technology as an effective strategy to control these emissions. EGR achieves this by recirculating cooled exhaust gas back into the engine in order to lower the temperature of combustion and thus reduce the formation of NOx in the combustion chamber.

However, EGR led to high soot loading in engine oils under certain operating conditions, which resulted in further issues such as abrasive wear and oil thickening. Newer engines use a combination of EGR and SCR aftertreatment, which allows them to operate at low EGR rates and limits soot generation. However, it is strongly desirable for next generation VMs to contribute to soot handling to be backward compatible with older engines.

Three different VM polymers – linear, star and diblock - are in common use today. In our experience, the diblock architecture is advantaged in its ability to protect older, current and future HDD engines.

Three VM polymer architectures are in common use today

With sensible base stock selection and careful molecular design the favorable attributes of diblock polymers can be fine-tuned to deliver the benefits required from next generation viscosity modifiers.

Designing the next generation diblock

Infineum’s objective was to develop a new diblock to enable blending of lower viscosity grade engine oils, and to increase formulation flexibility through the use of better quality base stocks, but with a reduced VM treat rate. At the same time, the new polymer needed to retain or improve attributes provided by current commercial diblocks, such as excellent shear stability and soot handling.

To deliver against all these requirements, Infineum has designed a next generation diblock polymer. This contains a polystyrene block engineered to be compatible with better quality base stocks and a revised hydrogenated polydiene block to provide a commercially attractive balance between thickening efficiency and shear stability.

Putting the new diblock to the test

Following the design phase, the second step of Infineum’s development programme was to test the new diblock in finished oils.

Two top tier SAE 10W-40 oils were formulated, one as a reference oil using a currently available commercial diblock in an API Group I diluent oil and a candidate oil using the new diblock in an API Group III diluent oil. In testing, the next generation diblock allowed increased use of heavier base stocks while still maintaining favourable low temperature performance. In addition, the improved thickening efficiency offered by the new polymer meant the VM treat rate could be reduced by 15%.

The next generation diblock delivered improvements over current technology

Delivery of fuel economy through the use of low viscosity grade oils was top of the list of the requirements for engine oils of the future.

By adopting a new blending strategy with the new diblock in an API Group III diluent oil, an SAE 5W-30 oil with HTHS of 3.0 mPa.s and stay-in-grade kinematic viscosity at 100°C (KV100) was formulated without the need to use PAO. Higher fuel economy was observed in an OM 501 LA Euro 5 engine compared against the conventional HTHS 3.5 mPa.s oil, which was blended with a currently available commercial diblock in an API Group I diluent oil. 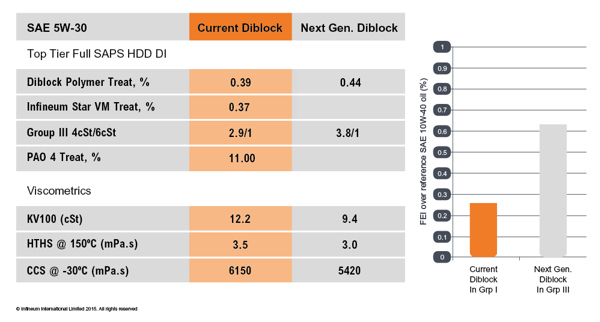 To ensure the bench shear stability demonstration translates to field performance, the durability of the candidate and the reference SAE 15W-40 oils were compared in a field trial in modern high shear diesel powered trucks. These engines are representative of high shear environments that HDD oils would typically experience in vocational and highway applications.

Although the viscosity data has not been corrected for fuel dilution, it remained comfortably within grade all the way out to an extended 35,000 miles (56,327 km) drain (OEM recommendation for this service was 25,000 miles). Also notable was the low wear metal content at the end of the test, which confirmed the long retention of the oil’s lubricating viscosity under the different shear and temperature regimes of the engine. 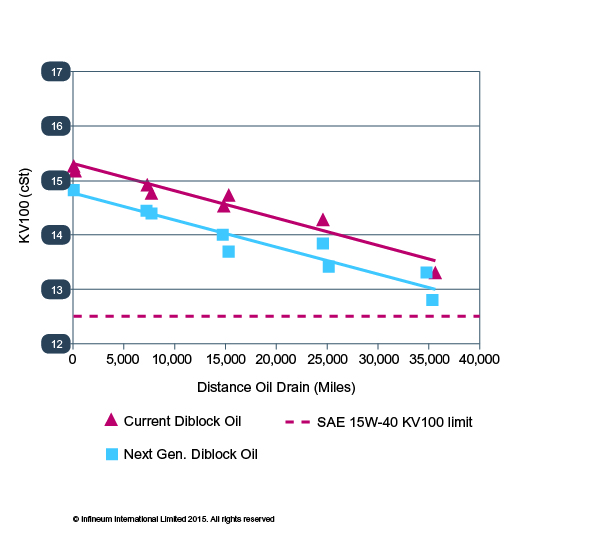 Viscosity remained within grade in the 35,000 mile field trial

The next generation diblock also needed to deliver soot handling capability at least comparable to that provided by current commercial diblocks. An SAE 10W-40 oil was blended to deliver borderline soot handling performance in the Mack T-11 (ASTM D7156) soot handling engine test. When blended with a star polymer VM, without the ability to handle soot, the oil viscosity rose sharply beyond 4% soot content. When substituted with a current commercial diblock, the soot induced viscosity rise was controlled up to 6% soot content – a significant boost in soot handling.

The next generation diblock, with its improved thickening efficiency, was treated 14% lower to match viscometrics. The same boost in soot handling was observed, which demonstrates that similar performance at a lower treat rate has been delivered.

By understanding industry requirements and translating them into a prudent molecular redesign, Infineum has created a viscosity modifier that can meet the needs of current and future heavy-duty diesel engines.