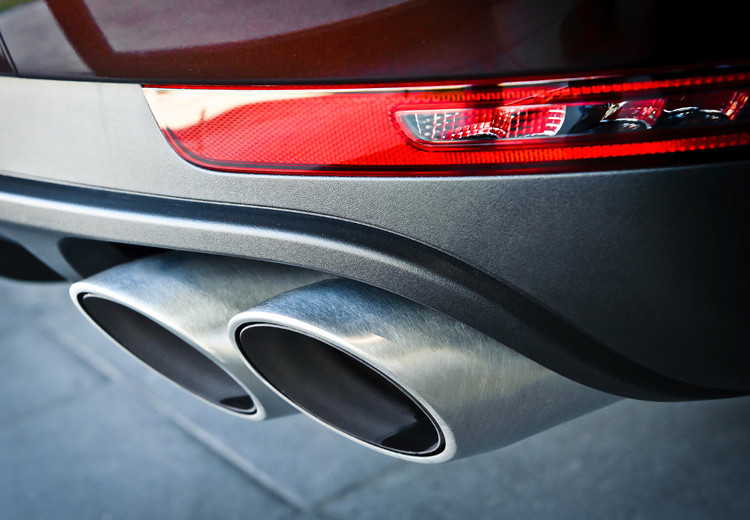 The limits for emissions of CO2 from vehicles are tightening around the world and, at the same time, the test cycles used to measure fuel economy are also changing, which are making them more challenging to meet. These two factors mean that lubricants must be carefully balanced to ensure they can still delver the required performance. Bo Wang, Infineum technologist, talks to Insight about the experience being gained in China following the introduction of the WLTC drive cycle as part of the latest China 6a emissions regulations.

Despite the downturn owing to the global pandemic, passenger car sales in China reached >17.8 million from January to November 2020, just 7.6% below the same period in 2019. The Chinese Government has recently made greenhouse gas (GHG) emissions target pledges at the UN and, in support of these, CO2 emissions from all sources need to be reduced. In the transportation sector, policies are driving for new energy vehicles (NEV) to account for 20% of new car sales by 2025. While in the first 11 months of 2020 NEV sales grew to reach 6% of vehicle sales, most new vehicles going on to Chinese roads still contain an internal combustion engine (ICE).

OEMs are looking for every opportunity to improve the fuel economy of these ICE powered vehicles. One important fuel economy enabler is the use of low viscosity lubricants. We have already seen a move in China from SAE 5W-30 to 0W-20, and interest is growing in even lower viscosities such as SAE 0W-16 and 0W-12. However, the introduction of the new China 6a emissions regulations from July 2020, which use the Worldwide harmonized Light vehicle Test Cycle (WLTC), mean that the formulation of these ultra-low viscosities must be approached in a different way than in previous regulations when the New European Driving Cycle (NEDC) was used.

In the WLTC, vehicles spend longer periods at higher operating temperatures than was the case for the NEDC, which was used in China 5. While lower viscosity oils deliver significant benefits at lower temperatures, for example during vehicle warm up, there is minimal contribution when the vehicle reaches its operating temperature.

A lower viscosity grade oil with better viscometrics will have much less influence in WLTC and will get a lower fuel economy improvement than the same oil run in the NEDC.

For friction modifiers, the friction credit is mainly seen at high temperatures, where the lubricant is thin and boundary contact is possible. These effects have been demonstrated in motorised friction tests, which explore the performance of two lubricants relative to each other across the oil temperature and engine speed range of the engine. 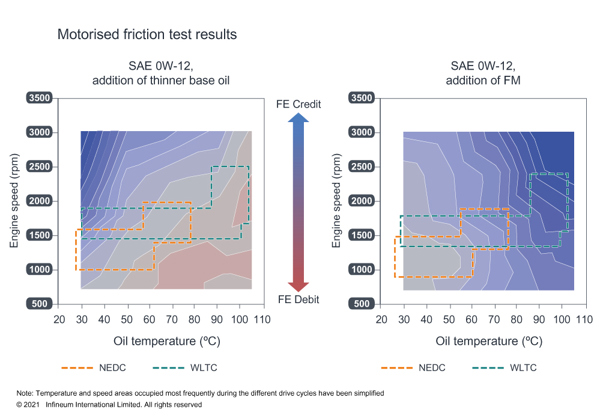 However, viscosity reduction is not the only pathway to improved fuel economy. The WLTC means there is a growing need to focus on the entire formulation and to carefully balance the additive chemistry so that boundary friction can be reduced and fuel economy benefits achieved. This means that not only is the selection of the best friction modifier crucial but also the whole formulation package is important since other additive chemistries may influence boundary friction.

Japanese OEMs have been leading the way in the use of fuel economy lubricants. The new JASO GLV-1 ultra-low-viscosity gasoline passenger car engine oil specification, which includes SAE 0W-8, has been claimable since October 2019. Generally these lubricants are formulated with high levels of molybdenum. However, such a low viscosity oil can be applied to limited vehicle models and different vehicle configurations, engine designs, part coatings and vehicle duty cycles may have specific lubricant needs for optimum fuel economy. Broad testing of fuel economy formulation in different vehicle configurations is essential.

Beyond the question of viscosity grade and molybdenum level, there is the impact of other additives in the formulation and friction modifier selection. Since supplemental additives, at a given friction modifier treat rate, have been found to improve fuel economy, careful additive chemistry optimisation is required to surpass current levels of friction reduction. In addition, the varying results delivered by different friction modifiers in the same engine indicate the need to screen and optimise friction modifiers for certain applications.

Infineum experience with the testing of ultra-low viscosity (SAE 0W-8) lubricants has shown that, even when viscosity and friction modifier levels have been optimised, it is still possible to improve fuel economy without impacting durability performance. 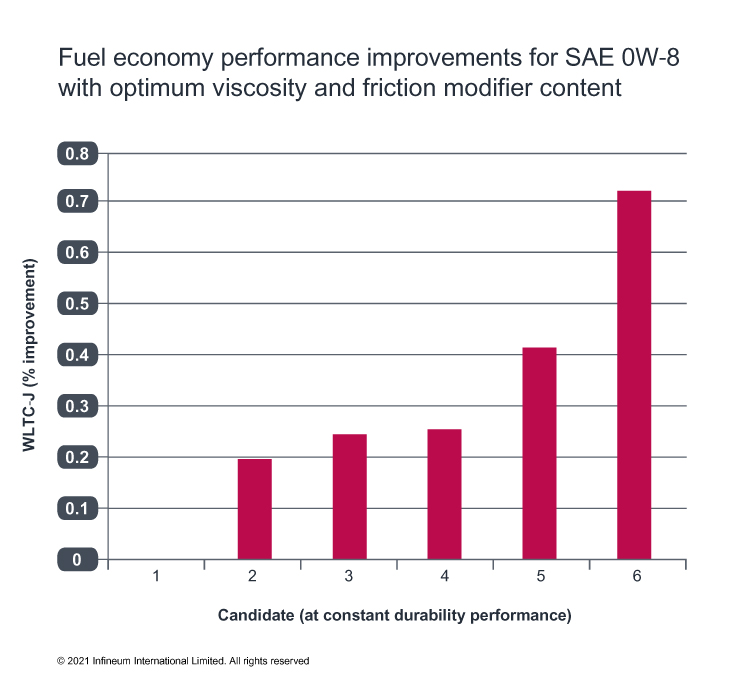 The additive package can be significantly optimised for fuel economy

Building on the findings of extensive testing, Infineum assessed the performance of its technology platform in fired engine tests using a China 6 engine and the WLTC. This low molybdenum formulation, although carefully balanced in terms of friction modifier, was not specifically formulated for fuel economy performance. 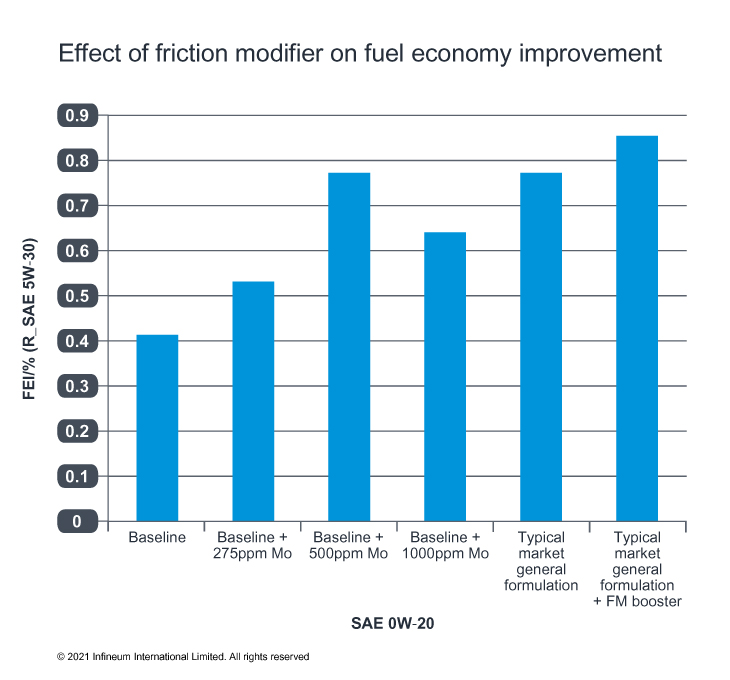 As the interest in the fuel economy performance of engine oils grows, low viscosity oils are becoming increasingly popular. But, as new emissions regulations are introduced that employ the WLTC rather than NEDC, it is important to focus on the entire formulation to ensure fuel economy and durability requirements are met. Tests of various combinations of molybdenum and friction modifiers indicate they may not be equally effective in every engine, which means extensive testing and formulation optimisation is essential. However, our experience shows that a cost effective market general formulation can deliver the same performance in WLTC as a high molybdenum fuel economy formulation.