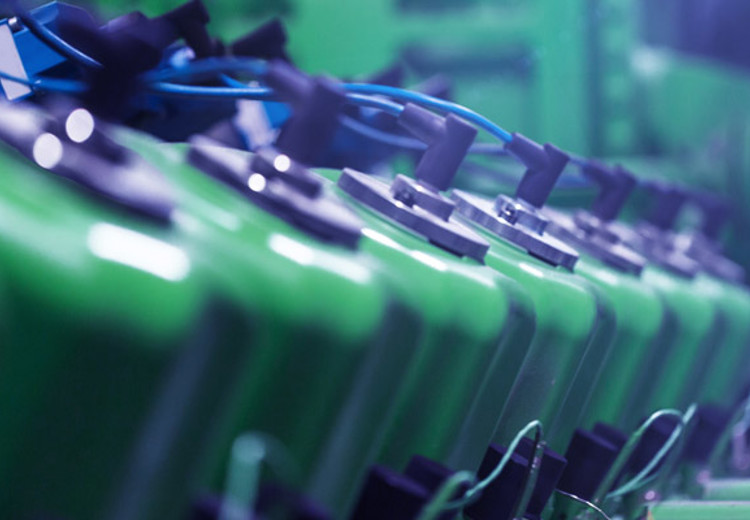 Gas engine manufacturers are introducing large, powerful and highly efficient engines into their product line-up to help customers maximise their returns. These new engines are very different from their predecessors and it is challenging for current oils to meet their lubrication requirements. Infineum has been working to develop next generation gas engine oils that deliver advanced engine protection over longer drain intervals.

As the use of natural gas as a fuel source grows, an increasing number of stationary gas engines are being used to generate power and to move gas from the wellhead to the customer. Engine operators need to maximise the return on their investment, a demand that has led manufacturers to redesign their products. The changes have focused on increasing the engine’s efficiency and power output while reducing emissions such as NOx, methane and other volatile organic hydrocarbons.

Not only are the combustion temperatures and pressures higher, but also piston design changes put the top ring closer to the combustion zone. This means the lubricant here must handle higher temperatures, raising the concern of deposit formation, which may lead to ring sticking and engine damage.

Recent experience shows that conventional natural gas engine oils (NGEO), which for many years have been meeting the lubrication needs of gas engines, are less effective at controlling deposits over sufficiently long drain intervals in these newer designs. This shorter lubricant life in new engines can mean more servicing and more downtime, which equates to higher costs and less productivity for the operator.

To address these issues, Infineum has been using a wide range of tests to gain a deep understanding of the underlying chemistry of the lubricant and its operating environment. This work has led us to conclude that the deposits found in modern gas engines are different to those found in older generations of engines and therefore require new formulation approaches to provide the required level of oil performance.

In high temperature gas engines, carbonaceous deposits occur in many different forms and locations – for example, ring-groove deposits and rocker cover sludge. It is essential for lubricants to either prevent deposits from forming or to stop them building up on engine surfaces.

Increasing the thermal stability of the lubricant to slow its degradation is one method used to prevent deposit formation. However, in the high temperatures and pressures encountered in the latest gas engines, the lubricant will eventually degrade and produce deposits. When this occurs, oils formulated with the correct balance of dispersants and detergents along with other additives can keep the deposits in solution, preventing their build-up on engine parts.

NGEO drain intervals are determined by in-service testing of a number of parameters. However, aside from physical inspection, it is very difficult to screen for deposit build up in used oil analysis.

Formulators must be confident that, as oil drain intervals are extended, this does not lead to excessive deposit build up as the oil ages.

When any one of the condemning limits is reached an oil change is triggered. In this market, to keep utilisation rates up and running costs down, it is important for these oil changes to coincide with the standard service maintenance interval. Oils must be capable of reliable operation beyond this period so that they do not force the engine out of service for unscheduled maintenance.

To effectively formulate against deposit build up Infineum has been using a number of techniques to study the chemical and physical nature of the deposits found in natural gas engines. 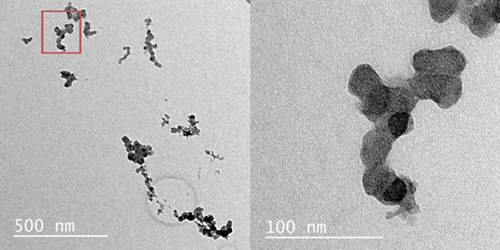 Transmission electron microscopy (TEM) revealed that deposits found in engine oils were similar in size and morphology, irrespective of from where in the engine they were collected. 90% of the particles, which in appearance and size were comparable to those found in diesel engines, fell within a range of 11–36 nm.

While the particles viewed by TEM all appeared similar this does not preclude deposits with a different final structure forming in different parts of the engine. Scanning electron microscope (SEM) analysis revealed different topographies dependent upon the location of the deposit in the engine. Those from the rocker cover, for example, formed stacked lamella-like layers whereas those isolated from the engine oil and filter formed amorphous particles in the micron size range.

As well as size and shape, the way dispersant additives interact with deposits, and ultimately their effectiveness at maintaining engine cleanliness, is dependent on the elemental and surface chemical composition of the deposits themselves. Energy-dispersive X-ray (EDX) analysis of deposits from the oil filters showed that the gas engine deposits had a much higher oxygen:carbon ratio than HDD soot. In addition, the gas engine deposits contained higher concentrations of calcium, zinc, phosphorous and sulphur the presence of which could be attributed to lubricant additives. 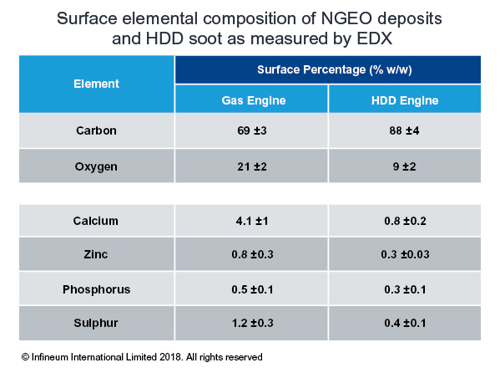 These results further support the view that the deposits are formed from combustion of the lubricant rather than any fuel contribution.

Further spectrographic analysis revealed that when compared to HDD soot a much lower proportion of the carbon atoms present in NGEO deposits were graphitic. This could be one reason that NGEO deposits may be more difficult to disperse effectively, since there are fewer graphitic sheets to which the lone electron pairs in the head of the dispersant can bind.

Despite the similarities in size and shape to HDD soot (certainly when initially formed), there are clear differences in the elemental and chemical composition of the deposits found in a modern gas engine. These new deposits, which have the features of both soot and sludge, are the key reason that new and novel formulation approaches, different from those used for lubricants in other engine types, are now required.

It is now absolutely essential to choose the correct additive chemistry and base oil combination based on deposit type and the knowledge of the behaviour of the deposit to ensure effective cleanliness is provided over longer drain intervals for the very latest engines.

Designing lubricants that are effective in new high BMEP gas engines is challenging and requires expert knowledge of all the relevant components and chemistries. By top-treating used oil with different dispersants and dispersant combinations and measuring the change in counts by focused beam reflectance measurement (FBRM), formulators at Infineum have developed novel formulation strategies for modern gas engines.

All this work has enabled us to reformulate NGEOs with new high performance additives and high quality base stock combinations, and several candidate oils have shown excellent results in testing.