Full speed ahead for Group II

Group II base stocks are increasingly being used in marine oils. Winson Ang, Lead Technologist for Infineum Lubes Deployment, talks about the drivers for their use, the benefits they offer, and the solutions Infineum has developed to overcome the challenges they present.

Trunk piston engine oils formulated using Group I base stocks and salicylate technology have delivered robust lubrication performance to medium-speed, four-stroke ship engines, burning heavy fuel oil, for many years. However, trends in automotive crankcase lubricant formulations, which account for over half of the base stock utilisation, are impacting the supply and demand balance of base stocks globally. As the automotive sector looks to improve fuel economy and reduce emissions their use of high quality Group II and III base stocks is growing, which has resulted in a reduction of Group I capacity over a number of years.

Over the same timeframe there has been a significant increase in the availability of Group II base stocks as new plants and capacity additions have come on stream. This increased availability has driven down the cost of Group IIs, making their use in applications other than automotive crankcase oils increasingly attractive.

With no investment in Group I production on the horizon, a shift to Group II for TPEO seems inevitable.

Although this change has the potential to bring benefits to future TPEO formulations there are challenges that must first be overcome.

The main challenge of using Group II base stocks in TPEO formulations is related to fuel contamination of the lubricant. Most four-stroke medium speed engines run on HFO, which contains asphaltenes - large polyaromatic species of undefined structure. During engine operation, these species can migrate into the oil via fuel contamination where they may agglomerate.

Marine lubricants must be able to handle asphaltenes to prevent them from agglomerating and forming ‘black sludge’ in the engine.

Black sludge is detrimental to normal engine operation because it can lead to high levels of deposit formation, which can result in piston deposits, choked oil galleries and oil starvation.

Oils formulated in Group I base oils with salicylate technology have demonstrated, over many years of field operation, their excellent asphaltene handling capabilities and their ability to protect the engine, extend oil drain intervals and reduce operating costs. But, the lower solvency of Group II base oils means they are less able to handle asphaltenes, and a new additive system is required to ensure TPEO formulated in these base stocks deliver the required level of engine cleanliness.

The first task in the development process was to gain a better understanding of the mechanism of asphaltene agglomeration. Using a new technique, developed by Infineum, which measures particle sizes between 0.1 and 300 microns, it has been possible to examine the aggregation of asphaltenes and to detect the onset of agglomeration.

The data obtained using the new test demonstrated good correlation with a recognised marine engine test. It was therefore possible to use the new method as an indicator of the asphaltene handling capability of marine formulations in different base stocks when contaminated with HFO.

The new test method enabled Infineum to fast-track the development of a new additive booster package. When used together with salicylate-based TPEO additive technology it is possible to address the asphaltene handling deficit of TPEO blended with Group II base stocks. 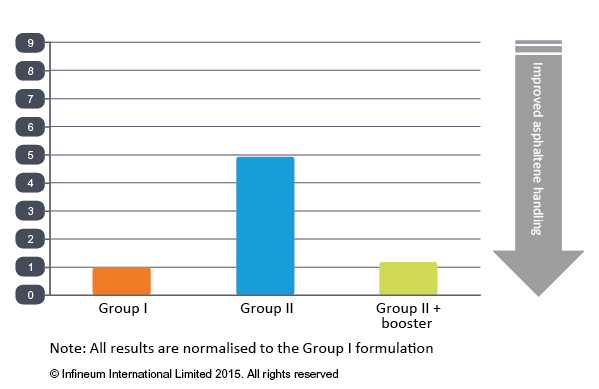 The new additive package means that Group II TPEO formulations can deliver the same level of asphaltene dispersancy as those formulated in Group I, while bringing additional benefits derived from the higher quality base stock.

Group II base stocks have a number of benefits over their Group I counterparts. These include better oxidation control, improved NOACK stability and enhanced viscosity control. Having addressed the challenge of asphaltene handling, Infineum was able to assess the potential for Group II base stocks to assist in oxidation and viscosity control and BN retention - all areas of particular concern in TPEO applications.

Oxidation is one contributor to engine oil deterioration. Thermal stress and the presence of oxygen lead to the oxidation of the lubricating oil, which subsequently results in an increase in both oil viscosity and acid number as well as the production of insoluble compounds. The GFC Oxidation Test (GFC T021-A-90), a bulk oxidation test method, was used to study this mode of oil degradation.

Although not an exact replication of engine conditions, the test can differentiate between the resilience of different TPEO formulations to oxidation, when subjected to extended high temperatures, in accelerated bulk oxidation conditions. This makes it a useful screener test for comparing different lubricating oils.

Three test oils were formulated using different Group II base stocks, which were run against a Group I reference oil. All the Group II formulations demonstrated better oxidation control compared to the reference. 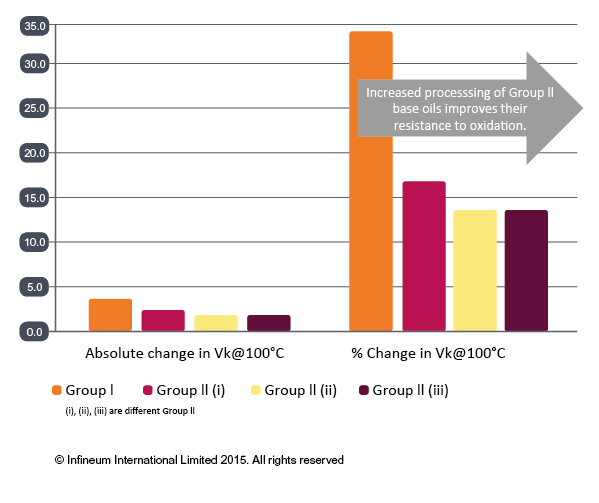 Perhaps, not surprisingly, the TBN retention performance of the four oils mirrored that of the viscosity change in the GFC Oxidation Test. The three Group II oils performed discernably better than the Group I reference oil. 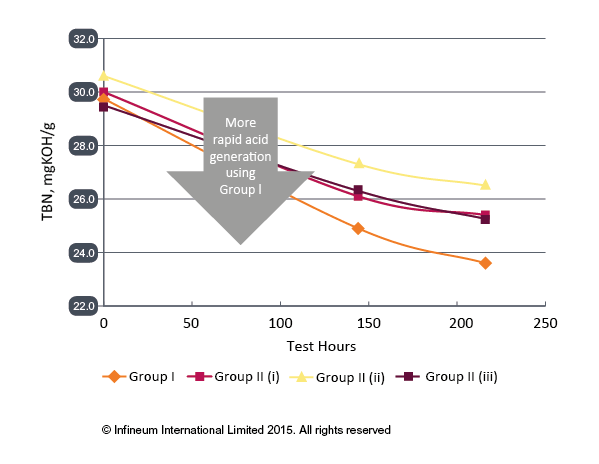 Testing carried out in a Wärtsilä 4L20 engine test showed that a Group II formulation using the booster additive chemistry delivered a better level of deposit control performance than a Group I base stock.

The performance of Infineum’s salicylate-based TPEO technology and the new booster additive package in Group II base stock was then further assessed in a full scale 12,000 hour field trial on-board a cargo vessel. Used oil analysis conducted during the field test showed good control of viscosity increase and TBN retention. End-of-trial inspection revealed excellent cleanliness of the piston, ring pack area and piston undercrown, as well as in the crankcase area.

The new booster additive technology enables TPEOs to be blended using Group II base stocks without sacrificing the asphaltene handling capability of traditional Group I formulations. In addition, the booster offers formulators an opportunity to potentially take advantage of the benefits Group II base stocks can deliver.

While it is relatively easy to reproduce the benefits associated with Group II base stocks in bench and engine tests, the high variability experienced at sea means they are not always so apparent in field testing. Engine operation conditions, including slow steaming, the degree of HFO contamination and the engine maintenance schedule can all impact upon the results.

Infineum is conducting additional field verification of the new boosted TPEO to confirm the initial performance improvement trends observed in Group II base stocks. The aim is to enable marine lubricant formulators to reap the oxidation control, TBN retention and slower viscosity increase benefits that can be provided by Group II base stocks. At the same time it is essential to deliver the same – or even enhanced – performance and protection they have come to expect from Group I products.