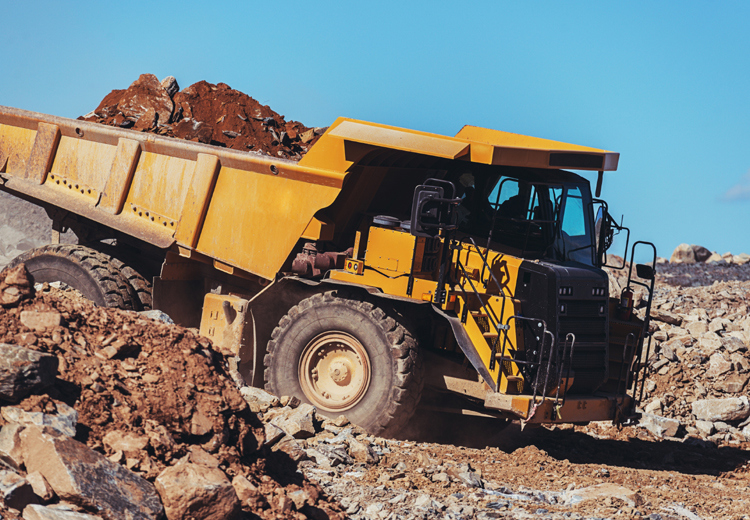 Heavy-duty engine oil formulations meeting API CK-4 and FA-4 have now been in the market for just over three years. As the industry continues movement towards lower viscosities, Insight talks to Caterpillar's Fluids Technical Expert, Hind Abi-Akar, about her views on the need for continued bifurcation to ensure future formulations meet the diverging needs of on-road and off-road vehicle applications.

API has been publishing engine oil standards since the 1940s, which have generally been developed to protect new and existing engine technologies, meet government regulations and ensure appropriate tests are in place. In 2016, API introduced two new service categories API CK-4 and FA-4 at the same time, something it had not done since API CF and CF-2 in 1994.

“API oil categories set the quality level for heavy-duty (HD) engine oils and help customers to select the right product to protect their engines,” Hind explains. “Driven by on-road greenhouse gas emissions regulations, the new API FA-4 has a lower high temperature high shear (HTHS) viscosity limit than the other categories. This means API FA-4 is the first on-road specific category and, unlike all the other categories, it is neither interchangeable nor backwards compatible with API CK-4, CJ-4, CI-4 with CI-4 PLUS, CI-4, or CH-4 oils.”

As expected, the industry uptake of API FA-4 oils has been relatively slow so far.

While more than 1,350 API CK-4 products have been licensed, API FA-4 licenses have only just passed the 100 mark. Despite these numbers, Hind does see a potential role for lower viscosity lubricants in HD applications, albeit application specific.

“I can see an interest in the use of lower viscosity engine oils,” she confirms. “This is not only driven by the potential efficiency improvements they can deliver but also, as light-duty oils trend to lower viscosities, end users are looking for commonality of supply to help reduce maintenance costs. However,” Hind continues, “in addition to potential fuel economy savings, lower viscosity oils may also deliver other benefits. For example, we can get the oil to critical components more quickly on startup, close the oil filter bypass valve faster to allow more filtering time and we can achieve more effective cooling for components. But, these gains must be carefully balanced with durability – because the latter is absolutely critical for HD engines.”

For off-road Caterpillar engines, Hind sees a number of key oil viscosity considerations, but specifically notes oil film strength throughout time to oil drain as being critical. “Low viscosity oils must maintain adequate film thickness at high loads, high temperatures, high flow rates, high pressures and in the presence of contaminants. We need to use shear stable viscosity improver additives to ensure they do not break down from repetitive shear events in sliding contacts such as the piston-ring-liner interfaces. In addition, it is essential that the oil film is robust to oxidative and thermal degradation and, particularly important in off-road applications, is also robust to contamination and debris interference.”

“In the challenging conditions encountered in today’s off-road HD engines, it is absolutely essential that the minimum oil film thickness for critical component interfaces is maintained.” 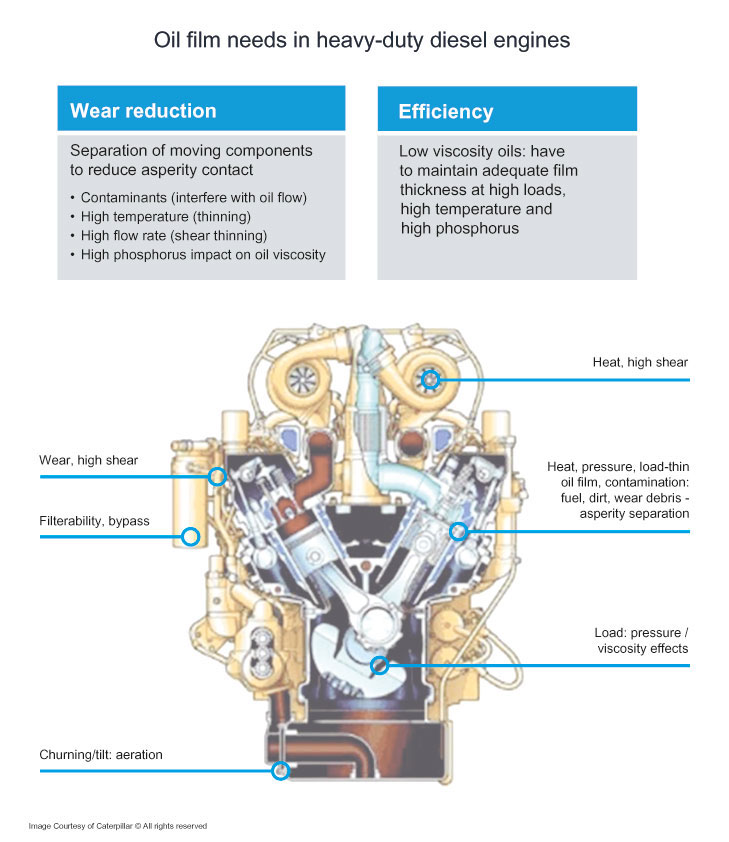 Clearly viscosity and film thickness are both critical for HD applications. For off-road applications where debris/contaminants are present, these become even more vital and, as Hind explains, when they are low or inadequate the impacts on the engine can be very significant.

“We can see wear and debris polishing of the main and upper connecting rod bearing surfaces and crankshaft journal, and increased wear on the piston-ring-liner and on the valves, cam and rollers. To prevent these issues and ensure engine durability is maintained, the oil film must be robust to small dirt particles and agglomerated contaminants in the oil and its thickness must exceed the size of the particles we might expect in the oil. Over its lifetime in the engine, the oil is subjected to performance changing mechanisms including oxidation and thermal degradation, evaporation and contamination. These can increase deposits, sludge, corrosion, wear and filter plugging while reducing oil cleaning and cooling functions, which is why we place a very high priority on the ability of the oil to maintain performance over the entire drain interval.”

So, the question here is could API FA-4 be used in off-road applications to deliver fuel economy, while providing the level of durability required in such a challenging environment? According to Hind, based on the severity of the operating conditions that drive oil film into the mixed and boundary regimes, as well as the work environments that expose the engines to dirt and contamination, the answer is no.

“Just to reiterate,” says Hind, “currently low HTHS API FA-4 oils are not allowed in HD off-road engines. This is mainly owing to the fact that the robustness of the oil film has not yet been validated at the high temperatures, pressures and loads common in these applications. But, there are still concerns that debris contamination might overwhelm the film thickness and cause permanent damage. When you consider the fact that fuel economy benefits are uncertain, we need significant testing to gain confidence in these low viscosity oils before we use them in our engines. However, we must ensure that the tests used to do this validation work accurately reflect all aspects of the performance of the oil in an engine. In my view, extensive field testing will also be essential in any qualification work.”

“Right now, without the guarantee of pure hydrodynamic operation and perfect cleanliness we are unlikely to see the use of low viscosity API FA-4 oils in demanding off-road applications.”

Looking ahead, it seems likely that there will be a new API category development in the next few years driven primarily by the lack of available current tests, changing engine performance requirements and evolving emissions regulations. Perhaps when the new category development starts, industry should also take a harder look at the continued appropriateness of the current categories, which date back to 1998.

“In terms of the tests, we have a number of older tests in the current category, which may need to be replaced,” Hind confirms. “At the same time, we need to ensure that all of the tests used to determine critical oil functions are sufficiently robust. Engine technology continues to evolve, which will drive the need to again improve the oil’s oxidative, thermal and shear stability. In addition, the push for extended oil drain intervals, variations in fuel quality globally and the need to protect aftertreatment systems are other factors that may prompt a new category development. Finally, as I look ahead, I see a widening in the requirements of regional and global emissions regulations as well as emissions regulations governing on-road vs. off-road vehicles, which to me reinforces the need for two separate API heavy-duty engine oil categories in the future.”