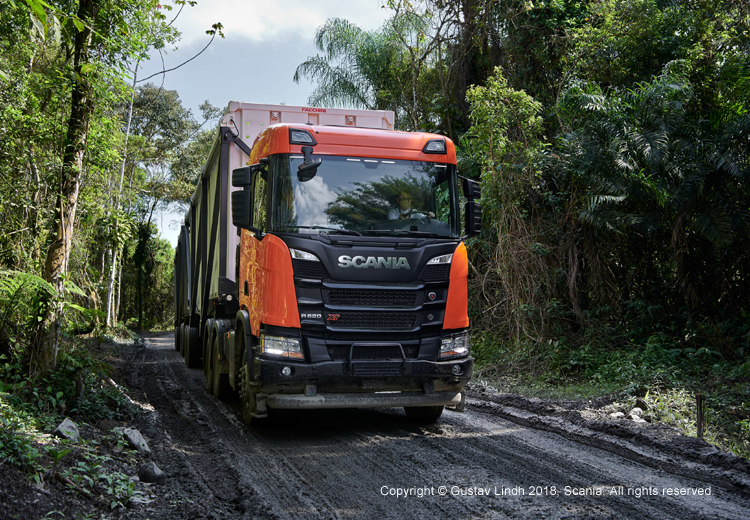 Working conditions for trucks operating in agricultural and mining operations are generally very severe - heavy loads, high power and dusty conditions - demanding a robust engine oil. But, add on the high ambient temperatures and variable fuel quality encountered by trucks operating in countries such as Brazil, India, Indonesia, South Africa and the engine oil must work even harder. Field trials of new formulations have been so encouraging that a Scania engine oil performance level, Scania HD, has been defined around them.

Unlike other heavy-duty vehicle OEMs, who rely on engine tests to determine the effectiveness of engine oils, Scania bases its lubricant developments on extensive field testing. This is because in Scania’s view it is difficult to cover all of its requirements with bench and engine tests alone.

The first Scania Long Drain Field test or LDF standard was introduced in 1996 to ensure that oils used in their engines could withstand prolonged operational stress in various climates. The ‘long drain’ element means the oils and engines are tested to ensure they deliver extended oil drain intervals, without compromising engine durability. Since the standard’s introduction, Scania has issued new generations of the Scania LDF oils in line with the evolution of its engines. Scania LDF-3, which was introduced in 2010, is backwards compatible with all the previous Scania LDF generations.

The Scania LDF-3 oil quality accreditation is recognised in the industry as being extremely severe and very tough to pass. It typically takes in the region of two to three years to complete the required field tests, after which many different parts of the engines are exhaustively inspected for sludge, wear, oil degradation and deposits. While cylinder protection against wear is very important, the oil is not approved unless all of the other criteria are also passed.

Along with Scania LDF-3, the OEM also offers Scania E7 quality oils to its customers in Brazil, which satisfy the European ACEA E7 lubricant performance level. These Scania E7 lubricants are usually formulated using mineral API Group I base stocks or the Group II categories, which are now also available in Latin America. Scania E7 is readily available in Brazil since this quality segment is also linked to the API CI-4 lubricant specification, which is widely sold for heavy-duty vehicle applications in Brazil.

Scania has also identified the need for a robust, cost efficient lubricant performance category to withstand the very challenging working conditions that Scania trucks and engines encounter in the world’s emerging regions.

In these regions, vehicles operate in high ambient temperatures, in wetter or dustier environments, in off-road environments, with full loads and/or at full torque at low engine revolutions. Such situations are encountered, for example, in Brazil in mining or in the sugar cane fields. In these applications up to 91 tons can be transported in arrangements called ‘Super Rodotrem’, which are trucks carrying carriages of 4.4 metres high and 30 metres total length. 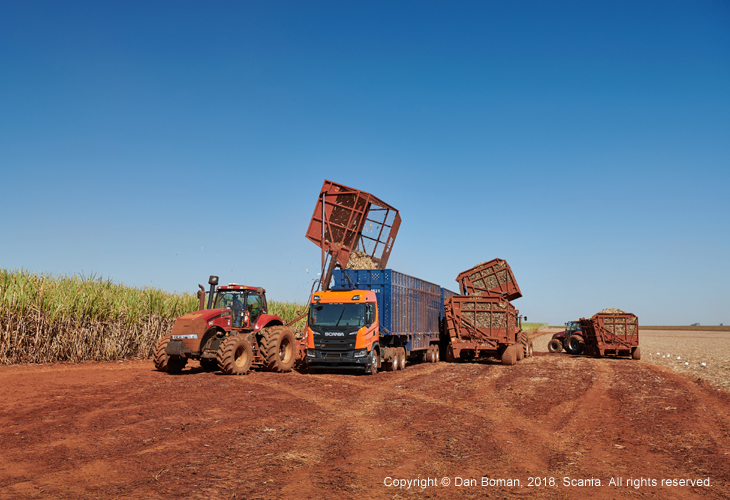 An added concern for Scania is the quality of available diesel fuel in various parts of Latin America and other emerging regions, where sulphur levels can still exceed 10 ppm. In addition, in some countries, the biodiesel content in diesel fuel is well above B7 (7% biodiesel in diesel fuel), which is the current European standard.

With these challenges in mind, Scania defined the Scania HD oil field testing protocol, which is conducted in severe mining or similar service where the typical diesel fuel consumption may exceed 5 litres per 10 km. In these gruelling conditions, the total base number of ACEA E7 oils can decrease rapidly with use and, in some cases, it may be necessary to cut the oil drain interval to 15,000 km to ensure the engine is sufficiently protected.

From 2014 and 2018, Scania conducted various field trials using a fleet of trucks in Brazil. The aim was to assess the technical feasibility of achieving an engine oil quality performance level that could meet these severe service demands while delivering a longer oil drain interval than the ACEA E7/ API CI-4 oils. This required the development of new oils using a reinforced additive package that could meet the performance goals set, while also keeping the finished lubricant cost under control.

The results obtained were so encouraging that a new Scania engine oil performance level – Scania HD - has been defined around these tested oils. 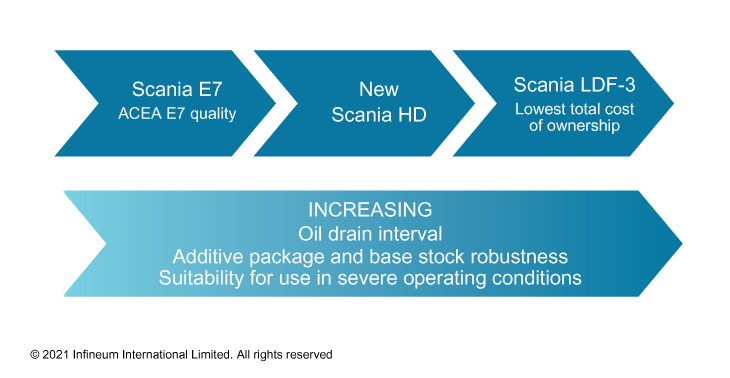 Despite the severe service, the oil strength allowed the drain intervals to be extended during the test from 15,000 km, the performance base established by the API CI-4/ ACEA E7 oils, to 30,000 km, even for the most severe truck of those tested. These drain intervals were determined by a detailed lab analysis of the used oil samples obtained during and after drainage. 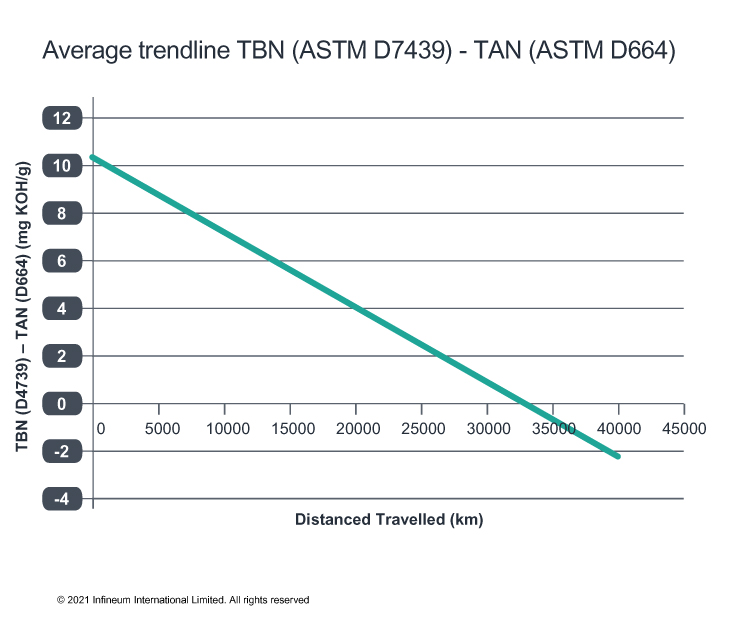 At the end of test, the engine was dismantled and carefully inspected by local and Scania’s own inspectors. The results obtained, in terms of engine cleanliness and wear protection, were very satisfactory. Despite the substantial extension of the oil drain interval achieved with the Scania HD oils, the engine showed improved cleanliness at the end of the field test when compared to the API CI-4/ ACEA E7 oils. The pistons, liners and valve train inspected were in good or very good condition. 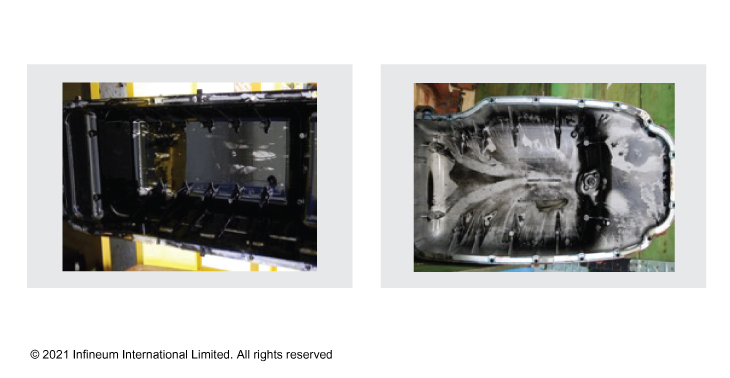 Images showing oil pans: on the left, truck in similar service at end of field test using API CI-4/ ACEA E7 in a Scania Euro III engine and on the right, using Scania HD in a Scania Euro V engine

In an effort to make these performance, protection and extended drain interval benefits available to end users in a range of geographies, Scania is assessing the best way to introduce these Scania HD oils into its service network. Infineum has worked with the OEM on the use of different base stocks to formulate oils with Scania HD performance. And, as a result, Scania has validated Infineum technology in a range of API Group I and II base stocks for Scania HD that will support its wider use across the globe.

The inside on haulier decisions

The rise of re-refining